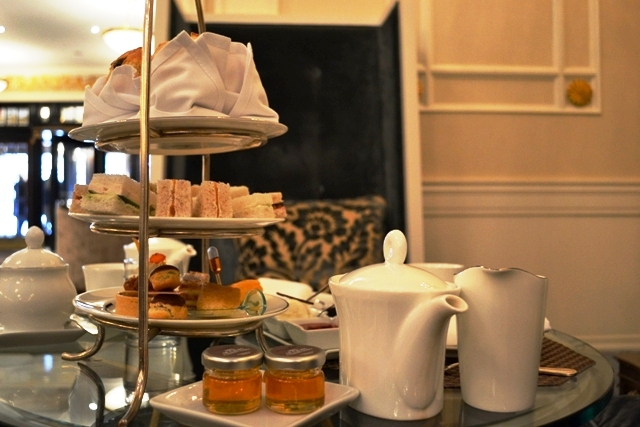 By now, you’ve probably been to Mile End’s new tea room. At Cardinal, one can experience a rare moment of British history in Canada’s least colonial city—i.e. sitting down to tea and scones like proper English gentlefolk. Though the Sparrow-adjoined space is the latest expression of Montreal’s love for refined caffeination, fancy tea is no new thing.

Despite its effortless Victorian–chic ambience, Cardinal aims to make the kind of tea Queen Victoria drank accessible to the rest of us plebs by fostering a casual atmosphere. You don’t need reservations, mild manners or deep pockets to sip the Cardinal’s tasty brews. And that’s all well and good for most of us, but if you actually want the royal treatment, you go to the Ritz.

Since the Hotel St. James stopped its service in 2009, the Ritz became one of the city’s only destinations for deluxe afternoon tea (the other being the Fairmont/Queen Elizabeth Hotel). From 2010 to 2012, Montreal’s century-old Ritz-Carlton was restored to its former regal, neo-classical glory, recalling an era when three quarters of Canada’s wealth resided within a three-block radius of its walls. Much of the original façade, moldings and architecture have been maintained—a fact that is immediately evident upon entering the lobby’s Palm Court.

The Palm Court, an open room bedecked by softly lit chandeliers, an actual fireplace, and enough pastel velvet to make anyone feel like a queen, is the first thing you see as you walk through the Ritz’s gilded revolving doors. This is the room where Paul Giamatti’s fictional wedding receptions take place in the film Barney’s Version. It’s the room bordering the ballroom where Elizabeth Taylor and Richard Burton got married in 40 years ago. It’s the room that former Ritz-Carlton owners once sat above, sipping cognac, spying on the hotel’s new guests, who were among Canada’s richest. It’s a room that offers a rare glimpse into Montreal’s ghostly British history. Appropriately, this is the room where Afternoon Tea is served.

Though I fully appreciated the irony of partaking in such a British ceremony at the height of provincial-election season, I can hardly regret spending a late-March Saturday afternoon pretending to be a richer, better looking, more luxurious tea drinker than I actually am. Afternoon Tea at the Ritz is served in two sittings, at 1:30 and 4:30 p.m., beneath a ceiling of painted palms that turn the Palm Court’s pastel sophistication into a sort of elegant jungle. When I arrived for the 1:30 sitting, three couples had already been denied for not making a reservation (don’t make the same mistake if you plan on attending; their shame was palpable).

You can expect to pay about $80 for two, and that’s without champagne. The nosh includes an elegant silver platter of warm English scones, crustless sandwiches (including tomato, smoked salmon, cucumber and chicken), and about six of the most beautiful miniature pastries I’d ever seen. Did I mention clotted cream? In true British style, the scones come with both clotted cream and rose jelly.

The server assured me that all items on the menu are made in-hotel, something not all hotels offering tea service can boast of, especially those providing “Devonshire cream.” “We call it clotted cream on our menu because that’s what it is. We made it here—not in Devonshire,” our server reflected proudly.

Trust me, after that plate of refined deliciousness, the tea was hardly even the main event. However, the Ritz supplies a lengthy list of flavours, and each tea drinker receives their own English-style china teapot.

All this pomp and ceremony transforms tea into a social beverage, like beer, rather than the solitary way that I’m used to drinking it—when I’m cold and sick. Drinking tea with friends should be a celebratory event draped in ritual, if only performed once in a blue moon. Let’s be serious—it’ll never replace a cup of morning joe. ■