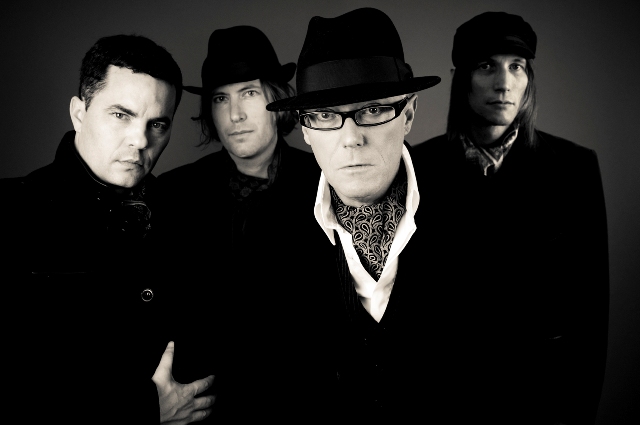 David J and the Gentleman Thieves

Very few artists can claim to have a career as rich and varied as David J’s. As a founding member of Bauhaus and Love & Rockets, he helped to define music in the ’80s and ’90s.

Never one to stay in a comfort zone, David has constantly immersed himself in diverse projects, whether it be collaborating with comics writer Alan Moore (V for Vendetta) or writing and recording with Amanda Palmer and Jane’s Addiction.

Over the last few years, he’s written plays, books and more songs. His new album, An Eclipse of Ships, is a return to the acoustic sound that characterized his earlier solo records.

I had the chance to catch up with David J ahead of his first visit to Montreal in two years.

Pablo: Is your new album a bit of a reaction against 2011’s Not Long for This World?

David J: I never plan these things. Maybe subconsciously there’s a reaction there but it’s not a conscious reaction. I mean that album was about death and this album is about life and romance. It’s really a love letter to women. It was a joyous, joyous thing, Pablo. Most of the songs were written in a couple of days before I recorded them, so they’re all fresh.

P: How did the idea come about for reinterpreting “Bela Lugosi’s Dead” with Jill Tracy?

DJ: I’ve played that song a couple of times with Jill when I’ve been in San Francisco, where she’s based. She came up with this interpretation, which is sort of like a classical Beethovenesque introduction that sets the tone for the rest of the cover.

I mean I was aware (laughs) that it was a very rather audacious thing to do. If I was to try to do a new version of that song, it had to be very different and I was really pleased with the way it turned out.

We did it in one take with the vocals, everything live. It was a real moment — we never rehearsed the whole thing all the way through. We just got into the feel of the thing and recorded it. And I did get a good reaction from the other members of Bauhaus. That was pleasing (laughs).

P: Was your play, Silver for Gold, only staged on the West Coast?

DJ: Yes, it was staged most recently a couple of years ago at the REDCAT, a great space in downtown L.A. It’s constantly evolving, that piece. In fact I’ve re-titled it: Privileged: The Odyssey of Edie Sedgwick. I came up with this new song, “Privileged,” which now I can’t imagine the piece without it because it’s such a key song, an uptempo song. It’s given it another burst of energy for me.

It’s definitely something I’m going to go back to and work again. I really want to take it to New York, maybe Broadway. It’s such a New York story.

P: You’ve been working on a memoir — could you tell me a bit about that?

DJ: Sure! Well, it’s finished. It’s going to be published probably later this year through Jaw Bone press, which is a London-based publishing house. It’s about Bauhaus; it’s called Who Killed Mr. Moonlight? Bauhaus, Black Magic and Benediction, and I’ve worked on that for five years. It was a big project.

P: What can we expect at next week’s show?

DJ: A very different band to the last time. It’s a band called the Gentleman Thieves. It’s a bigger sound. Joel Patterson, one of the best drummers I’ve ever played with, incredible, and a really good guitar player Tommy Dietrick (ex-Brian Jonestown Massacre) — they’re from a band called Sky Parade, a psychedelic rock band in L.A. And my manager/bass player Darwin Meiners — we switch the bass at the end, so I play some bass.

We play Love & Rockets songs — it fits the sound — but we’re going to play quite a few from the new album, yeah. You know “La Femme de Montréal,” I wrote that in Montreal… ■