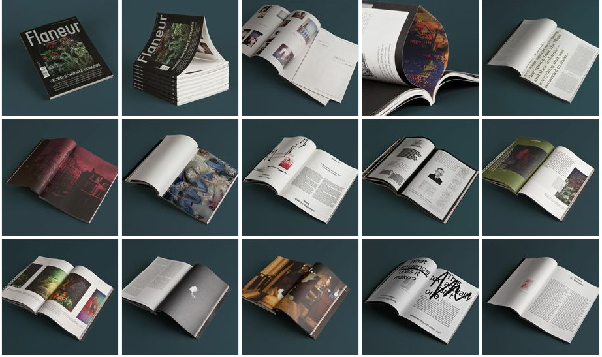 For paperphiles and bibliophiles, Berlin’s biannual magazine Flaneur is the stuff that dreams are made of. It’s a large, weighty publication whose thick paper stock captures the perfect aroma and texture — flipping through the pages of their second issue brought tears to my eyes. It is a thing of beauty.

And it’s not only how it looks, but the content that’s brilliant. Flaneur’s concept is truly unique. They choose a street in a different city for each issue and then manage to capture the essence, or heart and soul, of that neighbourhood/community in the pages of their magazine. Their first issue was devoted to Kantstrasse in Berlin, the second Georg-Schwarz-Strasse in Leipzig and now, their third issue, is devoted to Bernard, here in Montreal.

Flaneur isn’t a travel guide, it’s a visual and literary representation of the fragments that make up a single street. When all those fragments come together, you get to see the correlation between all of these unique pieces that make up the whole street.

I spoke to Flaneur’s founder Ricarda Messner last week about the publication, their transatlantic move and the very familiar territory of making a magazine work against the odds.

Kayla Marie Hillier: How did Flaneur come to be?
Ricarda Messner: I finished my studies in 2011 in Berlin — I’m born and raised there. And I always went back and forth between Berlin and New York. I already had my visa for N.Y. and I planned on staying there for a year but I didn’t, I came back after five months to Berlin. I was disorientated and I didn’t know what to do and there was this phase where I started watching a lot of movies and walking down streets on my own a lot. Then this concept, the idea of focusing on one street per issue for a magazine, started.

And there’s luck involved. I was introduced to the right people. I met Grashina [Gabelmann] at first and she knew Fabian [Saul] and we kind of started talking about it together and then it was very clear that the two of them were going to be the editors and they came up with a more concrete framework for the magazine around this idea. Then we were introduced to the designers Michelle [Phillips] and Johannes [Conrad] in January of 2013. We already had the first issue done and we started working from scratch.

KMH: For that first issue, did you get any financial support or was it pretty DIY?
RM: I didn’t have a clue about what it takes to do a magazine in terms of publishing — but I just said, “Okay, I’m going to do it somehow.” My friends were always saying, “You don’t even know what you’re doing,” which in the beginning was true — but somehow it worked. The first issue we printed 1,000 copies and I was able to finance it with advertising. I just really believed in it and I think that made other people believe in it. Thank God it worked out. We’ve received a great response in the press and from the arts and culture world. You talk to other magazine makers and you’re just a loving family, you exchange and in a way, it’s always the same kind of story — somehow you go to print.

With this project, there’s no entrepreneurial drive behind it. It was really a passion project and a personal project. Now as time goes by I have to start getting to know more of the business side and there’s accounting — especially around the end of last year, I was more occupied with the stuff that I didn’t want to do. It’s always that way when things slowly start turning into a business. I didn’t do it to write down numbers in Excel, but it’s part of it and you have to do it — especially to keep this team going. But for this project I’m more than happy to do those more unpleasant jobs.

KMH: Did you always want to do the magazine in English?
RM: It was pretty clear from the beginning: English is the universal language. It doesn’t matter if you don’t know this street in Montreal, or you’ve never been to Montreal. If you’re in Tokyo you can also read the content and relate to it in a way. If you live on the street, you might have a greater relationship to the issue and you might have a different purpose for why you bought it. But since the last issue, there’s always a booklet at the end where we have all the text translated into the language of the particular city. So for this issue that will also be in French. It makes sense here.

KMH: How did you find out about Bernard?
RM: This whole Montreal thing started last year after the first issue got published. Manfred, the director from the Goethe Institut, got in touch with me when he was in town in Berlin and he tried to get a copy but we were already sold out. So he called me on the phone and said, “Hello, can we meet?” and then we met and we got along really well. And he proposed that we go to Montreal. It was kind of surreal back in the day. But it all happened really quickly.

I was in America in October last year, so I flew over for three days to Montreal. I went to the city bikes [Bixi], put on my helmet and I drove around for eight hours without ever having been to Canada, without any kind of research beforehand, and just drove based on my intuition. I remember I drove down Bernard and it was such a powerful street because after Parc it changes completely. It was just my gut telling me it was the right street. Then I came back to Berlin and we started doing the research. We couldn’t be happier right now.

KMH: Where are you going to go next?
RM: We have to always start planning ahead, as we announce the next city in this issue. I think we might end up in Italy. Definitely back in Europe. ■

Flaneur’s Bernard issue will hit newsstands in June.They’ll be in town until the end of April.