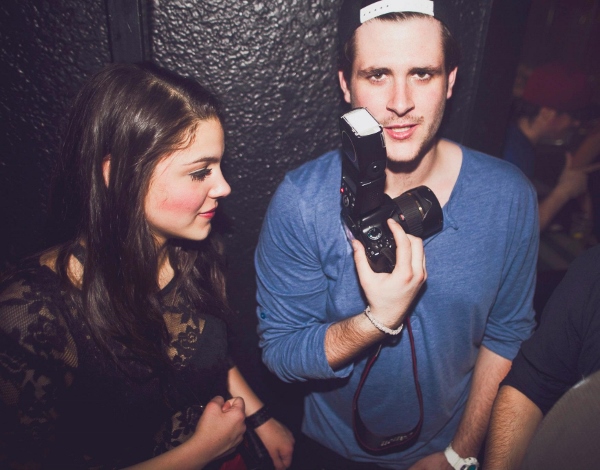 Has Jamie Coveny shot you yet? If you’re a patron of Montreal’s best parties, he probably has, and chances are you’d remember him.

“I’m not the typical photographer who stays in the shadows. I like to get into the party, drink with the people, dance with the people and take picture of them having fun. When I get more personal, I tend to get better pictures and a better response on their part. If you join the party and make friends, that’s the way to do it.”

Coveny’s approach to the local party scene evolved quickly since he launched Live Montreal Events, a listings site with a personal blog and gallery page attached. He realized that documenting events was his passion, and began shooting for his SnapShots micro-site, covering ground from Piknic Electronik to Velvet to uptown lofts.

“The illegal afterhours parties are a rush,” he says. “It’s always a challenge not to get shut down, and feeling like an outlaw gives it an edge.”

The next step up in the party scene was organizing his own events, something Coveny’s been doing monthly at Blue Dog, the St-Laurent Blvd. club celebrating its fifth anniversary with a SnapShots party (his eighth) tonight.

For the moment, Coveny’s party galleries appear on the SnapShots Facebook page, with some shots shared on Instagram to let followers know where he’s at while the parties are in progress. Soon he’ll launch a separate website where all this material will live. Whether it’s merely ephemeral fun or a place to preserve images of our city’s party scene for posterity — that’s in the eye of the beholder.

“I think of it as just documenting life in Montreal, especially the low-key, underground scenes where people really go wild.” ■