The exhibition Nick Cave: Stranger Than Kindness opened to the public in Montreal on April 8. A media tour took place on April 5.

Funkadelic’s Maggot Brain vinyl rests on top of a dusty vintage piano. Next to it, a framed print of Louis Wain’s psychedelic cats, adjacent from a gold bust of a man on a galloping horse. Above the piano, prints of old pin-ups, Muhammad Ali throwing a punch, a sacred image of Jesus Christ. Beside the piano, pillars of books, ranging from The History of Modern Art, Crime and Punishment, Lolita, to The Life and Times of Bob Dylan. Above them hangs an image of a bloody, shot-up gangster.

The desk in front is also piled with books, notebooks, and a lonely typewriter. On the left a white door is emblazoned with the phrase “I MARRIED MY WIFE ON THE DAY OF THE ECLIPSE.” Suddenly, a man with jet black hair in a grey pinstripe suit steps out of the door and sits down at the desk. He looks like a stylish banker crossed with a 1930s crime kingpin. He has a stern, aloof look.

He is the Australian singer-songwriter, author, screenwriter, etc., Nick Cave and we are in his creative domain.

“What are you all doing in my office?” Cave asks with a small smile.

This was the scene during the media opening of Stranger Than Kindness: The Nick Cave Exhibition, an in-depth look into the mysterious and creative genius of one the world’s most mysterious rock stars. A few days before, Nick Cave and his dear friend Warren Ellis performed two wildy cathartic sets of songs from their illustrious careers at the Place des Arts.

“That was our last show of the tour here in Montreal so please excuse me if I seem a bit distracted or exhausted. It’s just because I am.”

Cave sat at his desk for 50 minutes, answering a number of questions from a room full of eager journalists. For a man who has made a career from creating some of the most wonderfully weird/dark lyrics and sounds of the last few decades in music — i.e murder ballads, gothic folk stories, on top of being deemed “the most violent live band in the world” during his tenure with the Birthday Party — Cave was unbelievable calm and jovial, cracking jokes at his own expense.

Every time he was asked a question, he pondered his response quietly and answered with a polished, thought out answer. A man of his status could have easily phoned it in, but Cave didn’t. He was genuine and sincere, talking about periods of his rock star life in vivid detail.

“This exhibition, for me, is quite strange to walk through because I think it shows very clearly the life of a very self-absorbed, creative person. It’s a series of violent ruptures in my life. And this particular room is like the end of something.”

Stranger Than Kindness debuted in Copenhagen’s Royal Danish Library in 2020. Cave was approached by exhibition designer Christina Back and admits that at first, he was reluctant to showcase his whole life in a gallery setting. But Christina assured Cave that the exhibit would be more than a classic museum gallery. She wanted to get at the very essence of the artist and document his trajectory with a series of artifacts and passion. Cave eventually jumped on board.

“This just seemed like it was going to be a bigger thing,” Cave said. “I think that Leonard Cohen had a similar first response when he was asked for a gallery and I think that’s because our stories to us are just so boring — and that they’ve been told so many times before. You pick up a magazine, and you read something about yourself, and they tell the same story, and the story becomes exhausting, and it sort of wears you out. This is different.

A huge percent of the artifacts and memorabilia are actually donated by Cave himself as well as his late mother Dawn.

“Everything was taken out of my house, basically,” Cave says. “I was invaded by Vikings. A group of Vikings came to my house and just took everything away, emptied my drawers, took my books, took my paintings off the walls, took the carpets and put them in here.”

The exhibition is also constantly growing, as Cave adds different pieces of his life every time he steps foot in the office gallery room. He points to a quick letter for Tom Waits that he got a few weeks ago on tour.

There are six rooms in the Stranger Than Kindness exhibit, each showing a particular point of Cave’s life. The first room is near pitch black, and on the walls hang a number of framed photos, correspondences from Cave’s time in boarding school, to one of the concerts that changed his way of making music: the Australian punk rock band the Saints.

The next room is laid out like a circus tent with projected red and yellow spirals, documenting Cave’s time with the Boys Next Door, who eventually became the Birthday Party. The room is vast with rectangular boxes scattered throughout, each housing an old Birthday Party concert poster, song lyrics, Cave’s wicked drawings, a sign written in Cave’s crusted blood and paintings from his then muse, Anita Lane. Lane is also the author of the song “Stranger Than Kindness,” where the exhibit takes its name from.

The next room is dedicated to his Berlin era in the 1980s. It was here where he became obsessed with religious artifacts for their artistic value, and penned his first novel And the Ass Saw the Angel. The room is painted white in counter to the Birthday Party room and recreates Cave’s bunkbed, where the classic black and white photo of him looking manic and hardworking was taken.

You can see how much dedication was put into this exhibit through the very minute details. Anyone who has read And the Ass Saw the Angel (or even just the synopsis) knows that the main character finds a box of hair that follows him throughout the book. This weird detail is actually derived from truth, as Cave bought a box of hair in Berlin at a flea market. Those same locks of hair are nailed to the wall in the office room.

“I found them in a little chocolate box, there were three of them. And they were the same length, and sewn up at the top,” Cave says. “So some woman or three women, I could never quite work it out, had all had their hair chopped off at the same time. And that sparked endless ideas about what actually happened to these women, so they’re very much featured in the book. It’s amazing to have held onto these things. My wife actually just gave me a little drawstring bag with her hair in it for me to take on tour. I don’t know exactly what that means or what she expected me to do with it. But anyway, it’s sitting there in my suitcase.”

Next we have the Bad Seeds room, which is lined with recorded video interviews of the rotating cast of the band, talking about the constantly changing lineup and the woes and joys of working together. This is a must for any Nick Cave, Warren Ellis or Bad Seeds fan.

Soon after is the office room, but before we enter, there is a walled hallway of hundreds of books and a painting of a big Nick Cave holding a small Nick Cave. It’s wonderfully bizarre. You could spend hours in the office room as songs from the Grinderman LP and the Birthday Party’s Junkyard play in the background, sifting through the various books, paintings, caricatures, illustrations. A few vinyls are also in a corner, including Leonard Cohen’s Songs of Love and Hate, the first record that had a profound meaning for Nick Cave.

His older childhood friend, Olga, once took him to a darkened room and played the record for him when he was around 14.

“She said ‘Listen to this.’ And she put on Songs of Love and Hate. I was just a weird kid growing up in an Australian country town feeling like I didn’t really fit in, feeling like I didn’t really relate to the same things that people relate to and I just heard, ‘Avalanche,’ the first song that comes out of Leonard Cohen’s voice. And this was just a seismic change for me. Suddenly, I felt that feeling of being understood by somebody. And this voice became like a voice of a friend that sort of followed me around for the rest of my career really.”

The final room is actually two. The first being a wedding photo of Cave and his wife Susie Bick. The next one is full of more artifacts, some being a bust of Elvis Presley, a piece of gum — Nina Simone’s to be exact (in part due to Warren Ellis’s book Nina Simone’s Gum), also an email from Leonard Cohen saying “I’m With You Brother,” sent after Cave’s son, Arthur, tragically passed.

Stranger Than Kindness is not a snapshot into a famous person’s life, but a detailed collage. A collage that gets into the very being of who Nick Cave is, where he comes from, and what kind of person he is. You’ll feel as if he’s a distant friend after stepping through it, whether you were aware of his work or not. It’s profound. ■

The exhibition Nick Cave: Stranger Than Kindness is on at the Galerie de la Maison du Festival (305 Ste-Catherine W.) in Montreal until Aug. 7. For more information and to buy tickets ($25.99–$29.99), please click here. 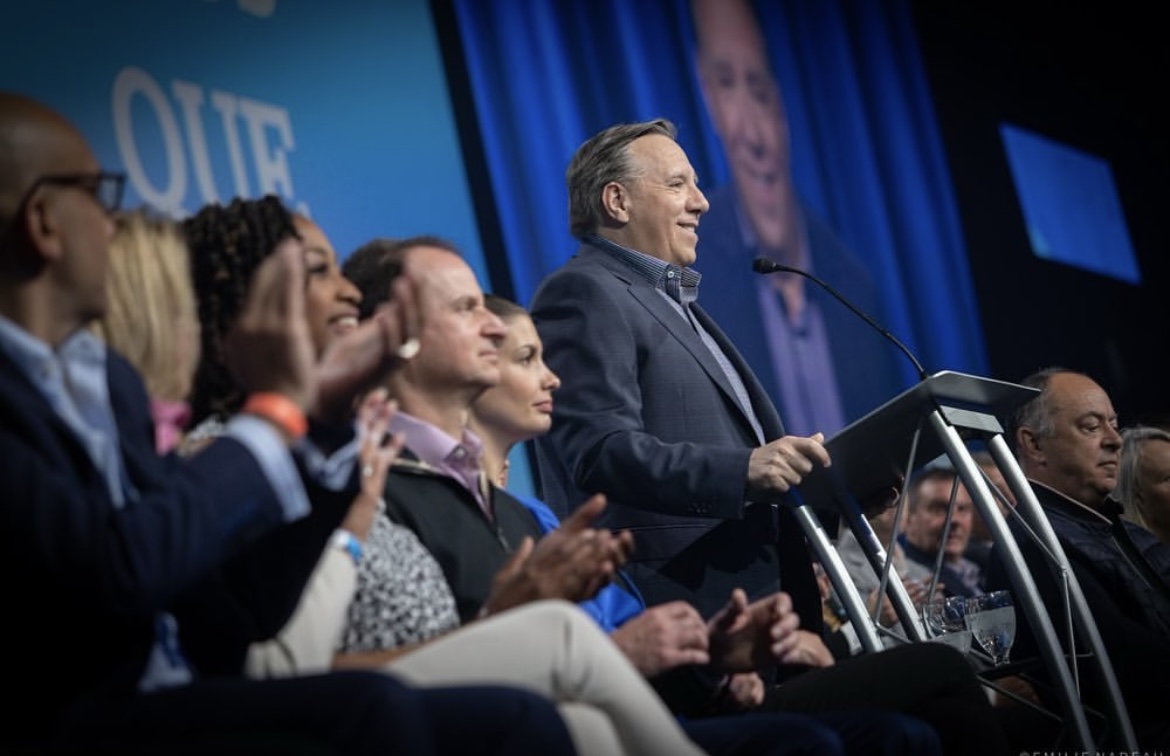 The Conservative Party of Quebec has moved into second place with 19% support, slightly above the Liberal Party. 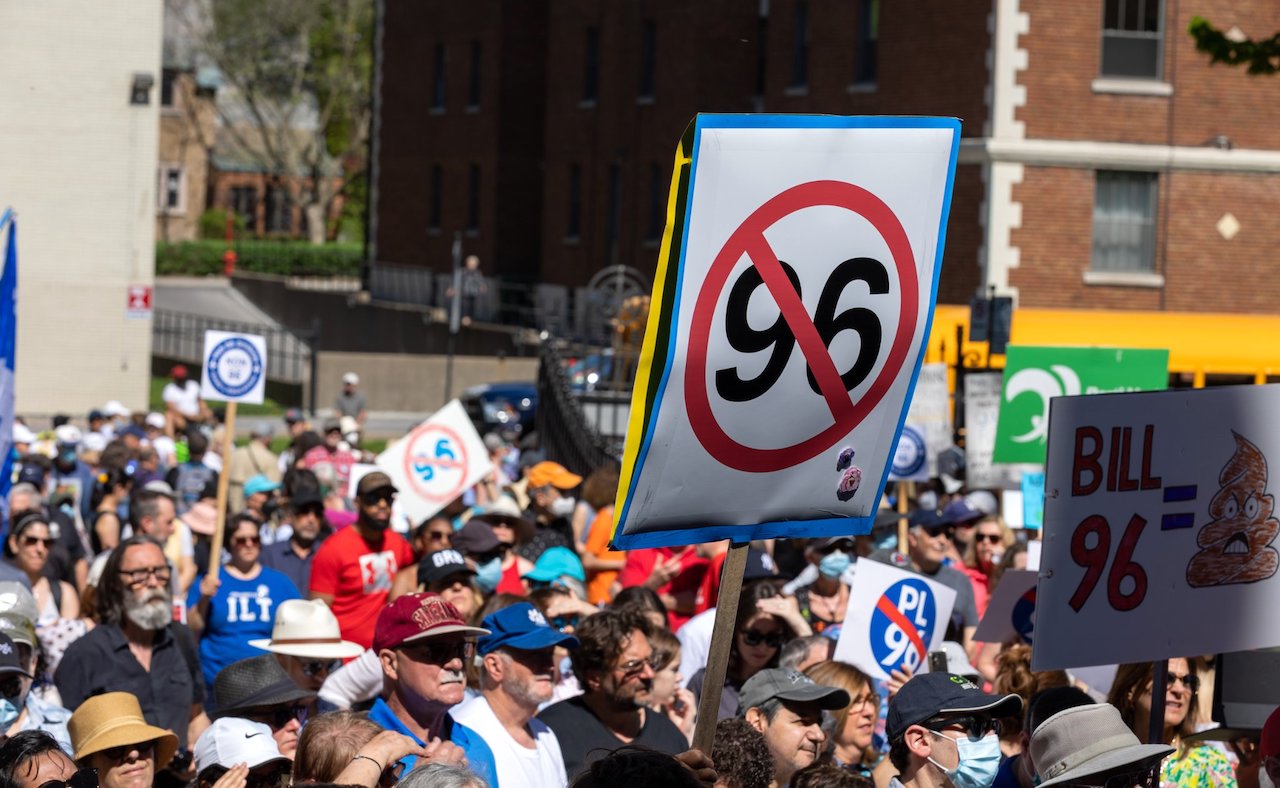 Bill 96: A law supported by 6% of anglophones and 71% of francophones in the province.