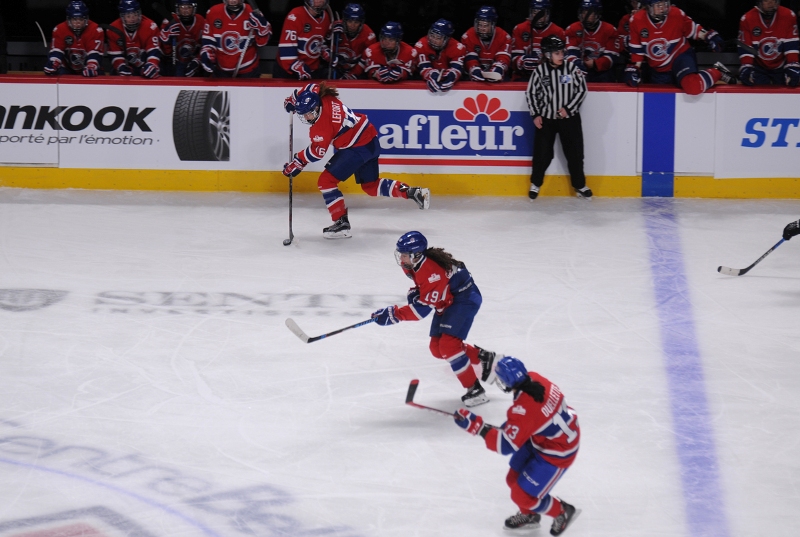 Les Canadiennes at the Bell Centre. Photo by Cindy Lopez

I’ve been a fan of Montreal hockey for a long time. I’m also a believer in the women’s game. Every time Canada plays the U.S. in an Olympic gold medal final, it’s the best hockey you’ll ever see. I feel like that every time I go to a Canadiennes game. The fact that these great players like Marie-Philip Poulin, Hillary Knight, Natalie Spooner and many more from the Olympic teams are playing along with other professional women’s hockey players at a local arena is amazing. So was the fact that there was a league to give opportunities for women to go further in their sport. Now there is one less opportunity for women’s hockey, for the moment.

The CWHL (Canadian Women’s Hockey League) announced this past Sunday that they will cease operations as of May 1. The announcement happened nearly a week after the most widely viewed Clarkson Cup final ever. In Canada and the United States, nearly 175,000 people watched the broadcast of Canadiennes/Calgary Inferno game. It seemed like a good sign that professional women’s hockey was getting such attention. It’s now getting a new kind of attention as one league folds and, a couple of days later, another women’s league (the National Women’s Hockey League) announced its intention to expand to two cities in Canada — Montreal being one of them.

That’s a lot to absorb in a few days. My question now is what happens next for professional women’s hockey in Montreal and in general?

I’ve written about, photographed and attended Canadiennes games for the last couple of  years. The games have always been exciting, not to mention affordable. I’ve made a habit of encouraging people to go check out their games. Post-game, the players are super accessible to fans (mainly young girls) to sign autographs, and it’s moving to see the optimism on the faces of little girls in Marie-Philip Poulin jerseys — the hope that being a female professional hockey player could be something to strive for.

My women’s hockey highlight to this day was when les Canadiennes played a regular season game at the Bell Centre. It had a lot of historical significance on many levels — for the league and for the sport. The majority in attendance were girls and women from other leagues watching professional women’s hockey in a major hockey market.

I was thrown off guard by the announcement because I actually thought the league was doing well. Keep in mind, I’m looking at this from a fan’s perspective, so all of the information I’ve been reading these last few days has been new to me. I never thought there was an issue with growing the sport, but it turns out their business model was the issue. Players, management, staff members knew nothing of this until this past Sunday via the CWHL press release.

I was aware of the other women’s league, the NWHL, which started a few years ago. Somehow their business model allowed them to pay their players from the start, but they, too, had their share of financial issues. (The CWHL only started paying their players two seasons ago, and salaries range from $2,000 to $10,000 per player — per season!)

What happens behind the scenes in professional women’s hockey in North America is fairly complex, but we all knew that having two women’s leagues made no sense. They may have had rivalling business approaches, but the intent of growing the sport was the same — there have been talks of merging down the road. We’re now down to one league, but is it the right league and the right direction for women’s hockey in order to move forward? I don’t think CWHL players will necessarily go the NWHL route. The remaining former CWHL teams (including les Canadiennes) will figure out whether to continue without a league or look at alternate options.

Why the NHL doesn’t get involved full time in women’s hockey is something that has come up a few times, but that’s an even more complicated issue. Following their name change from the Montreal Stars, les Canadiennes developped a partnership with les Canadiens that brought great advantages — the Canadiens offered training facilities and resourcess that have helped greatly to market the team and the sport. All the women had to do was focus on their game.

It’s been a frustrating week for the fans, but whatever happens next, the hope is that it’ll be a healthy move for the sport. There are more girls and women playing organized hockey than ever before, but the opportunity to play at the next level is out of reach for the time being.

But while the future of professional women’s hockey is on hold, the World Women’s Hockey Championships are underway, with players from both leagues competing. Yes, somehow women’s hockey is still business as usual despite what has unfolded. Women’s hockey has always found a way to survive.

That’s true in this city in particular. Montreal’s history with women’s hockey dates back to the original Canadiennes of the 1930s. There have been other women’s leagues as well. Whatever the outcome of the current league shuffle, there will still be women’s hockey in Montreal. ■