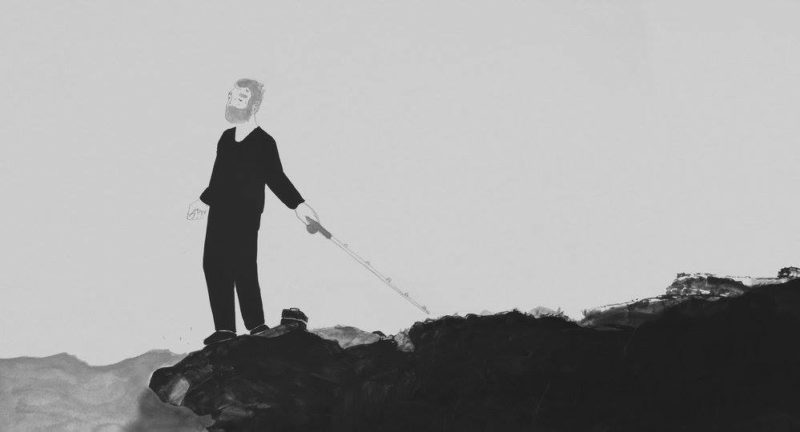 The year is 1995; the referendum to decide whether Quebec gets its independence looms. Joseph (voiced by Robert Lalonde) is a former writer and intellectual who has slowly but surely turned into a drunk on a downward spiral. Estranged from his ex-wife Emma (voiced by Johanne-Marie Tremblay) and his grown son Ulysse (voiced by Théodore Pellerin), he lives a fairly aimless and angry life until he accepts an offer from an old friend (voiced by Gildor Roy) to spend some time in an unused cottage on the oceanside in Gaspésie. Once there, Joseph begins to reminisce about happier times with his wife and son, and tries to use the opportunity to reconnect — all the while watching as Quebec’s future hangs in the balance.

“I wanted to set it on the edge of the ocean because it represents both an edge and a promise,” says director Félix Dufour-Laperrière. “It represents both the hope and the constraints of the characters. It’s a powerful image, too — the horizon. And I just like animating waves!”

Ville Neuve took four years and some 80,000 drawings to make, a fact that I knew going in but one that still seemed rather impressive given the film’s relatively compact end credits.

“This kind of arthouse animation movie has five to ten times more budget when they’re made in Europe,” says Dufour-Laperrière. “It was a choice that we made for Ville Neuve — we financed it in the defunct independent sector, which means $1.5-million dollars or less. That gave us a bigger latitude and gave the screenplay a better chance to be financed; it’s harder to get it financed in script form because people are less used to it. I took a year and a half of pre-production, alone, in order to draw all the key drawings, the graphic code and the iconography of the film as well as a part of the backgrounds. Following that, I had a team that wavered between 15 and 30 people working on the film over the course of two years — in some periods more, in some periods less. And I finished it up and cleaned up alone over the last six months.”

In a case like Ville Neuve where the drawings have a rough and tactile quality, Dufour-Laperrière’s approach to the pre-production was slightly different from the norm, which usually has the director and/or main artist create a sort of hardline “bible” of every look in the film.

“I did two things differently, in fact,” he explains. “Usually we’d make a model sheet, where the characters are seen from every possible angle, every possible stance and every possible outfit. That forces the drawing style to become very codified. I didn’t want to do that. What I did was make key drawings for every shot in the film, which is probably why it took a year and a half in the end. And you see it in the final product — the characters’ faces aren’t always exactly the same. It’s not right down the middle. I left a lot of freedom to the drawings. I’ll use the most obvious example: Mickey Mouse. He’s just a bunch of circles: his head’s a circle, his ears are circles, his nose is a circle, his stomach is a circle. Anyone who figures out that key can draw him. In this case, I wanted something more free. Each character was animated by the same animator — each was assigned a character, and so they each brought something to it. By the end, the animator who was assigned Emma was better at drawing her than I was!”

Because the images in Ville Neuve are so particular — Laperrière-Dufour keeps the crumpling of the paper in some aspects, and some scenes are very minimally drawn with essentially no background — the fact that its soundscape is a narrative one creates a particular effect.

“In animation, speech is often very instrumentalized,” he explains. “It’s almost percussive. We tend to believe that the voices are coming out of animated characters’ mouths because they bounce, they run, they’re surprised, they’re hiding. Those films are always in motion — in the midst of sound and fury, the voices really do seem like they’re coming out of a rabbit. In this case, I was completely embracing the artificiality of the drawing. The sound isn’t coming out of a piece of paper. We drew it onto actual sheets of paper with a certain amount of pared-down visuals, with a certain amount of minimalism. I like the effect that it gives when you lean back in your seat and go, ‘Oh, right, these are moving pictures!’ Sometimes it adheres to a depiction of reality that’s continuous enough for us to think of it as reality, but with some remove, you can also really take in the artifice of it all.”

Parts of Ville Neuve are therefore extremely stylized. In some instances, all we have on-screen is the silhouette of two characters and shading to suggest changes in light. Yet the film remains a mainly narrative one, one that remains very much grounded in its characters and their journey even if its visuals can dip into abstraction.

“Sound can do a lot for that,” says Dufour-Laperrière. “And negative space can suggest a lot. But it’s also got a lot to do with graphic choices — isolated elements are necessarily clearer. We kept a lot of the ondulation from the paper as well, because I absolutely wanted it to remain clear that they were drawings.”

The organic, manipulated look of the film was a decision from the beginning, but working in this medium is obviously going to lead to some unpredictable results.

“I keep the mistakes, but sometimes I mask them or dial them down,” he says. “But we knew that because we were using gouache on paper, it would ripple or modify the paper beyond what we could really control. We were ready to accept it from the beginning. But I still tempered it from time to time.” ■