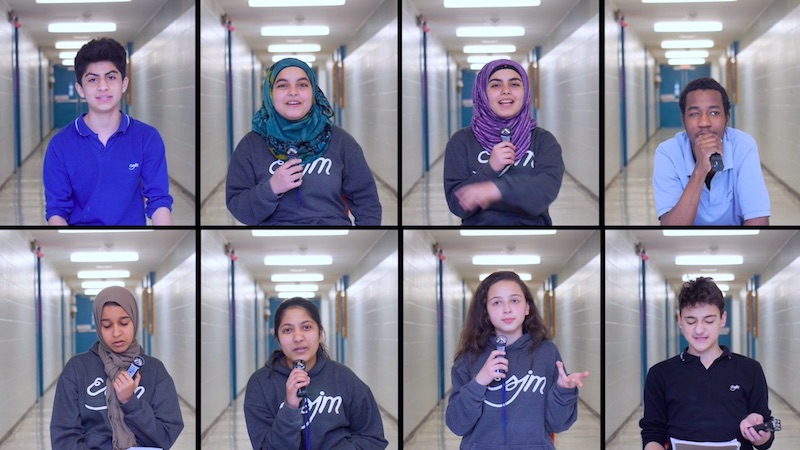 I spoke with video artist Veronica Mockler this week about her work Les Interprètes, a collaboration with the classe d’accueil (the welcome class) at the Plateau’s École secondaire Jeanne-Mance. The class was comprised of 16 teens newly arrived to Canada, all of whom spoke to Mockler over the course of a whirlwind six Wednesdays this past year. The resulting footage and interviews (and some confessions, but with the mic unplugged) form this video performance.

Mockler and I discussed working with teens and her ongoing collaborative art practice, as well as her thoughts on the delicate juggling of aesthetic and ethical concerns in participatory art more broadly.

Nora Rosenthal: Can you tell me about the process that started Les Interprètes?

Veronica Mockler: It was a residency that I set up with this non-profit organization Turbine. What Turbine does is they try to bring artists into different communities. Their mandate is to create a bridge between artists who are cooped up in their studios and who don’t open themselves to the world and to try to make their practice discovered by [these] different communities.

For Les Interprètes [Turbine] said, “We have this possibility for funding the set-up — would you do a residency?” And what I tried to do is have [these teens] talk, express themselves through different frameworks. I used a lot of oral history, I used a lot of stuff that’s more derived from conceptual art and I basically made them chat about anything they wanted to chat about.

NR: What was your role as mediator?

VM: I didn’t want to impose. The role I took on was more their pal. We did interventions on Instagram, they showed me the [music videos] they listen to. I really let them guide the subject matter.

VM: What I realized is that they started getting it at the very end. By the fourth week, they were really getting what we were doing, they were starting to come up with ideas themselves of how they could share their story or subvert its reception or how they would express it. I really wished I could have had double the time I had.

NR: In terms of participatory art or community art more generally, how do you judge the work, as an artist in this milieu? Are you prioritizing the aesthetic, the ethics, the storytelling?

VM: Number one is the ethical concern for sure and it’s a really hard balance to remain ethical and still get an interesting story and make it look interesting, you know? But being an artist who’s always working with people for whom it’s their first time thinking about their story, their lives, their ideas in artistic ways – I can’t not be ethical. This has to be my priority.

NR: When the aesthetic or the conceptual is subsumed to the ethical in these contexts – in those instances are we talking about something at a liminal boundary between art and sociology? Are we misconceiving of certain projects as art if the ultimate goal is ethical? Not to say that that’s a bad thing but is it perhaps a different categorization altogether?

VM: Yeah because we’re kind of observing and evaluating these projects in the same way we’re evaluating, for example, a painting. It’s so not the same thing. But we’re still asking, “Is the project efficient? Is it beautiful?”

NR: I meant that I don’t think we’re judging this kind of work like a painting at all. More like social work, often.

VM: But at the end of the day, you do come in the gallery and look at the results, right? And when you look at those results, if they’re not flawless or aesthetically pleasing then some people do leave going, “That was shit,” you know?

NR: Then why this tendency in participatory art more broadly…why doesn’t it look weirder? Why is this documentary aesthetic seemingly de rigueur?

NR: I was reading about Madeleine Sackler’s film O.G., which uses real inmates in a real prison but in a fictional narrative, and what struck me most reading about it was that this process gave everyone such meaning and purpose and intensity that there was a tremendous sadness when the crew left, much more so than the usual sadness accompanying the end of a shoot. I wondered if with these teens there’s some parallel where you’re coming in all ears and you’re paying attention and taking them seriously where what comes afterwards is difficult?

VM: We refer to this in the practise as the “hug and run.” You don’t want to hug and then run.  It’s also normal, you don’t keep contact with everyone you’ve ever known. But, the big thing about hug and run is at least ensuring that you’re available if they reach out afterwards.

I think the reason why I do this practise is that, yes, the ethical considerations will never go away. I love asking myself these questions. In the end you’re introducing a time and space for artistic reflection to someone who maybe doesn’t take that time or who has never taken that time in their lives. And it’s not deep — I wasn’t reading Deleuze with my kids. We were dancing on Instagram or doing weird stuff [laughs]. You allow people a context in which they can be kinda funky. Art is in itself weird to anyone who doesn’t do it and they allow themselves to be weird a bit. ■