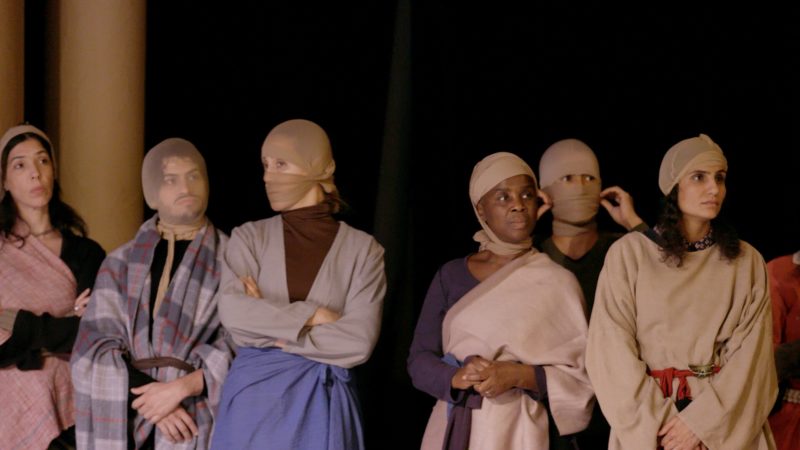 Last summer, Robert Lepage’s new production Slav, “A theatrical odyssey based on slave songs,” premiered at the Montreal Jazz Festival amidst controversy. The play starred a white performer, Betty Bonifassi, and the primarily white cast was seen picking cotton as they sang about black slavery. The question of cultural appropriation was hotly debated across the province and the show was cancelled. Lepage decried the cancellation saying it was a “direct blow to artistic freedom.”

While many backed Robert Lepage’s freedom of expression and experience as an artist, just as many were frustrated by his public responses to the controversy. Lepage opened up talks with members of the black community in order to improve the show. In December 2018, he publicly apologized for the misguided approach to the first production of Slav. The show has since been reworked and was relaunched earlier in 2019 to little fanfare.

Caught in the crossfire was another Robert Lepage project, Kanata, a production intended to illustrate the meeting of Europeans with First Nations people in Canada. The rehearsal process was captured by documentary filmmaker Hélène Choquette, who had shot over a month’s worth of material before the summer controversy. Kanata was cancelled in July 2018 following the Slav controversy, as two co-producers backed out of the production. A version of the production was mounted in Paris this past December. That show directly invoked the controversy that cancelled Lepage’s performance.

Choquette’s Lepage au soleil only references the whirlwind of controversy in the bookends of the film. Instead, it goes to great lengths to portray an inclusive and collaborative project that bears little resemblance to the clumsy public image the production had amassed. Working with the famous Théâtre du Soleil troupe, a world-renowned avant-garde collective that has been active in the theatrical world since the mid-1960s, Lepage’s production was to feature 36 actors from 11 different countries. While they have no official mandate, they have become known for pushing the boundaries of theatre, focusing on updating classic texts for the contemporary era and blurring the line between performer and audience.

Very little of what would have been Kanata appears in the film as Choquette had always meant this to be a film about the process. Many of the questions surrounding cultural appropriation, authorial intent and the experience of the First Nations people of Canada are openly discussed. The film features footage of rehearsals but also talking-head interviews. Choquette, whose previous films have embraced a cinema verité style, adopts an inquisitive eye.

As a result, Lepage au Soleil: The origin of Kanata brings up more questions than it answers. The documentary does not equivalently demonstrate that Robert Lepage has done no wrong, but it certainly reveals that the question of the play’s use of cultural appropriation was largely misinterpreted and was far more nuanced than what many were led to believe. In a culture where we react first and ask questions later, Choquette’s film demonstrates that things were a bit more complex than they had been painted in the media and that a more thoughtful opportunity for discussion was missed.

I sat down with Hélène Choquette to discuss the film. 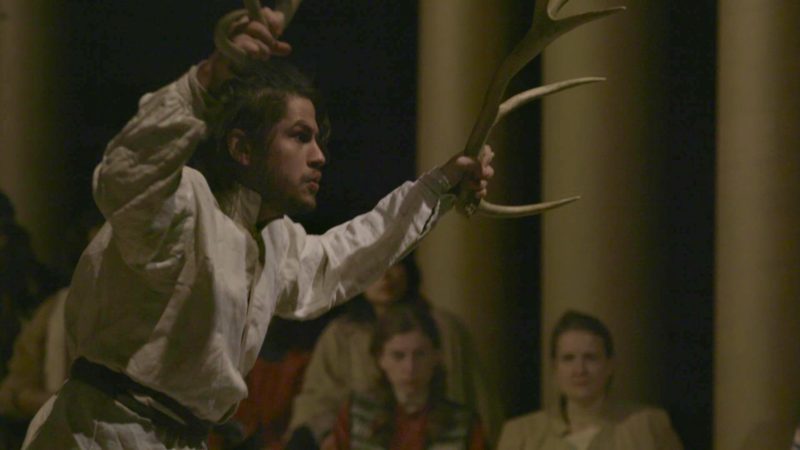 Justine Smith: What was it about the project that initially attracted you?

Hélène Choquette: First, it was a historic encounter between Ariane Mnouchkine and Robert Lepage. For the first time in history, Ariane Mnouchkine [who founded and has worked with the Théâtre du Soleil] lends her troupe to another stage manager. For over 50 years, Mnouchkine has been involved with the theatre — it is her home and it is in her blood. For the first time, she was not involved in the creation of the production. This was a big thing!

Secondly, it was the troupe itself. It is made up of refugees and different people from all over the world. I was intrigued by how they would receive the story of the First Nations people of Canada. The first part of shooting in the fall of 2016 was this trip to Western Canada and a bit in Quebec. For some of them, it was an eye-opener. Other actors had already been on reservations in Canada. They didn’t have this fantasy image of First Nations. Some actors were well aware of the situation — especially those from Brazil and Chile. They knew about indigenous people and how sensitive it was to talk about.

JS: How much of the film was finished before the summer of 2018 when the Slav controversy took place?

HC: Before the summer, we had about 46 days of shooting done and we had a first assembly cut. I was supposed to film one last block of rehearsals in November, which didn’t happen. I decided to stop shooting a few weeks after the controversy. What I’ve been documenting for two and a half years and what was going to be produced in Paris in December was not the Kanata that Robert had worked on.

If I had filmed the controversy and what unfolded, Robert could have been accused of justifying himself. In the making of the film, I had already asked him the questions raised by the controversy in a different context where he did not feel attacked and was not under any pressure to answer in a certain way. I thought it would be more productive to have a film that takes place before the controversy so it can be used to pursue a dialogue.

JS: You still include examples of the debate, especially towards the end of the film, which features quotes and context about the controversy surrounding Robert Lepage. Why include that in the film?

HC: The film is going to travel and is going to be seen places where they have no idea what the controversy was. So, I’ve chosen some things that have been said about Kanata. After spending an hour and a half seeing the [process behind] the creation — why were these questions asked and these statements made? I chose not to put the names of any of the people, I just want them to understand the kind of comments directed at the theatre troupe. I didn’t want to attack anyone, just give an impression.

They worked on it for two years and they receive a deluge of articles based on false assumptions about what they’d done and who they are. It’s about two minutes of a film that has a 94-minute running time. The film is not about the controversy and maybe there should be another film about that!

JS: Do you have your own opinions on the controversy?

HC: When I saw what happened with Slav, I was sure it would hit Kanata. I was already sad because it’s two very different productions and two very different contexts. The Théâtre du Soleil is a very unique troupe and they’ve been working on shows taking place in different countries and taking on different perspectives for a long time. They’ve always worked on these kinds of shows, depicting characters from cultures other than their own. It’s in the DNA of the Théâtre du Soleil to do this.

Kanata got caught inside of the Slav controversy. The first article published about Kanata was based on an outdated press release that was not relevant to the actual production. She also said that the troupe featured French actors, which is not true. For days following the scandal, people thought it was French actors doing the show. It completely misses that Robert Lepage’s inspiration was the multiculturalism of the Théâtre du Soleil and the fact that these actors come from all over the world. It was not only that, and we can still debate the cultural appropriation, but we cannot debate the diversity of the actors in the show.

Again, it was a piece of theatre. It was not a piece of legislation, it was not from the government. Robert Lepage wanted the freedom to do what he wanted. There will be other shows. The last line of the film, “The rest of the story will be written on stage,” is very important to me.

The concept of cultural appropriation is more welcome in Quebec than in the rest of Canada and in France it’s also something else, so the debate is only starting now. Kanata helped push that debate into the spotlight. It’s a debate that is only starting and it will be at the heart of all future art and theatre projects related to cultural appropriation.

JS: Is there something you hope people take away after watching your film?

HC: Robert saw the film and he said, “this respects what I wanted to do, this reflects my vision.” I hope people can watch it and realize that there was respect, there was seriousness and there was much more in it than just representing First Nations people. The show was much more complex. It became so big for something that no one had even seen. We can be against the concept but we didn’t see the show, so how come it became so big?

JS: Yes, but you can also see the other point of view, that it’s not just about Kanata, it’s about not having the same space as Robert Lepage to express their story.

HC: Yes, but Robert Lepage’s name is linked to success, to international visibility. So when they heard he was making Kanata, and go on tour everywhere in the world without us — I can understand that. But I can also understand Robert Lepage as an artist. His inspiration is this troupe and it’s with this troupe that he wants to talk about the loss of identity.

He never chose to be a symbol. His name invokes something bigger than who he is. As a person, he is very simple, tender and frank — and for two weeks this summer he became [publically seen as] a racist. He became a victim of his image and what it represents. As an artist, he had this very simple inspiration. The question becomes, does he have the freedom to express it? ■