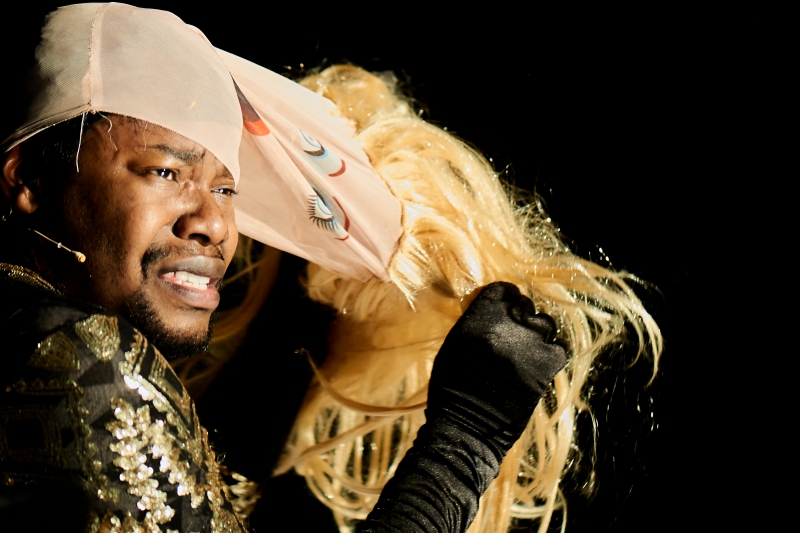 Jaamil Olawale Kosoko is one powerful performer. His performance of Séancers is both like a Reverend, and like Bob Fosse. There is a little of Rick James, of Prince, of inspirations he referred to in the Q&A that followed as “flamboyant amazing entities.” There is tragedy and mourning so totally shrouded in glitter and fun that you are still dazzled as you leave, smiling and yet full of a sinister knowledge made manifest to you in a way that feels far more pressing than when, for instance, you read the news.

We may know there is a tragic racial divide in our world, that our very world’s functioning is predicated upon that fault line, but sometimes it takes someone strange and entrancing performing their way through tragedies both personal and societal to make you really feel it in your gut.

Séancers is an interdisciplinary performance created by and starring Kosoko and featuring a “Guest Séancer” whenever it’s performed (in this case Dana Michel, who does a freeform interview from the audience during the first act). It’s one of five performances by Afro-descendent artists that makes up the three-week long series black.art.empowerment: I see, I speak, I am movement at Montréal, arts intercultural (MAI), curated by Rhodnie Désir.

Speaking to Désir before the show, she highlighted that she chose to emphasize conferences, panels and laboratories as an integral part of the series “so that we could have a conversation”, so that audiences and participants would be able make connections between conference and dance, between performance and laboratory.

The theme of Afro-futurism looms large in the series, and Séancers also references its counterpart, Afro-pessimism. Kosoko, when asked by marikiscrycrycry (aka Malik Nashad Sharpe, whose show $elfie$ is also part of black.art.empowerment) to talk about Afro-pessimism, he replied “We don’t have the world without black death…the world as we know it.” There’s the inescapable reality at the heart of this performance. And yet make no mistake, it is a performance abounding in joy.

Kosoko’s first entrance is spookily pacing the stage in a purple-brown velvet robe and matching elbow-length gloves, stepping up into the seats to pass out Hershey’s kisses while the audience examines print-outs left on their chairs informing them of the vast multitude of white men who have been acquitted of violent crimes against black people. The glittery set, the charm of the chocolate, all this warmly draws us in just as the content of the print-outs registers.

Throughout it felt as though Kosoko was reimagining what a church could be and inviting us into his vision. There were glimpses of profound loneliness and loss, of why people turn to a higher power, but also of something fantastical and very weird.

At one point Kosoko carries a larger-than-life prop skull, and with his dead father weighing heavily upon Séancers, this seeming nod to Hamlet felt both cheeky and profound. A balance of performative delight and a sobering exploration of blackness (and whiteness) characterised the entire show, from an incredible glitzy number with heels to a terrifying one in which Kosoko emerges from a tangled rubbery mass of deflated sex dolls, a rubber horse’s head and some kind of thick glittery tinsel to lip-synch the words of a chillingly potent speech by the activist and theologian Ruby Sales.

There seems to be a glistening critical theoretic backbone behind black.art.empowerment as a whole, and Séancers manages not only to rise up to its promise of theory and history in profound and often deeply saddening ways, but also to be completely enchanting.

Kosoko left out his books for us to look at after the show, which strikes me as both very generous and very practical: to show us his knowledge base and let us learn from him. To me, this is one very concrete way of building bonds between different groups of people. In that spirit, these are some of the books that Jaamil Olawale Kosoko drew our attention to in Séancers, followed by some texts curator Rhodnie Désir directed me to. After all, this series is all about discussion and community growth.

Zami: A New Spelling of My Name by Audrey Lourde

In the Wake: On Blackness and Being by Christina Sharpe