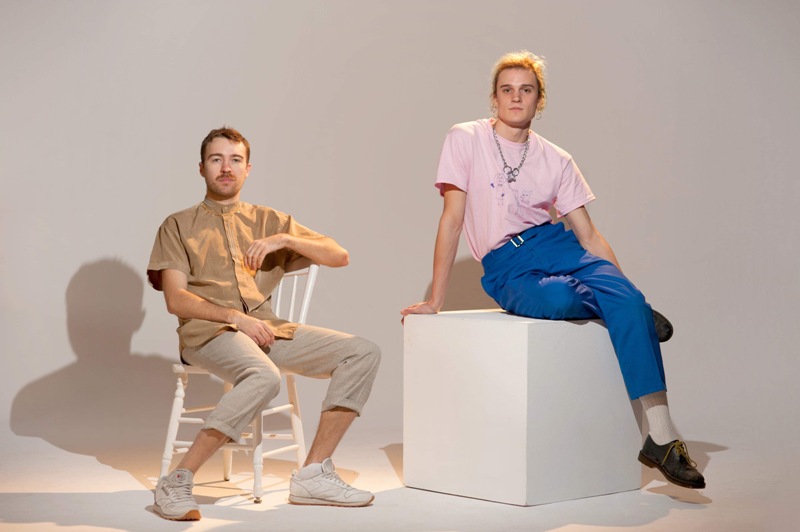 On a sunny Monday afternoon in late January, I sat down with Hugo Dufour and Terrance Richard, friends and roommates who run the artist residency Céline Bureau out of their home. They’re sharp as they come, easefully chatting about art institutions, community and how they’ve quelled some of their cynicism about arts spaces by creating a residency where critique and process are always at the foreground.

Céline Bureau emerged out of Dufour and Richard’s desire to bridge that post-art school isolation, that moment in an early arts practice where you want to reach out but don’t know to whom. With each of Céline’s calls, typically three times a year, they accept four artists across disciplines, ages and backgrounds to come and work side by side.

Nora Rosenthal: Do you want to tell me where the name Céline Bureau comes from?

Hugo Dufour: There are many reasons. We wanted to have something that was typically from Quebec but was also a pun in two languages, or evoked two different things in different languages. So, Céline of course will evoke Céline Dion but Céline in Quebec is a very common name — it evokes everybody’s ma tante, and Bureau means something both in French and English though with a different nuance which for us was funny.

We knew we wanted to have this campy serious thing, you know? We also felt that nothing was campier than a news anchor, or more campy/serious, than a news anchor. It’s a performative seriousness; like the fake accent that they all have and the tasteful yet outlandish power suits. So Céline Bureau is also an amalgam of two news anchors on Radio-Canada: Céline Galipeau and Stéphan Bureau.

We’re both from Quebec, and both from very different parts of Quebec. [Terrance is] an anglo Quebecer and I’m a franco Quebecer and [we wanted] this thing that was both local but resonates more broadly.

NR: So what was the process like getting started? How many nasty bureaucratic surprises were there as far as just getting this functioning and off the ground?

HD: To be honest not many because we kept it low key and that’s the goal, that’s the public of Céline. We don’t want to be intimidating. It was really in reaction to the pompousness of many even small art institutions. We do Céline Bureau to create new networks for people because it’s hard. You leave school and one third of the people leave and one third stop doing art and then the third that’s left might not have been the people you were hanging with at school, so there’s a big loneliness, a big drop and Céline is that step where we’re like, hey, there are other people who might be interesting to collaborate with outside of your bubble of language, practice, age, etc.

NR: Has Céline changed how you think of your own arts practice? Cause you’ve become these community facilitators.

HD: First of all it made me discover many nice artists. It really made me feel good [laughs]. It’s also let me get rid of many of the rules I had in my head like, ‘Oh I’m a photographer,’ ‘Oh, I’m an installation artist,’ ‘Oh, I’m making robots with knives that spin.’ When you’re an artist it’s so easy to paint yourself in a corner, like ‘That’s what I do’ — you’re forced to.

TR: Yeah you have to have a brand, kind of. Or it’s hard to be chaotic.

HD: And Céline just makes me want to collaborate. ‘Oh you write,’ ‘Oh you draw,’ ‘Oh you just talk’ — it’s freeing to be in contact with other artists.

TR: I think realizing that fulfillment came in that capacity was really fun. And we were less interested in the processed timeline of only dealing with finished work. Being present in that time when things are still malleable and changing was really interesting to both of us.

HD: And I feel like the cultural capital transfer when an artist shows work through a show with a curator is in a big part going to the curator and the space. But giving space to talking and debate, just bringing in outliers — that’s what I love. I love crits. I love critique. And that’s an art that’s being lost.

NR: Who out there is creating a space external to galleries where you’re really getting that critique?

HD: I really love — and of course we’re not doing the same thing, we’re two white people — but I really love what White Pube has done in the U.K. They’re a duo of art critics, two non-white women who just give coherent critique from their point of view. They go around and are vocal about art and it’s just this framework of–

HD: Yeah, realness. I think they’ve shaken the scene a bit in London, from what I’ve seen. They reveal just by their presence the whole white dudeness of all these institutions, or just by calling out the boringness of so many art shows. There’s a big omertà about critiquing institutions — we all do it but it’s never public. And that’s the most refreshing thing that they’ve done. It’s just–

NR: What continues to make Céline dear to you?

HD: We’ve mentioned community but it’s also about Montreal. It’s a huge hope to have more reasons for people to stay and make links here.

TR: I think we’re both much more validated personally on the social aspect — the humanity of it! [laughs]. This friend who did the residency and who’s now living with us, it’s really happy to talk about art or engage with it [with her].

HD: I mean of course there’s a power dynamic since we choose the people here but we try and have a relationship with the artists that are here where the power dynamic is limited. It’s an exchange. This thing came from a certain disillusion with the art world in my case and this project helps me find joy in it again. ■