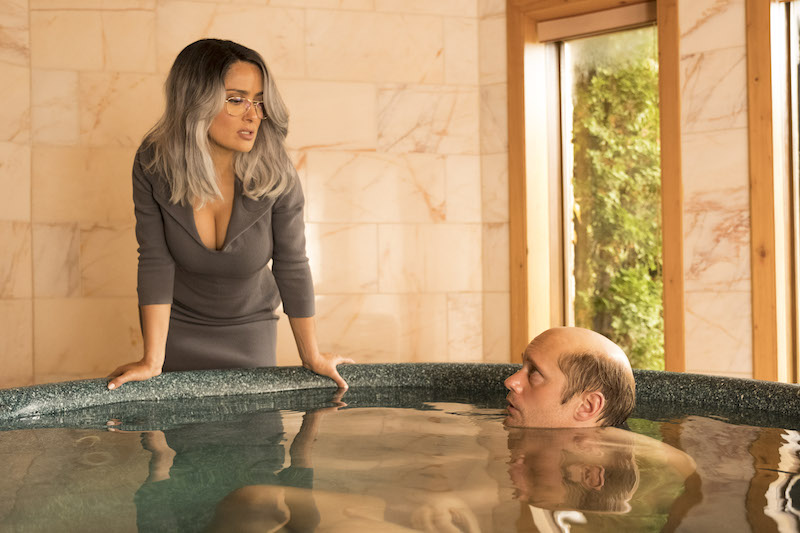 Salma Hayek and Alexander Skarsgard in The Hummingbird Project

The logline for Kim Nguyen’s The Hummingbird Project isn’t the sexiest: it’s about two cousins who race against time to implement a top-of-the-line fibre-optic line between New York and Kansas. There is, of course, a lot more to this film than that — but on paper, the link between high-speed fibre-optic cable and cinema isn’t that exciting. As this is Nguyen’s second film in a row (after last year’s Eye on Juliet) to focus on the ins and outs of modern technology, I had to ask: how does one go from learning about the very concept of high-speed fibre-optics (which, in this particular case, are used to obtain stock exchange info mere milliseconds before anyone else) to making a film about it — a film starring A-list movie stars, no less?

“My answer is pretty much exactly that,” says Nguyen. “The hardest thing these days is finding specific, precise and detailed things. In our world — in Quebec, in Canada — it’s incredibly hard to find specificity. There’s something incredibly standardized to architecture and to our lives. Speaking as a filmmaker, smartphones are totally lousy. There are no more big machines in our lives — no typewriters, no phones. So coming across something as specific as this fibre-optical wire, it’s like candy. I also thought it was important to talk about the financial world — the way it’s currently structured is one of humanity’s biggest problems. They use up so many resources that could be used for something else. They use up the best minds in the world! I didn’t quite know how to approach it until I learned of these people who stood in lakes of mud and dug holes with machines in order to gain an extra millisecond — that’s when I discovered that I could pretty easily take a human and throw him into that mud.” 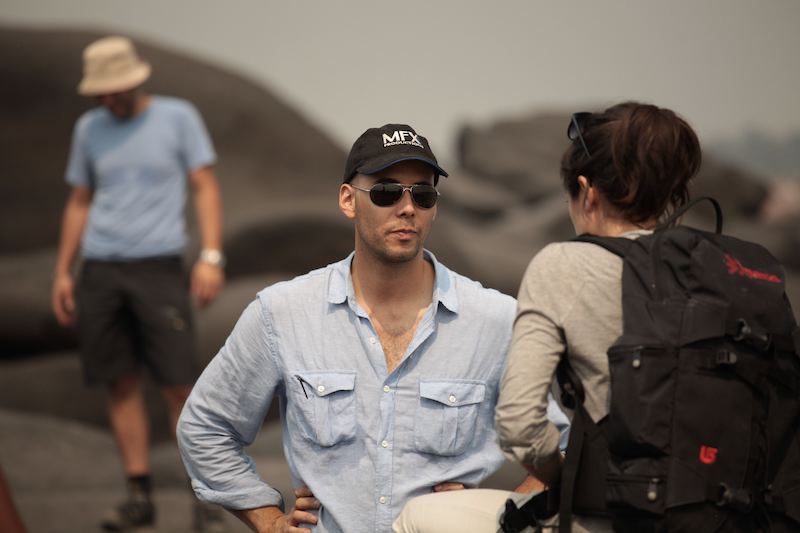 “I was speaking to an AD and I was saying that, basically, what you want to do when writing is to find a character, you find a conflict and you drag them through the mud for as long as you can,” he laughs. “You have to dunk their heads underwater, once in a while, until the end of the film. In this film, it was almost literal!”

In this case, there are two characters dragged through the mud: Russian-American cousins Vinnie (Jesse Eisenberg) and Anton (Alexander Skarsgård), both of whom start out the film working for tech billionaire Eva Torres (Salma Hayek). Vinnie has discovered that, with the computing brains hidden inside of Anton’s awkward, balding pate, they could find a way to lay enough optic wire between the New York Stock Exchange and a server in Kansas to get information ever-so-slightly before everyone else. In the world of High Frequency Trading, a millisecond or two is all you need. Securing funding from a billionaire (Frank Schorpion) and on-the-field expertise from contractor Mark Vega (Montreal’s own Michael Mando), the cousins set out to beat the unbeatable — except that time is so tight they haven’t quite cracked it yet, and Torres has much more at her disposal to stop them than they do to stop her. 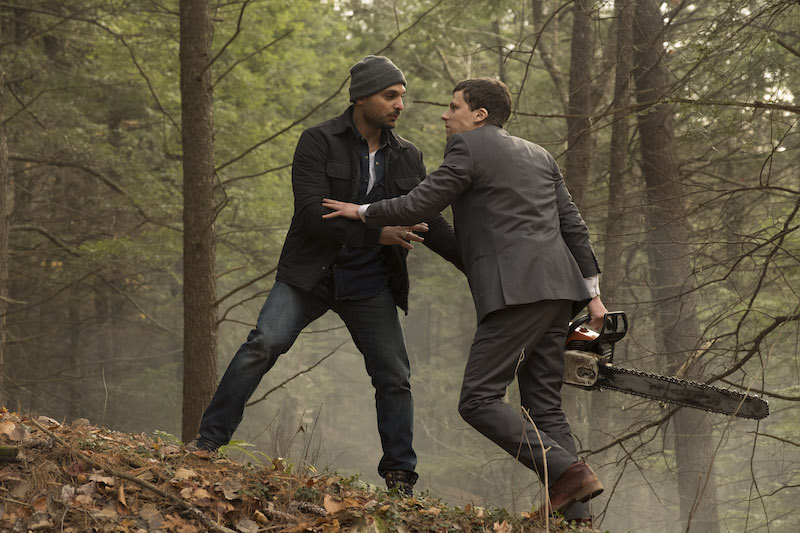 Michael Mando and Jesse Eisenberg in The Hummingbird Project

The Hummingbird Project is set in 2011, making it a very particular type of period piece. Like most films about technology these days, it has to be set in the very recent past because our predictions about the direction of technology have been way off the mark… and because the production schedule of a film almost certainly ensures that what is considered cutting edge in pre-production is completely outdated by release.

“Although it isn’t based on a true story, I wanted the facts to be true,” says Nguyen. “This topic is so insane that I didn’t want any of the film’s technology to be fictional. The technology depicted in the film really was invented in 2011.”

The idea that the film isn’t based on a true story has been the loudest talking point since its festival run. According to Nguyen, pretty much everyone went into it assuming it was a true story, even though there’s no indication of such.

“I think people are more faced with this sort of cognitive dissonance when it comes to the film,” he explains. “The overwhelming reaction that I get from people who see the film is, ‘Yes but why isn’t it a true story?’ (laughs) ‘Couldn’t it have been a true story?!’ But I think that’s because we did so much research and went into so much detail. We hired a real excavator and we dug real tunnels. We essentially lived out what happened in the film. I think that the whole insanity of that world and of these characters is compelling because it’s both credible and just out of this world. It is very strange that it isn’t a true story — even to me!” ■

The Hummingbird Project opens in theatres on Friday, March 22. Watch the trailer here: