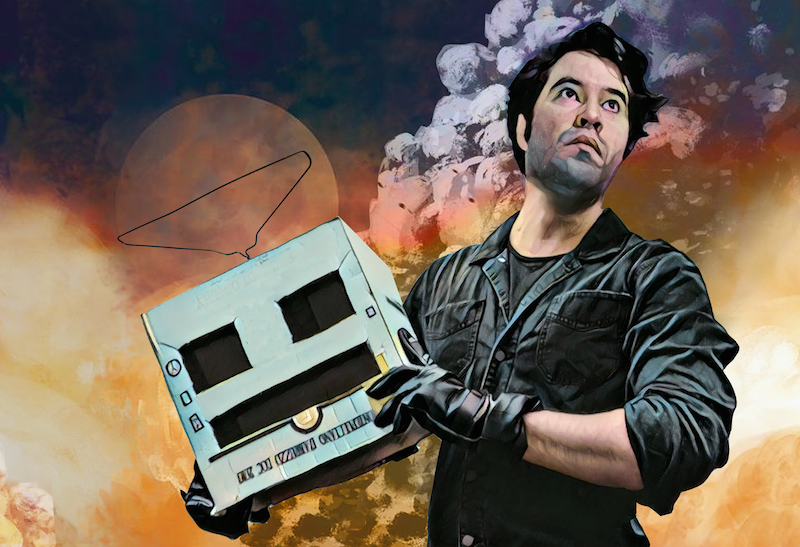 If you’re interested in seeing whether this description fits even in the slightest, Blair will be in back in town performing on Hypnosis, the Sketch Republic’s March 2019 offering. What he’s bringing has yet to be confirmed.

“To be perfectly frank, I’m not done tooling this [new show] yet,” he says. “This one deals a little bit more with the unnatural, with the supernatural. I’m going outside the regular rules of the world for this one, and not just in my traditional sense, where, like, a Dracula shows up.

“This one is a little more magic-realist than some of my previous things. To what end? I’m not sure yet.”

What is he sure of? First, that he loves performing Sketch Republic shows, and second, that he really, really likes what’s happening in Montreal’s scene.

“They’ve had me back a few times,” he says. “I find myself trying to make any excuse to get down there, because I like the comedy scene there so much. It’s really grown a ton in the last couple years even, so it’s really fun to go down and be a part of it a little bit.”

Hearing Blair and others say things like this is edifying. While Montreal is the home of the world’s biggest and best-known comedy festival in Just for Laughs, the city’s English-language comedy culture has, at times, suffered from a lack of identity.

Moreover, it’s always seemed as though the anglo talent in town knew that a move to Toronto, New York or Los Angeles was inevitable.

Blair, a multifaceted comic talent (writer, actor, comedian) and horse aficionado who lives and works in Toronto, is no stranger to how the industry works and how it pressures people to live in certain places — and not in others.

He’s also done enough (This Hour Has 22 Minutes, JFL42, Because News, People Watching, Comedy Bar’s Sunday Night Live) to know that what we have here isn’t what he does there, which is actually one of the reasons he likes making the trek to Montreal.

This is likely because no one interested in English-language comedy comes here to train and because the scene here isn’t necessarily about getting discovered as much as it is about putting in the work. It’s probably fair to say that the decidedly lower stakes in Montreal — as compared with Toronto, New York or Los Angeles, where one customarily goes to get discovered — have helped create and incubate a certain kind of creative freedom.

In 2017, Montreal Sketchfest director Erin Hall told The Gazette that “our sketchers are known for their freedom of expression [because] they [weren’t] brought up by schools like Second City in Chicago and Toronto or UCB Theatre in New York.” Hall said that while other cities’ performers were bound to a certain style, Montrealers were not, and as such, did not conform to a single interpretation of sketch — or comedy.

Blair generally agrees with this diagnosis.

“It’s an emerging scene and they’re doing really fun things,” he says. “I think it’s newer and things are kept a little bit more in-house. There isn’t that sense of ambition; we’re not all trying to immediately get picked up by Second City. We’re just there to do shows and have fun and blow each other’s minds and it’s really neat to see the things they come up with.”

As for Blair’s own ambitions as a writer and performer, he allows that while he hasn’t ruled out moving to one of the two American entertainment capitals, there’s a pragmatism that keeps him rooted in Toronto. At least for now.

“If I was going to go south, for me the ambition was always to go to New York, because of the kind of performance I do and the talk show kind of writing I do,” he says. “I always used to think about going to New York. It’s still in the back of my mind as something I’d like to do.

“I’ve got a lot of friends who pulled up and moved to L.A. and God bless ’em for being able to do that, but I need a solid lead first. I’m a planner, and maybe to a fault, but I don’t move without a plan.” ■