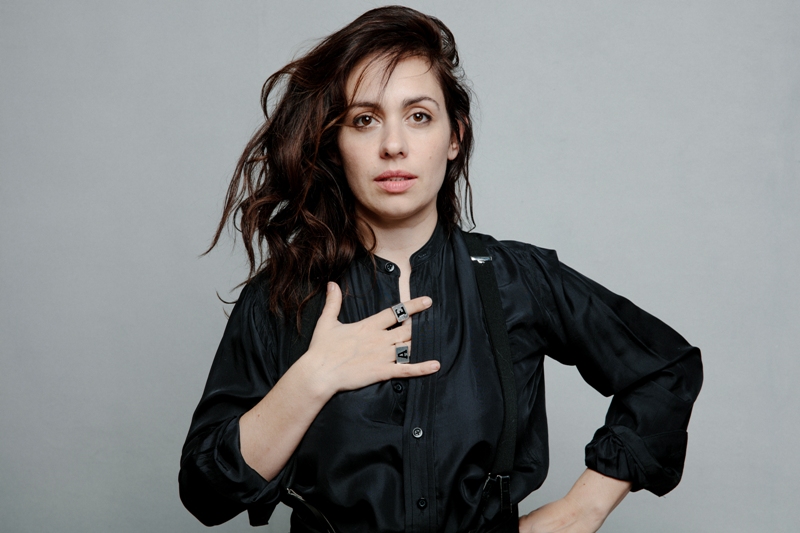 Ariel Engle has nothing to prove.

She’s not a Johnny-come-lately, she’s a scene stalwart. She is la Force but has been other things, and occasionally still is.

You may know her as one half of AroarA, a collaboration with husband Andrew Whiteman (and, technically, poet Alice Notley). You may know that she’s part of Broken Social Scene, and that she has been known to serve as a live show replacement for Emily Haines and/or Amy Millan and/or Feist — who has referred to her as a “sister and beloved friend” and for whom she opened over a series of European dates last year.

Right now, though, she’s la Force. A talent to be reckoned with. A one-time complementary player whose hot-damn of a debut put everyone on notice and herself right in middle of the spotlight.

Someone whose “nocturnal pop” is sexy, brooding and dangerous, but somehow also kind, warm and inviting. Like, you can hear the entry points. You know where you are meant to join in and be part of something and also where you’re supposed to shut up and listen.

We’re two of the only people in a tiny café on a rainy day and the Strokes’ Is This It is playing. She thinks it’s happy, or at least jaunty, and adds that “for most people” bit to reference it.

Her self-titled debut as la Force is a lot of things but it is decidedly not jaunty. Perhaps that’s due to its origin story, in which Engle was “fairly controlling” in regards to her vision for another project.

“This record came about because it was initially an AroarA record,” she says. “Andrew and I were making our second record and then we realized that we weren’t having a good time writing together. We do a lot together; we have a kid together, we’re married, we’re in Broken Social Scene together… His line was ‘I’d love to miss you.’

“I understood what he meant but at first I was like, ‘Miss me later, we’ve got this thing to do!’ and he was like, ‘I want to miss you now, and maybe you need to be in control of this project.’”

We’re two of the only people in a tiny café on a rainy day talking about how hard it is to have goals as an artist and responsibilities to a family. Not too long before we spoke, Stephen Ramsay and Catherine McCandless had put Young Galaxy on hiatus for reasons including their responsibilities to their children

That said, Engle didn’t create la Force because of a creative tiff. “Aside from the fact that we have a kid together and we’re in Broken Social Scene together, I’ve come to the point in my life where I really need to feel like I’m at the helm of something. Certainly musically. So that was part of it, too.”

I set her up with a “so, what are you?” and she obliges with the obvious, “I’m a dictator.”

We’re two of the only people in a tiny cafe on a rainy day talking about the artist as a commodity and a collectible. Something to be consumed. La Force is a vinyl record, a CD, a name on a Spotify playlist, a t-shirt, a tote bag, a concert ticket. Her debut record isn’t even walking yet and people want to know what’s next.

“There’s a need to feed the machine,” she says. “I think that’s why I wanted something to sound not achingly contemporary. It’s important that the music sound like something that has yet to be recorded or [that it] could have come from years ago. I don’t gravitate to the latest thing. To me, that feels like you’re trying to satisfy some cultural convo of the moment. I’m not that interested [in that].”

And, later: “Rather than trying to situate [the music] in a time, I just situated it in myself, which is not achingly contemporary.”

I set her up with a “so, what is it?” and she obliges with the less obvious “I really like music from everywhere. I like music from all times. I just got Spotify in the last four months and it’s so big, I don’t even know what to do with it. I still put on a record and listen.” Then we talk about the resurgence of “cassette tapes” and she mentions Tanita Tikaram’s “Twist in My Sobriety” and then we talk about K’s Choice.

Two people. Tiny café. Rainy day. And now we’re talking about what the Strokes would sound like if they came out today. “I hope they would sound like this,” she says, gesturing vaguely at the music playing around us.

I don’t think they would because New York sucks now and I say so and then we talk about a Canadian city we both dislike because “it feels toxic.” Then she mentions the CAQ and we both make a gagging noise and then I get it. I get why this “interview” doesn’t feel like an interview, why it’s so easy, why it resists a certain amount of reporter/subject structure.

It’s because Ariel Engle has nothing to prove.

Of all the ways we come across new music — a new band, a new song, a new sound — getting a recommendation from a friend who knows their shit will always be the one that isn’t quite like the others. It’s not as sweaty as digging through the bins and it’s decidedly more special than what your bespoke tastes told an algorithm to tell you back.

I was fortunate enough to come across la Force because one day last year singer-songwriter Jasmine Bleile put “Lucky One” on in her car and said, “Check this out.” The moment was like a lightning strike of a snake bite and it produced more questions than answers. What is this? Who is this? Why don’t I know about this? What else don’t I know about? ■