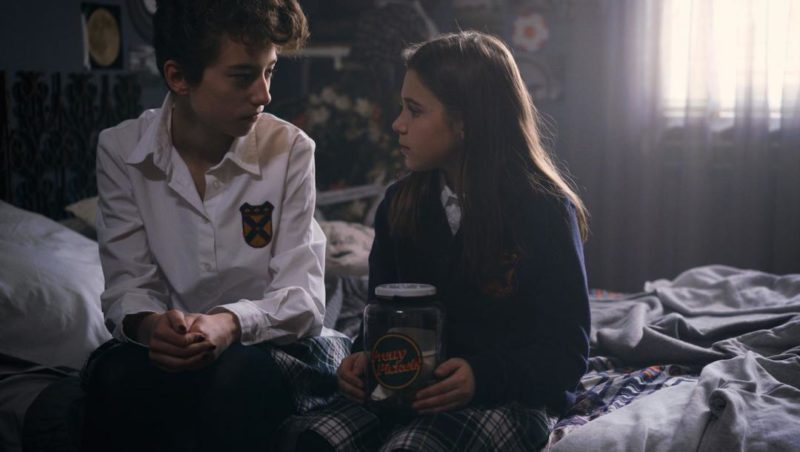 Quebec arthouse cinema has a reputation for being dour and hermetic. There’s this idea that the only difference between said films and the melodramatic plotlines of the evergreen téléroman is how dark and broody the actors play it. You could certainly mistake David Uloth and Chloé Cinq-Mars’ Dérive (The Far Shore) for being exactly that — the signifiers are all there. It’s a highly personal film that takes on a host of controversial topics and one that, even with the best of intentions, sometimes finds itself in undeniably familiar zones. But it also has a weird, prickly comedic tone, lining up great personal pain with a deadpan sense of humour that would make Todd Solondz proud. (Or perhaps not that proud, given that this is Todd Solondz.) Though it seems like a sizeable chunk of Quebec dramas are about grief and shattered families and the difficulty of living in the modern world, Dérive proves that there’s still life in those familiar bones.

Catherine (Mélissa Désormeaux-Poulin) works a job she’s entirely overqualified for and lives in a shabby apartment on the South Shore of Montreal. Her oldest daughter, 17-year-old Océane (Éléonore Loiselle), is a brooding kleptomaniac tomboy whose only real relationship is with an actor (Emmanuel Schwartz) two decades older than her They have a questionable sexual relationship, the power dynamics of which are heavily skewed in one direction. Eleven-year-old Marine (Maèva Tremblay) exists halfway in a world of make-believe. Highly gifted but socially awkward, she befriends the cool mean girl at school (Émilie Bierre) and obsesses over her father André (Réal Bossé), whose nebulous death is the reason for all of this turmoil. It seems André was a drug addict, a fact that Catherine has tried to hide from her youngest daughter -— who just so happens to have been the one who found the body.

That’s mostly thanks to the character of Marine, who stands as one of the great “weird-kid” characters in recent years. Extremely smart and almost cartoonishly diminutive (every other kid in her school is at least a foot taller than her), Marine isn’t great at reading the room. She says what’s on her mind — even if that’s her theory that her dad might not be dead after all, but just faking it like a snake. Even though the character of Marine could be an overwhelmingly sad one, her quirks lend the film some much-needed levity. In its best moments, she makes Dérive feel like Todd Solondz’s Hereditary — a truly warped idea that works pretty well.

Unfortunately, the flipside is the Océane subplot, which treads so much familiar ground that it’s very difficult to feel involved in it. As great and idiosyncratic as Loiselle is in the role, her angsty teenage character stands out in sharper contrast with the more organic and naturalistic aspects of the film. It’s where the film regrettably veers off into téléroman material. Gorgeously shot and at times genuinely affecting, Dérive feels like the kind of personal project that’s so personal, it inevitably becomes a little hermetic. ■