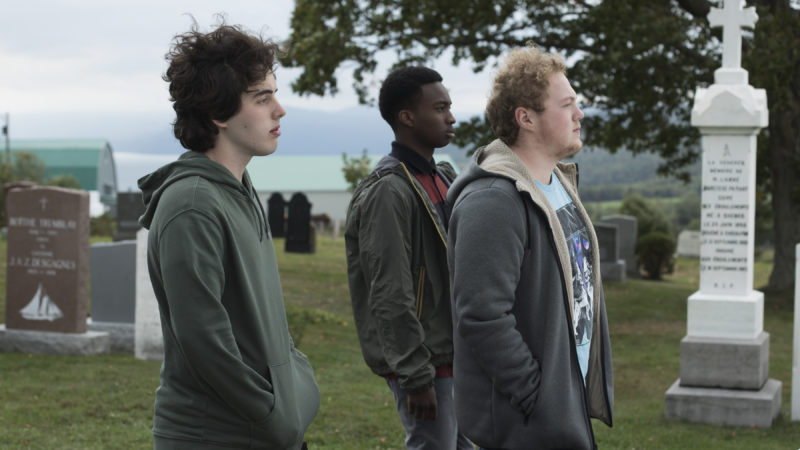 Growing up, I never felt like teenage sex comedies (which were, for one bright, shining moment, sort of the superhero movie of their time) really represented my reality. They seemed purely aspirational because of how much wealth and freedom the extremely mature-looking teenagers had at their disposal. I had to bike everywhere, which severely hampered the hard-partying mentality that these films had instilled in me. I also grew up in a région, the catch-all term for anywhere in Quebec that isn’t Montreal or Quebec City, which made Rémi St-Michel’s Avant qu’on explose a tantalizing proposition.

His debut feature is a lot of things at once. It’s both a disaster film and a sex comedy, set in the région where screenwriter Eric K. Boulianne grew up. It seemed like my prayers from 20 years ago were finally being answered. This was the kind of movie I wanted to see.

The flipside of Avant qu’on explose is that I wanted to see this in 1999, and now it’s 2019. The world has changed tremendously, and it perhaps seems a little regressive on the surface to make a movie about a teenager who desperately wants to lose his virginity before the end of the world. This dichotomy — the chasm between the deadly serious impending tragedies and the relatively frivolous quest of one dork to get laid before it — is what St-Michel and Boulianne sought to explore in the film.

“The movie is dressed up like a Hollywood blockbuster — that was our goal,” says St-Michel.

“It opens with that scene in the submarine,” says Boulianne. (He’s referring to the very first scene in the film, a tense, subtitled sequence in a North Korean sub that’s played straight — or at least as straight as a Roland Emmerich or Michael Bay film.) “It goes right from that action scene to a scene of the main character jerking off. We get into a bunch of dick jokes, the pace is very rat-tat-tat and dialogue heavy. The idea was to make a broad comedy, a coming-of-age film, and rapidly veer into a scene where he has a panic attack and talks to his therapist and you start to think that maybe this isn’t exactly the movie you thought it would be.”

“But then again, all of this is intentional in the sense that this is the kind of stuff we wanted to do,” continues St-Michel. “But our goal was never to mess with audiences and make them believe they were seeing something other than what they expected. Our goal wasn’t to mystify or obfuscate, but to put everything we liked in this movie, everything we thought would add to this cliché of the coming-of-age film in order to blow it up.”

“It’s a zone I’m very comfortable in: juggling between comedy and tragedy,” says Galloy. “That’s what I like about working with Eric and Rémi — the movies they make are never at the extremes. It’s never just fucking funny or just fucking depressing, It’s always somewhere in the middle. They juggle with it, too. One of my great inspirations is Michael Cera, who does exactly that — and that’s really my acting style. I think that really fit well with this particular film, because I’m becoming more and more comfortable within that style.” 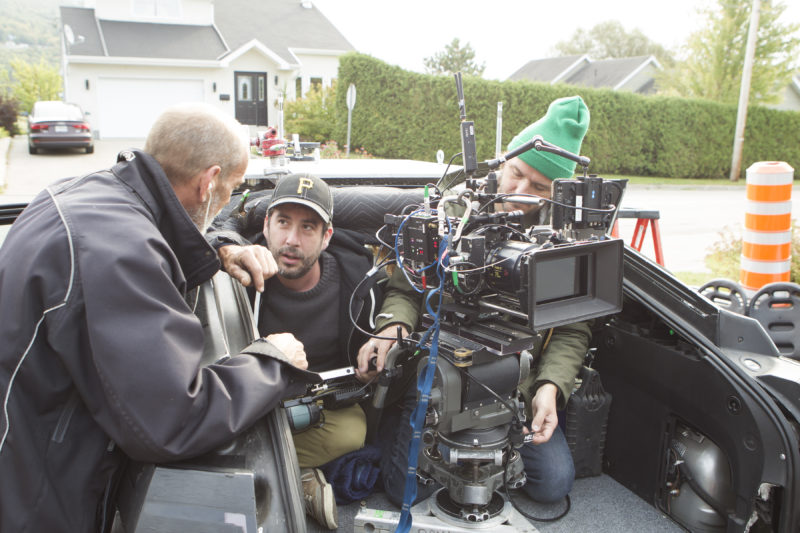 Pier-Luc (Étienne Galloy) lives in the quaint riverside town of Baie Saint-Paul, with his mother and older sister (Julianne Côté). He has essentially two friends: the bombastic Sam (Will Murphy) and the pragmatic, wise-beyond-his-years Hubert (Madani Tall). They aren’t exactly dorks or outcasts, but they more or less keep to themselves. Hubert and Sam have girlfriends, but Pierre-Luc does not, a fact that becomes increasingly clear to him when a wrong move by the Americans explodes a North Korean sub, pushing both nations to the very brink of a nuclear war. As the world’s prospects grow dimmer and dimmer, Pier-Luc becomes increasingly focused on his steadfast goal: losing his virginity before the world ends.

“It’s great that people think we took chances,” says Galloy. “If we want to reinvent the teen movie, we have to go into uncomfortable and unexplored zones. Rémi and Éric weren’t afraid to go there. They make truly unique decisions, decisions that could easily have us fall on our asses — and it certainly makes the movie weird. It’s a weird movie! But I think it’s a good weird movie.”

Indeed, the film strikes a particular balancing act between its puerile boner jokes (Pier-Luc tears his frenulum jerking off in the opening scene, thereby spending much of the movie grabbing at his crotch and wincing) and a very real sense of existential dread. When bad things happen in Avant qu’on explose, they’re not brushed off with the poke-in-the-ribs of something like This Is the End. The film’s Greek chorus is L’orchestre d’hommes-orchestres, a band of one-man-bands (!) who rove in the film’s background, doling out dirgey folk accompaniments.

What’s most likely to get folks talking is a third-act twist in the film that I can’t reveal here, but one that takes a rather murky moral path that could prove too much for some. (It’s at the very least the kind of thing that’s likely to prompt “think of the children” think-pieces from the province’s most predictable pundits.)

“In fact, Tel-Jeunes made a program for high school kids who see the movie,” says St-Michel. “They answer a bunch of questions about what they just saw. But Tel-Jeunes thinks it’s fine! (laughs)”

“Making a movie isn’t making a pamphlet to teach high school kids how to live,” says Boulianne. “But I do think we worked hard to make sure that all the situations are plausible. Rémi challenged me a lot throughout the production.”

“The only thing that I think could really be held against us is that the consequences of Pier-Luc’s actions aren’t really clear by the end of the film,” says St-Michel. “In the context of the film, I don’t really think that consequences are that important. But I suppose that if you want to look for things to complain about…”

“It’s certainly something I find mind-boggling about the current climate,” adds Boulianne. “It’s incredible that people want to change things that are ingrained in the culture, and I think we should absolutely fight for that. But the idea seems to revolve around punishment these days. I was reading some reviews about Three Billboards Outside Ebbing, Missouri. The fact that the racist character in the film changes and is “redeemed” was criticized. But what’s his redemption? His face is badly burned, his life is ruined and he thinks perhaps, after all, he won’t be able to have his revenge. That’s his redemption? That’s pretty soft, to my eyes! Our movie is the same — if you’re looking for shit, you’ll for sure find it, because the characters aren’t necessarily ‘punished’.” 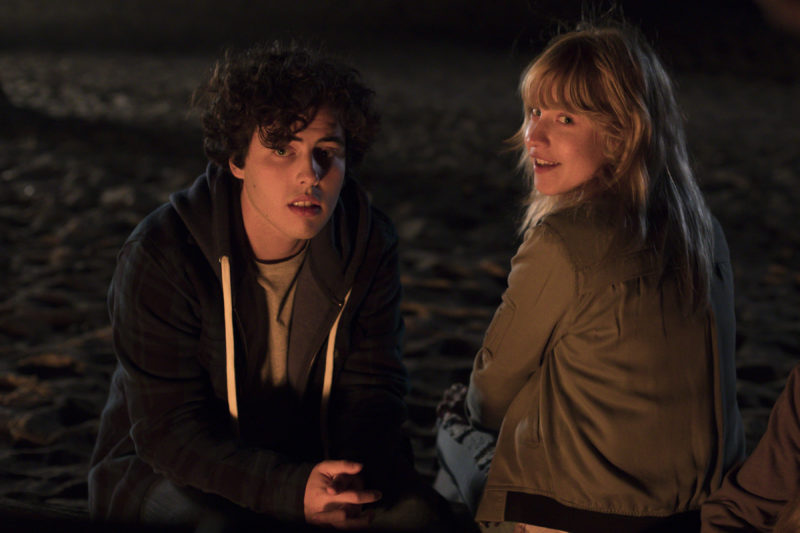 St-Michel, Galloy and Boulianne have all worked together in the past, notably on the award-winning short Petit frère, and it’s clear that their working relationship is one that remains acutely in tune.

“The script barely changed at all from the first version to the shooting script, in fact,” says Boulianne. “We changed some things around, but we took a chance, really. We wanted to put our mark on it, and that meant taking chances. If we mess up, if we fail, at least we’ll know we tried and didn’t do things halfway.”

“We knew we would be zig-zagging and going in all types of directions,” adds St-Michel. “But we had the vision that everything would be coherent. We threw ourselves in fully.”

“People always want to put movies in a box,” Boulianne continues. “This is a comedy, this is a drama, this is arthouse, this is commercial. Quebec is very much like that. But in our case, we’re interested in a little bit of all of that. We’re cinephiles, and we like a little bit of everything. That’s the approach we took, even if we still have to keep in mind what we want to say with the film. We took a few risks, but that was the case for the films we made before. We borrow from what we love, and we love a lot of stuff!”

“The gamble is for the final product to be generous, rather than austere,” says St-Michel. “Even if the film shifts to some speeds or directions the viewer doesn’t expect, it’s not in an extremely artsy or destabilizing way. It stays pretty poppy, pretty fun, in a way that makes it easy to travel through.”

“We tried to be not boring!” says Boulianne. ■