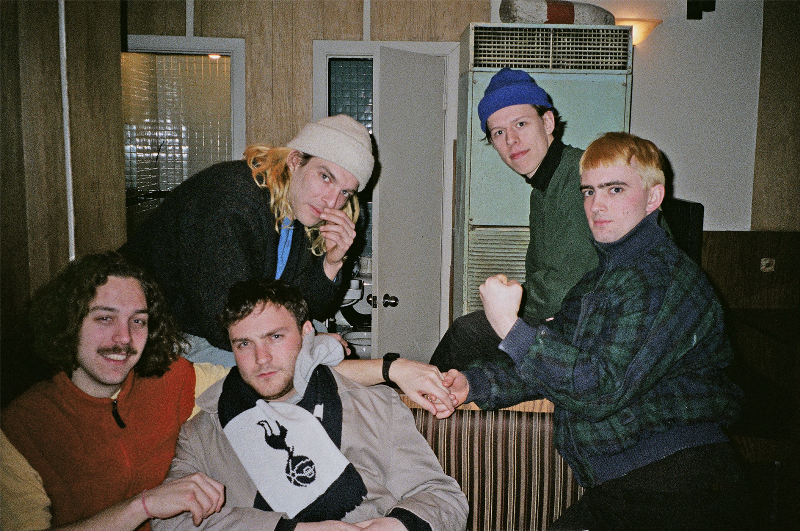 Pottery’s status as one of the most exciting bands in Montreal had been building for months before they put out any music. Prior to the release of their debut single “Hank Williams” in December, the band seemed almost spectral, with whispers of their existence confirmed only by the odd ephemeral appearance — though even those sightings seemed dubious given the grand hype they’d leave in their wake.

The first time I saw them was on a POP Montreal bill last September. Among the dozens of shows I saw that weekend, only maybe one (U.S. Girls) matched the band’s breakneck, kick-down-the-door energy, and even those legendary live performers didn’t seem to do it with Pottery’s laidback and assured coolness. I went home later that night and looked the band up; it took scrolling through about four pages of ceramics classes before realizing they had little to no Internet presence. This was months before they released “Hank Williams” and the anonymity began to fade, but with that my hype only intensified. That first song improbably captured the fierce energy I was so taken with at the show.

In January, I grabbed drinks with the band. I introduced myself and we all piled tightly into a booth, but the five members buzzed amongst themselves, all palpably excited to be together. I heard a mix of personal updates and equipment talk that seemed equally confusing to me, and I soon understood that this was the first time they’d seen each other in a while.

It had been since that September POP show, in fact, which made their elation and embrace of one another — lots of hugs — pretty heartwarming. In the ensuing months, frontman Austin Boylan and guitarist Jacob Shepansky had stayed in Montreal while Peter Baylis, Pottery’s keyboardist, was touring Europe with drummer Paul Jacobs’ eponymous band. Tom Gould, who plays bass, was home in England.

Pottery essentially started on Boylan’s first day in Montreal, when a mutual friend introduced him to fellow BC native Shepansky. “We liked each other so much,” Shepansky told me. They recalled sitting on a friends’ back porch for hours, taking turns showing one another music. One such band was Josef K, whose influence on Pottery is clear.

Another influence is Paul Jacobs, whose fucked-up garage rock the pair were fans of in high school. Jacobs — who moved to Montreal from Windsor after finding the city’s mostly metal scene a drag — remembered doing laundry once and being told by a friend that Shepansky was a big fan.

By that point, Shepansky and Boylan had been writing and jamming for months, out of which came some cuts they’d liked. The two also began playing in Jacobs’ band, in which Baylis, a native of Montreal, was on keys. They all came together as Pottery and played their first show in Feb. 2017. After Pottery’s first bassist left the band, Gould, then a student at McGill, was recommended by Montreal musician ggpeach. He was added to the line-up in Nov. 2017.

“I had heard about the album before I even joined,” Gould told me. Pottery’s first record, recorded in June of 2017, has become something of a legend. The recording sessions took place over only a few days, but almost two years on, it remains unreleased. Sitting on it was in part a product of the complicated logistics of a self-release, but the band also sought to create a sense of enigma and mystery. Shepansky says “‘leave people wanting more’ is the mantra.”

Jacobs added that continuing to like art weeks, months or even years after its creation is a sign that it’s something great. Still, the band admits to having had moments of collective impatience some nights, when they seriously considered just putting it online. Of course, those nights all turned to mornings without a release. But the No. 1 EP will finally come out on Royal Mountain Records on May 10. (Listen to a track from the EP below.)

In this long gestation period, Pottery have become somewhat over-familiar with the songs from their first record. On top of some one-off shows, they opened for Parquet Courts when they came through Toronto and Montreal last year in the summer and winter. (Friends filled in for their headlining M for Montreal show and when they opened for Parquet Courts.) All of this energized them to expand their repertoire and look beyond the first LP — they’re already working on their second album.

This creative drive seems as propulsive as their sound, and its process was explained to me as an alchemy of the members’ catholic interests, a combination of eclectic styles like punk and country, leading to a sound the band described as a “melting pot of influences.” The guys from Pottery say they’ll add some of these new tunes to their set to keep things interesting over the next few months.

Pottery have a busy period ahead of them. On March 7, they’ll headline a show at Bar le Ritz, then play a couple of showcases at SXSW before opening for Viagra Boys on their North American tour. They’re also scheduled to play a few festivals in Europe, and more dates are being planned. And so it seems the band’s mantra has paid off: people emphatically want more. Pottery, it’s clear, is ready to give it to them. ■

A handy list of swing ridings for Anything-But-Conservative voters.