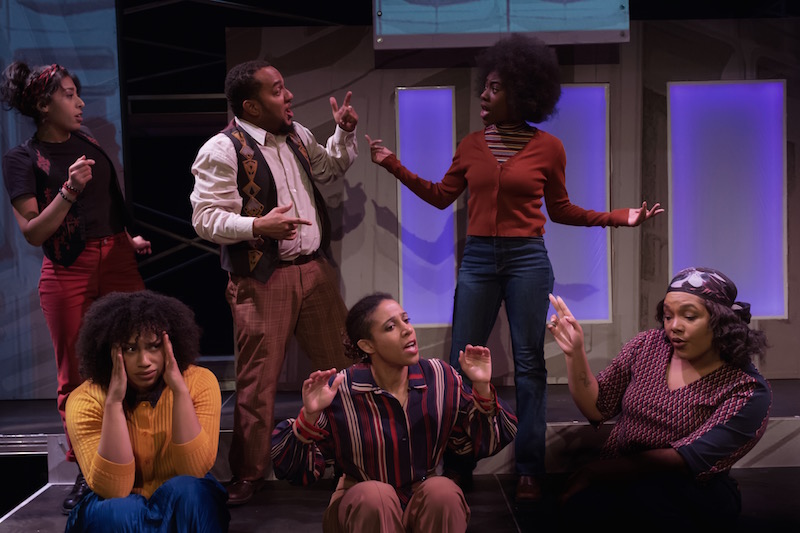 Forgive me this cliché, but if you see one independent theatre show this season in Montreal, make it Blackout. It is an education, an ambitious portrait of fury and a really fun, triumphant work of art.

Fifty years ago this February, dozens of students occupied the ninth-floor computer labs in the Hall building of what is now Concordia University. Months had passed since Caribbean students at the school lodged complaints of discrimination against a biology teacher. They said Perry Anderson graded his black pupils more harshly than their white peers, and viewed Anderson’s behaviour and the administration’s slow move to act as a symbol of institutionalized racism within the school, which was still named Sir George Williams University.

Negotiations stalled, the police came to clear out the protesters two week later. With the images of papers and computer equipment streaming down Hall’s white facade, smoke pouring out of its windows and students being arrested, the action became known around the world as the Computer Riots [or at very least, the Sir George Williams Affair —Ed.] and was an instant flashpoint for race relations in Montreal, Quebec and Canada.

Revisiting this moment in history is no easy task to undertake, but the team at Tableau d’hôte Theatre has taken a studious approach with many hands on deck. Director Mathieu Murphy-Perron assembled archival material and research, and a year ago, a group of artists, including some of the performers in today’s production, began to sift through the documents as they produced over 200 pages of text.

The result, Blackout, is a play written by committee, which shows in the structure, varied threads and the frequent breaking of the fourth wall. Hats off to the team, including assistant director Tamara Brown, because what they’ve created comes across as artfully organic, a well-read text that blends in spoken word and dance while name-checking Gil Scott-Heron, Nelly and Shakespeare’s witches. With a foot in the past and one in the present, Blackout also references Black Lives Matter, SLAV, Marie-Joseph Angélique and Viola Desmond.

Blackout is a modern interpretation of what happened in 1969. It is sympathetic to the students who took action and condemns those who didn’t support them. The student roles do not take the names of those originally involved, but one character is given a Canadian identity — a woman from Little Burgundy trying to fit in with her Caribbean classmates.

The cast is notably composed of actors of colour, drawing from a deep well of talent in this city and beyond. Shauna Thompson shines as one of the group’s brassy ringleaders, as does the always-luminous Lucinda Davis, who gets to chew the scenery as white student Sylvie and the Dean.

The play is not pedantic history lesson, leaving room for the emotional impact of the students’ frustrations and fears. Even Professor Anderson gets his moment, with actor Dakota Jamal Wellman delivering an academically austere metaphor of the school as a cell with rebellious bits of protein that cause friction and disorder. The stage is swept with green light, projections and twinkling score as the actors move below him, chains of protein dancing and breaking off.

The lighting, visual and audio design is top-notch; the multi-level set is dynamic, rounded out by details like footage of fluttering papers and the sound of handcuffs clinking.

Toronto-based choreographer Rodney Diverlus drew inspiration from his work with Black Lives Matter as well as black culture and advocacy, using stomping, clapping and chanting, incorporated especially into the movement of the chorus which inspires and mirrors our heroes. (One point of contention: I wish I heard more from these four performers.)

Blackout is staged in a professional basement theatre, floors below from where the discrimination, negotiations and protests unfolded. I spent four years as a student, employee and journalist at Concordia, and return regularly to take in theatre in this space. I never stopped to ask, but I learned about its namesake while sitting down on opening night.

D.B. Clarke was the acting principal at Sir George Williams University at the time of the Computer Riots. Fourteen months later, the theatre bore his name. Five years after that, the school would merge with Loyola College to form today’s Concordia University.

As the original computer labs no longer exist, Blackout is not just a lesson in how history is made and shaped, but a reminder of how it can be forgotten, too. ■

Tableau d’hôte Theatre’s Blackout: the Concordia Computer Riots continues at the D.B. Clarke Theatre at Concordia until February 10. Tickets are can be purchased at tableaudhote.ca/blackout and by calling 438-788-3529.

Perhaps unsurprising given the diverse field of opposition parties to choose from among voters who are dissatisfied with the Legault government.

Canadians are still loving The White Lotus following its big night at the Emmys and ahead of the premiere of season 2 next month.