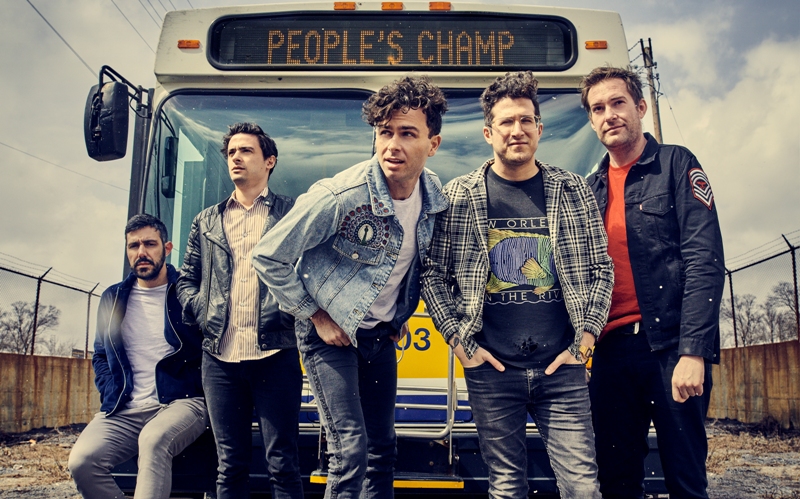 Five albums into their career, Arkells have ascended to a music-scene plateau populated by very few rock bands these days. Call them Can-rock royalty if you want — their American counterparts are the likes of Imagine Dragons or Maroon 5 (like Adam Levine and his stint on The Voice, Arkells singer Max Kerman has gained extra showbiz clout with a gig on reality TV show The Launch). But given their pure-driven sound and Canadian humility, those comparisons do Arkells a disservice. For a mainstream band, Arkells are amazingly likeable.

Formed in Hamilton in the mid-aughts, the band has indie roots, initially signing with Dine Alone Records before being scooped up by Universal. Their beginnings were as basic as they come.

“One of the reasons I went to McMaster (University) and ended up in Hamilton was that I wanted to meet new people to jam with,” Kerman says. “I figured there’d be other like-minded people there who wanted to start a band. On the first day of school, I met Mike, our guitarist, and on the second day, I met our bassist Nick. During welcome week, you can introduce yourself to anybody and it’s not weird, it’s just friendly — that’s one of the fun parts about going to college: everybody is in exactly the same boat. I was wearing a Sam Roberts t-shirt — this was the fall of 2004, Sam Roberts was one of my favourite Canadian artists — and Nick said, ‘Hey, I like Sam Roberts, too.’ That’s how the band started.”

Raised in Toronto on his dad’s Beatles and Motown LPs, Kerman jammed with the neighbours and played in high school bands. He knew he’d been bitten by the music bug when he rented a home recorder one weekend and committed to figuring the damn thing out.

“I don’t have much patience for technology,” he admits. “I couldn’t even put together an Ikea set, that’s for sure, but I realized I must really care about recording this song or this idea if I’m spending hours and hours trying to get this thing to work. I remember recognizing that in the moment: ‘If I’m willing to put myself through the torture of figuring out this ancient recording device, I guess I love this.’”

Arkells’ success across Canada (they recently played to 24,000 fans in Hamilton) is often credited to constant touring, and to the power of their live show, something Kerman takes great pride in. He’s often made reference to the importance of concerts as communal experiences, especially in times like these, when people are increasingly lost to social media and limiting themselves to a very small bubble.

“The thing I take from being a fan of the concert is, more than anything, the spirit in the room, what the vibe is like, and my favourite concerts are ones where everybody is equally invested in the evening — the band and the crowd. I recently saw Kacey Musgraves at the Danforth Music Hall, and everybody there was so excited to see her. They were singing along to every word and it was a Friday so no one was thinking about going to work the next day.

“In the summertime, I saw Jay-Z and Beyoncé at FirstEnergy Stadium in Cleveland, and Beyoncé, I think, brings out the best in people. Watching her perform, you see how hard she’s working and how much she cares, and everything she’s achieved in her career is something we all celebrate, everybody in the crowd.”

Given the ubiquity of Arkells’ anthemic 2017 single “Knocking at the Door” (practically every major sports event in the year that followed used it as theme music), it’s no surprise that the band chose to work with the same producer, Eric Ratz, on their latest album Rally Cry. With expanded instrumentation, deeper groove and as firm a punch as ever, the band’s sound is tight, though their approach to recording was less rigid than it’s been in the past.

“I’ve become a believer in deadlines and also I’ve become really confident in our band’s ability to work things through in the moment,” Kerman says. “We wanted to be really diligent and responsible knowing that we had studio time booked and it’s a costly thing — we need to be as hyper-prepared as possible when we enter the studio. But I feel that we’ve all grown as musicians and we all trust our instincts and our ability to problem-solve and to keep digging for the right creative solution, so I felt more confident in just going in with a general framework and know that we’re going to get results just by virtue of being together and working with a deadline.”

The first single from the album was “People’s Champ,” an obviously anti-Trump song that never utters the name of the heinous POTUS, but addresses him directly: “I’m looking for the people’s champ, and it ain’t you.”

There wasn’t one specific WTF Trump moment that inspired “People’s Champ;” it actually emerged from an assignment of sorts.

“Speaking of deadlines, I started doing this thing with my roommate Greg where he’d go to work in the morning and I’d tell him to give me a songwriting assignment: give me a lyrical theme and a musical theme and maybe I’ll have something for you by the time you get home from work. He told me one day, ‘You’re always ranting about Trump, so write a political song and make it kind of throwback groovy à la Stevie Wonder meets Arcade Fire — do that.’

“The conundrum with Trump is I understand if you don’t like the status quo and you think your government isn’t looking after you, or that you’ve been left behind in some way, and I would agree with anyone who felt that way,” Kerman explains. “But to assume that this guy is going to sort it out? That was the problem I had. [The song] expands on that idea.

“I mean you wouldn’t want this guy involved in any aspect of your life, whether he was a relative or a teacher or an auto-mechanic. If someone tells me they’re anti-Hillary, I get it, there’s problems there, too, but this is definitely not the guy to solve your problems.” ■