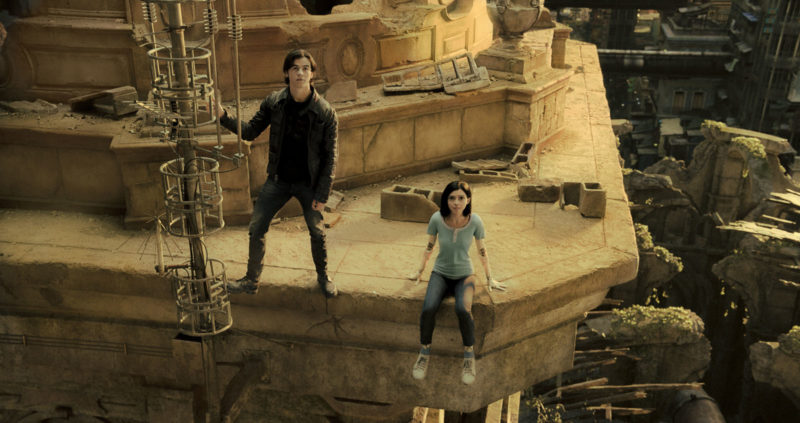 It would be short-sighted to claim that oughties blockbusters don’t take risks; studios spend hundreds of millions of dollars on shit like John Carter, Jack the Giant Slayer or Monster Trucks in the hopes that these movies connect with audiences even though, on paper and in retrospect, it seems ludicrous that they would appeal to nearly anyone. If I have any nostalgia about the ’90s (and I would hope to keep it to a minimum), it’s that the blockbuster output from the studios really betrays that no one had any fucking idea what they were doing. The first four Batman movies, for example, are so off-the-wall from a purely visual standpoint that it’s very hard to see them as finely orchestrated machines for selling toys and Happy Meals — even if that’s exactly what they were. The key difference between then and now is this idea that filmmakers were handed enormous franchises and proceeded to do whatever they wanted with them.

This isn’t necessarily a good thing. I’d argue that the overall quality of whizz-bang blockbusters has gone way up in the last 20 years or so, but it does make me yearn for a time when we would see a movie assuming it would be bad but never knowing in what way. Things have become so streamlined that there are no surprises. Case in point: James Cameron’s Avatar is the highest-grossing movie of all time. Everyone has seen it. My mom has seen it, and the last movie she saw in theatres before it was Richie Rich. Everyone has seen it and no one remembers it; I don’t even know if I liked it or not, even though I’ve definitely seen it. Avatar is such a perfectly conceived blockbuster that it almost doesn’t matter if it exists at all. It could disappear from the world overnight and it would still be the defining movie of something or other.

Alita: Battle Angel is, in many ways, the most modern of blockbusters. It’s a high-tech adaptation of a relatively niche property that nevertheless has a lot of built-in nerd appeal. It’s been in production in some form or other for nearly two decades, which lends it this aura of being a movie that actually couldn’t be made until now – a film with technology so off-the-wall that only the sharpest of cutting edge methods could ever will it into being. It’s, I imagine, the kind of movie that many people dream of when it comes to their particular, somewhat niche-y favourites -— provided, of course, that that favourite is a kind of dopey, extremely-rooted-in-the-’90s anime series whose vision of the future is still predicated on how cool rollerblades are.

The only thing you absolutely need to pull off for the vision of such a specifically dopey concept is the input of a couple of “auteurs” that are similarly rooted in the now-distant ’90s. Though James Cameron did not officially direct the film, his stamp is all over the obsessive world-building and grandstanding tendencies. Though Robert Rodriguez has never made a film of even one-third this scope (literally — the budget for Grindhouse, his highest-budget effort, was about a third of this one), he brings a lot of his image-obsessed, scrappy/violent imagery and teen-boy idea of cool. Alita: Battle Angel brings together the two most explicitly “watch me blow up my toys” filmmakers working today and gives them an almost infinite source of toys to blow up.

A catastrophic war has forced most of humanity to live in Iron City, a sort of post-apocalyptic and post-identity junk metropolis in which Dr. Dyson Ido (Christoph Waltz) works as a physician to human/robot hybrids. While surveying the junk that falls from the sky city of Zalem, Ido finds a mostly intact robot torso that he rebuilds into a teenage girl he names Alita (Rosa Salazar) after his late daughter. Alita doesn’t remember her past, but she doesn’t really start right from the beginning, either – things are certainly sped up when she meets a hunky, Robert Rodriguez-style guy named Hugo (Keean Johnson), who in turn introduces her to the most popular sport in Iron City: Motorball, essentially a destructive, robotic variation of roller derby, Motorball may well represent Alita and Hugo’s key to Zalem, a supposedly idyllic world that they both dream of. In the meantime, however, Alita has to contend with the fact that her “father” is secretly a Hunter-Warrior, an independent bounty hunter who can pick up criminal bounties on the side, and that all this has gotten them mixed up with a nefarious Motorball fixer (Mahershala Ali) in cahoots with Ido’s ex-wife (Jennifer Connelly). 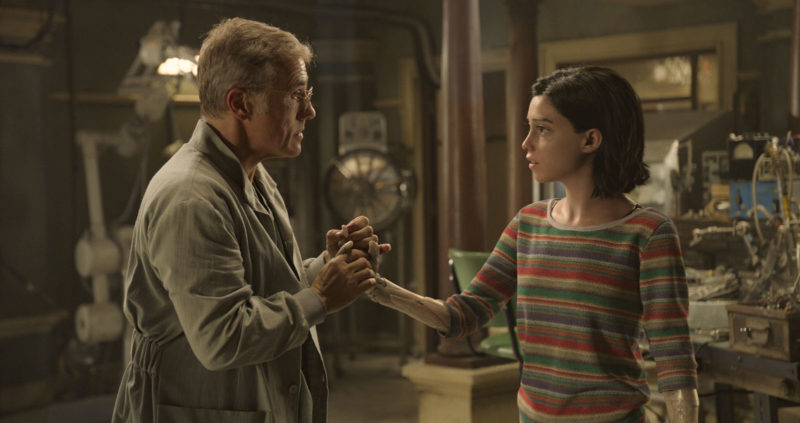 Suffice to say that Alita: Battle Angel is inelegantly (but rather efficiently, I must admit) packing way too much plot into one film; it’s the kind of movie that cannot possibly work without the characters pausing once in a while for an exposition dump. That happens a lot in Alita: Battle Angel and, folks, I hate to have to remind you: James Cameron and Robert Rodriguez are two of the worst directors of dialogue currently working. There’s practically no line of dialogue in this entire thing that sounds like a human being would say it — and it somehow gets worse for the robots. Tin-eared, hokey, you name it.

That matters less here when you consider what Alita: Battle Angel is dealing with. Like the Wachowskis’ Speed Racer, it seeks to recreate the tone and pace of anime. While Alita is nowhere near as hypersensorial and caffeinated as that film, it strikes a nice balance of tone between narrative density and tonal simplicity. A lot of that is owing to the main character – I would praise Salazar’s performance but it’s actually pretty hard to separate it from the special effects that surround it. If you see a still of Alita, you’ll certainly notice that her features are exaggerated to a nearly grotesque degree – oversized anime eyes and a not-quite-proportional body. Under usual circumstances, this would be a one-way ticket to the Uncanny Valley currently peopled with all of Robert Zemeckis’ terrifying mo-cap nightmares… but it isn’t.

Maybe it has to do with Salazar’s expressive, guileless performance; maybe it has to do with Cameronian advancements in technology so precise that I can’t even pick up on them. But I think what ultimately makes Alita work marginally better than your average arcane, overstuffed blockbuster is that you actually feel the dorky glee of its creators boiling below the surface. Rodriguez gets to let loose with his trademark ultraviolence (though this is rated PG-13, it has absolutely the most decapitations and brake-fluid-spattered limb dismemberments of any kid-friendly movie I’ve seen) and Cameron gets to watch his creations dance around in his diorama. Both Rodriguez and Cameron have exact doppelgangers in the film, characters made up to look like them, down to the smallest detail. While getting into what that would constitute major spoilers, it’s essentially both of them taking pictures of their hands as they play with the toys.

In many respects, Alita: Battle Angel is a mess. Its supporting cast is way overqualified for the kind of material they end up delivering, it packs altogether way too much in for a movie that explicitly sets up multiple sequels (this is post-Titanic James Cameron, after all) and it’s more than a little silly. But more than anything, watching Alita: Battle Angel, I felt like I was watching something that I couldn’t quite predict. I felt like I was seeing something that was, for better or worse, not shit out by a committee wanting to maximize profits in the Chinese market and sell a shitload of action figures… even if that’s exactly what Alita: Battle Angel is. And I guess that’s ultimately what I liked about it: it brought me back to the possibility that there could be danger — as infinitesimal and as meaningless to me as that might be — to a movie made to sell Happy Meals. ■