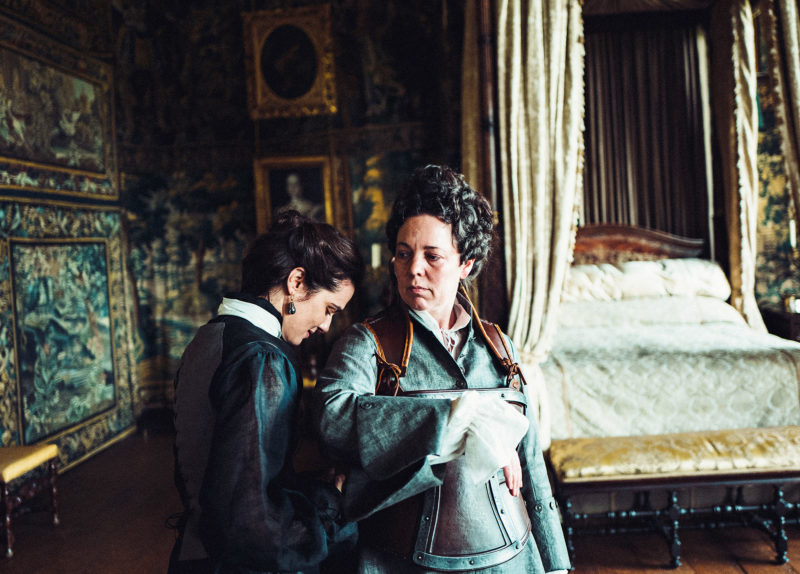 Rachel Weisz and Olivia Colman in The Favourite

There’s something to be said for polyvalence and chameleonic qualities in art. If a musical artist puts out, say, three records that sound the same in a row, I tend to check out. It’s difficult to extend yourself artistically if you keep doing the same thing, I imagine, and there’s something extremely exciting about seeing someone step out into unchartered territory, even if they mess up. I would tend to hold a director like Steven Soderbergh in the highest esteem — except that sometimes, that isn’t necessarily the goal. I can think of a good dozen filmmakers from whom I only want to see the same thing over and over, filmmakers who have made that very same repetition a part of their art.

Until I saw The Favourite, I would have lumped Yorgos Lanthimos into that category. His last four films have very different premises, but they all share a similar affectedly stilted and bizarre tone, concerned with the power dynamics between people without necessarily being concerned about their inner life. None of Lanthimos’s films have quite measured up to the brain-expanding experience of his breakout Dogtooth, but I would have been happy to see him put potbellied A-listers in impossible moral quandaries for the rest of his career. The Favourite is a costume drama and Lanthimos’s first time directing a film that he did not write; that, in itself, represents a significant departure from his previous work. But this is not a case of an acclaimed foreign filmmaker being brought in to direct a dull, overwrought bodice-ripper: The Favourite is very much in line with Lanthimos’s style, a fierce, caustic comedy that feels like Whit Stillman’s Love & Friendship turned up to 11.

Abigail Hill (Emma Stone) was born to a rich family that has fallen on hard times. Jbless and aimless, she decides to try her chance at the royal palace, where her cousin Sarah, the Duchess of Marlborough (Rachel Weisz), works as a close advisor and confidante to Queen Anne (Olivia Colman). Sarah is reticent to give her cousin meaningful work, partially because as a close personal friend (and sometime sexual partner) of the sickly, demanding Queen, she enjoys a freedom and privilege that few other subjects have. Sarah essentially runs the place as if she were the Queen while the Queen herself is laid up with gout. She doesn’t hesitate to take executive decisions when her lover is incapacitated, which is most of the time. Once Abigail figures out that the only way to get a leg up on her current situation is to become the Queen’s new favourite, what follows is a battle of wits where absolutely no one plays fair.

Though the screenplay (by historian Deborah Davis and Tony McNamara) has a basis in reality, The Favourite is not overly concerned with the minutiae of history. All of the characters here are people that really existed and had some form of relationship equivalent to the one depicted here, but it goes without saying that there’s a bit of revisionism and a cranking of the intensity that occurs here. From its first scenes, in which Abigail recalls riding a stagecoach with a man pulling himself and falling into a puddle of mud that’s she soon informed was most likely human shit, The Favourite works in a cynical and somewhat contemporary version of the past. I’m all for it, personally.

Lanthimos has also dropped his usual sterile and precise visual style for something significantly more opulent. It’s a colourful and visually animated tale, peppered with an array of fisheye lenses only rivalled by Hype Williams. It’s miles away from being staid and dusty, a film where the production design is clearly opulent and extravagant but also feels lived-in and realistic. So often these films ultimately wind up a triumph of production design that deserves to be in a museum; it’s hard to imagine anyone actually inhabiting their pristine interiors. The Favourite is covered in sweat and mud and vomit (it’s the pukiest movie of the Christmas season by a wide margin, outpacing Vice at a 4:1 ratio) and the filthy vestiges of the outside world.

What The Favourite is above all else is ferociously funny and engaging, a flurry of bon mots and cutting insults delivered by three actresses doing some of the best work of their career. Lanthimos takes the foundation of your typical comedy of manners (someone — possibly wearing a large hat — delivers a pithy mic-dropper and all but floats out of the room) and turns it into a deathmatch. Though there are male characters in the film (a dandy-to-end-all-dandies who enters a contentious “friendship” with Abigail, played by Nicholas Hoult, and Abigail’s eventual, ineffectual high-class husband played by Joe Alwyn), they’re treated as mere distraction — squabbling figures of interruption meant to be insulted and cast off.

Lanthimos’s detractors have often accused him of having contempt for his characters, of being quasi-sadistic towards them or using them as props. That’s certainly an argument that can be made for his previous films because they create their own warped sense of reality — which is not something that applies to The Favourite. It’s his most accessible film by a mile, and yet it feels radical in the way it ignores all of the rules and tropes of the costume drama. I would have watched Lanthimos do the same thing for the rest of his career, but this is even better. ■

The Favourite opens in theatres on Friday, Dec. 14. Watch the trailer here: