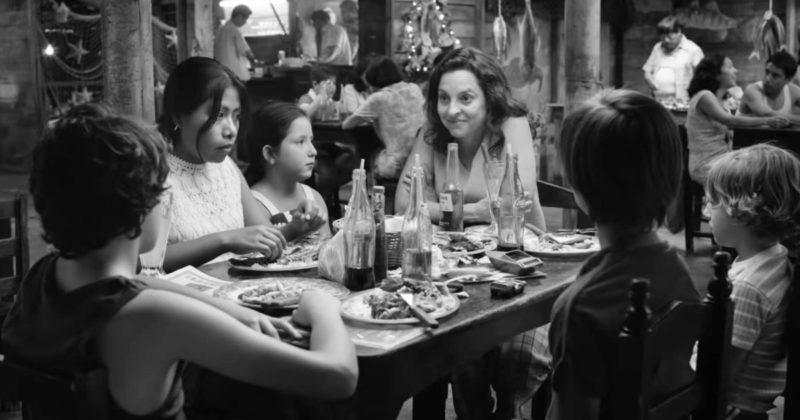 There’s nothing hackier or more book-report-y than opening a review of any kind with a definition of a vague concept, so I’ll spare you that indignity — but Alfonso Cuarón’s Roma did have me reflect on the concept of nostalgia. Roma is not a nostalgic film in the sense that I understand nostalgia to be. (In my mind, nostalgia is as toxic an emotion as hate, one that tickles your pleasure receptors through statis rather than change.) Nostalgia is why we have, truth be told, a lot of the world’s current societal problems. We hold on to the past because it’s what we know, less out of a sense of ethical righteousness than out of comfort. I don’t get that sense from Roma; it is not the filmic equivalent of an old guy with a goatee furiously typing “THIS IS REAL MUSIC” on a Greta Van Fleet YouTube video from the corner of his disused suburban rumpus room where he used to jam with the boys before life got in the way.

No, Roma is a film that plays on memory and (more specifically) the nature of individual memories in a way that isn’t yearning and pathetic in the way that nostalgia tends to be. Based in part on Cuarón’s own upbringing, Roma treats the not-so-distant past as it sits in our own minds as a mix of crisp and sketchy images where the important and the completely throwaway trade off indiscriminately. Roma isn’t Cuarón’s story, and I suppose that in this day and age you can take umbrage to the fact that he’s telling a story that’s not his. What sets Roma apart from all that is that it’s very much designed as an imperfect story being told — a story where things are being left out, where characters are deliberately taking up too much space and where the goal is very clear.

Cleo (Yalitza Aparicio) works as a live-in nanny for an upper-middle-class family living in Mexico City. The family’s patriarch, Antonio (Fernando Grediaga) works as a doctor and spend a whole lot of time overseas. It’s clear from early on that the household (which consists of the mother, grandmother and four children ranging from a preteen to a roughly five-year-old toeheaded kid named Pepe) depends on Cleo more than they would ever admit — nothing happens without a hand from Cleo during at least one of the steps.

As the weeks draw on, it becomes clear that Antonio is not really working on a super-secret and important project in Quebec. He has a mistress, and he’s shirking his responsibilities, a job which ultimately falls onto the person that was doing it anyway — Cleo. She isn’t particularly well-appreciated by her employers, though she is treated like an almost invisible member of the family.

In her spare time, Cleo is entertaining the idea of a romance with Fermin (Jorge Antonio Guerrero), an attractive but somewhat weird, martials-arts-obsessed dude who isn’t necessarily in it for the long haul — but who represents the displaced Cleo’s (who speaks the Mixtec dialect with Adena, the house’s other nanny) only contact with the world outside the family.

And so Roma unfolds methodically, as a series of tableaus that pair the banality of everyday life with Mexican history. Cuarón is just as likely to dwell on Cleo cleaning up the dogshit from the family’s too-narrow garage as he is to turn his camera towards the Corpus Christi massacre. What’s most striking about Roma is what Cuarón has decided to feature and what he’s decided to leave out: there are moments of heavy drama and moments of utter banality juxtaposed in a sort of tapestry of memory that matches the way we remember our own lives. It’s unclear which of the kids — if any — is meant to be Cuarón, but the film isn’t told from the kids’ point of view; it’s told from memory, with whatever that entails.

The second most striking thing about Roma is that Cuarón is so fucking good at making movies that it sometimes feels like he’s just straight-up bragging. The ambulatory nature leaves a lot of space for set pieces, and Cuarón (who acted as his own cinematographer) is all too eager to sink his teeth into them. From nervy tracking shots through the chaotic streets of Mexico City to a sequence in which he turns the father’s shiny towncar into a mysterious abstraction of parts and angles, Cuarón is in full control here.

Truthfully, it can get a little bombastic. Some of the ambling comes curiously close to being meaningless aesthetic flexing, but the film is anchored by Aparicio’s performance and a general lack of artifice to the storytelling that makes even Cuarón’s most egregious flights of cinematic fancy palatable. (He also gets cute with it: clips from the 1969 movie Marooned are prominently featured. Marooned was, of course, Cuarón’s chief inspiration for his 2013 film Gravity.)

Frankly. Roma sees Cuarón skating on thin ice. It’s a difficult feat to make a movie that’s this nakedly personal and this openly concerned with aesthetics. (The sound design — optimized for Dolby Atmos — is particularly mindblowing in that regard.) It’s a very thin line between being moving and being masturbatory, and what takes Cuarón out of one category and firmly into the other is that very palpable lack of toxic nostalgia. Roma isn’t particularly rose-tinted or even shaped by that looming spectre of the way things used to be; it’s a story about the stories that shape us. ■

Roma begins its one-week exclusive engagement at Cinema Moderne (5150 St-Laurent) on Friday, Dec 7. It premieres on Netflix on Dec 14.