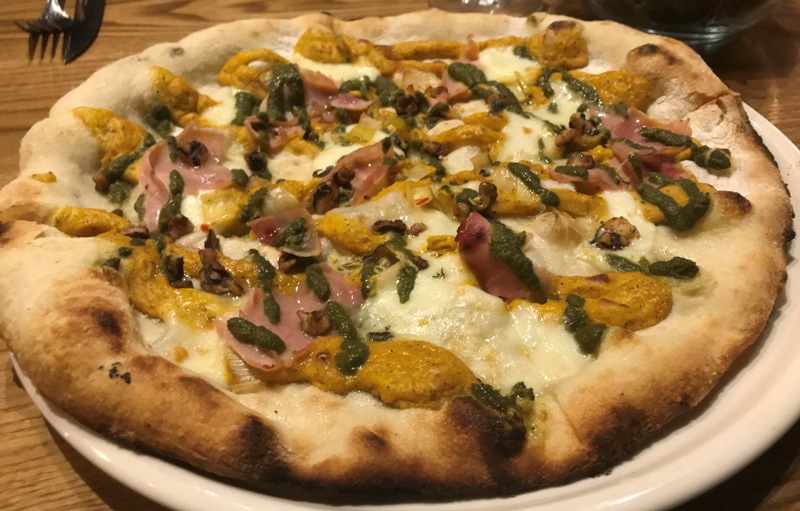 If you’re anything like me, you might have noticed a trend in the ebb and flow of Montreal’s bigger and more anticipated restaurant openings and closures: Italian has been one of the hottest cuisines in 2018. Be it pizza, enotencas, trattorias or sandwich shops, some form or another has consistently popped up across the city throughout the year — coincidences are a funny thing. Even though the last few years have been vibrant with different cuisines, it’s nice to have the sun rise again on a familiar face.

Even near my home in Verdun, where we lost the decades-old institution Cucina Linda, another Italian restaurant appeared soon afterwards down the street: Rita, a trattoria with a menu based on fresh pasta and a smoking pizza oven. The inspiration comes from its principles Joey d’Alleva and Sophie Bergeron, as both of their Italian grandmothers bore the same name. Along with Marc-André Paradis of O’Thym and Frédéric Leblond of the nearby Wellington, they’ve set out to create an ode to comforting traditions.

Dressed in plush leathers, a gold-dark green colour scheme, brick, wood and tile and walls adorned with family photos, Rita’s design is comfortable while undeniably sleek. It’s a perfect place for a family meal, so I brought a larger group. Our server for the evening was immediately attentive, though slightly overbearing with his constant use of the word “delicious” for everything we considered that evening — but he was inviting nonetheless.

That deliciousness began with the cocktail program. While not par for the course in Italian eateries, it was all puntastically Montrealer and satisfying, from the Nun’s Island Iced Tea to the Bicycle Thief — names you’d take as the joking titles bartenders come up with in their off-hours while experimenting on their friends. The wine, too, was well-chosen, though my dining partners for the evening had their targeted choices in lieu of the server’s suggestions (but everything, we were assured again, was “delicious”).

The night’s meal opened up with three appetizers to get things going, one each from Rita’s selection of antipasti, insalata and contorni to whet the appetite. We opted for the spiedini ($11), Kamouraska lamb skewers available only two days per week. Thin and none too heavy, still sizzling slightly on the plate when they touched down, the skewers’ spice mix was certainly flavourful while the portions left wanting for more — a surprisingly delicate start. Nonna’s green salad ($8) came next and was quite possibly the plainest dish of the evening: Barbaresco with radicchio and pickles with a light balsamic. I’d sooner recommend the gorgonzola with its arugula, blood orange and mascarpone for three bucks more; this restaurant is suited for more special (though informal) occasions than the quick-snack quality of that green salad. To the kitchen, I’d suggest letting your freak flag fly a bit more; compared with the other dishes of the night, the green came off as replaceable. 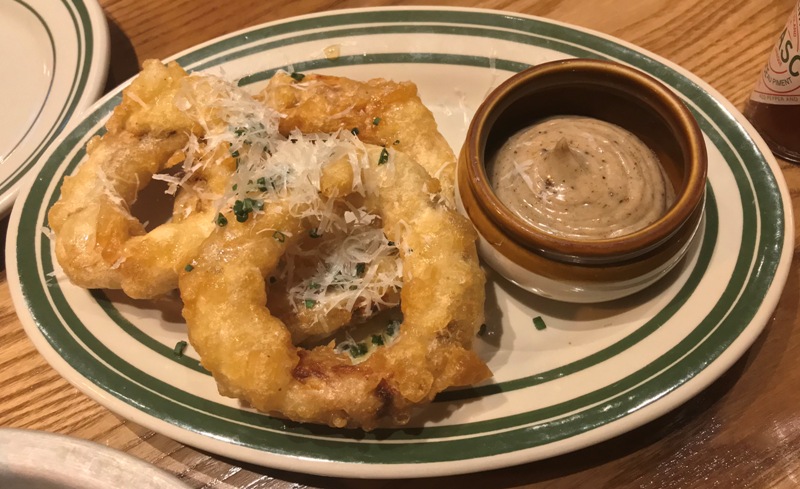 Our succession of dishes from there on out were lush, surprising, fun or a combination thereof. Fried rings of butternut squash ($11) in a light and airy batter, served with a black garlic aioli, was the kind of dish that brings on that al bacio hand gesture — its quality was that of a kiss. The contorni of zucchini peelings ($9), fried soft and served cold alongside cherry tomatoes and garnished in mint and za’tar, was inventive yet simple in its flavour pairings and a decent nod to Italian staples.

But what’s a visit to Rita without pizza, without pasta? I had high hopes for the Autunno pizza ($19) — bechamel sauce with squash and fontina, pear, prosciutto, sage, fiori di latte and caramelized walnut — but as with the green salad, I might’ve been choosing poorly. I can understand Rita’s seasonal bent with the toppings here, but with so many mellow flavours milling about, nothing was really singing in this pie. Even the crust, for a Neapolitan take, was a little tough to the tooth. 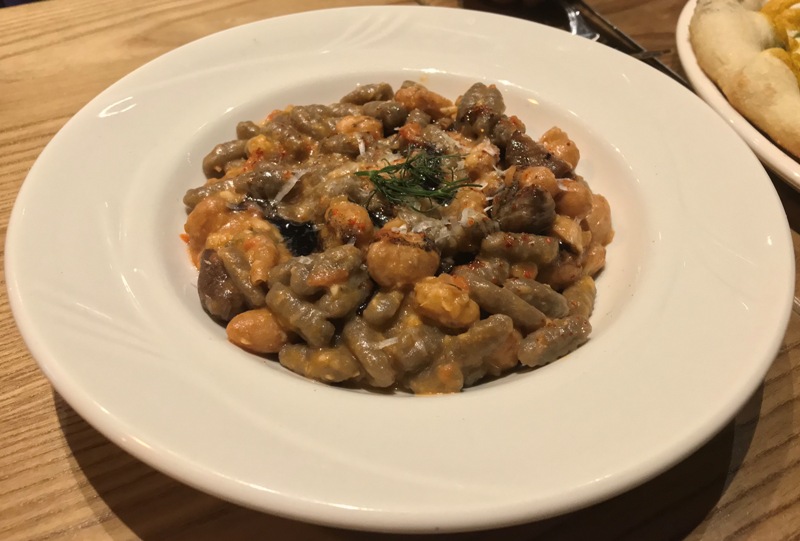 Pasta, on the other hand, shined that night. A cavatelli ($17) mixing white bean with roasted chestnut, tomato and a black garlic oil was a smooth and well-textured dish that could’ve benefitted from a pop in colour for the eye, but when considering the kitchen’s autumn inspirations, it did more than the trick. Papardelle ($23) with a rabbit ragout, shallots and romarin fared even better. With its soft noodles, slices of poached plum on top and meat stewed down to a soft and buttery consistency, it was the most welcome arrival at the table. Rita definitely didn’t pull any punches on the pasta front.

Sure, there were minor slips among the dishes that evening, but Rita’s got enough going on to merit a return visit. Even as a new kid on the block, even with its fresh look, it already felt like part of the family of restaurants that Verdun takes to heart. Nothing could’ve been more telling than having the tables packed before we were halfway through the meal — on a Monday night. Shrug off Italian as being none too adventurous if you want, but it’s hard to deny how satisfying it can be, especially when it’s done right. ■