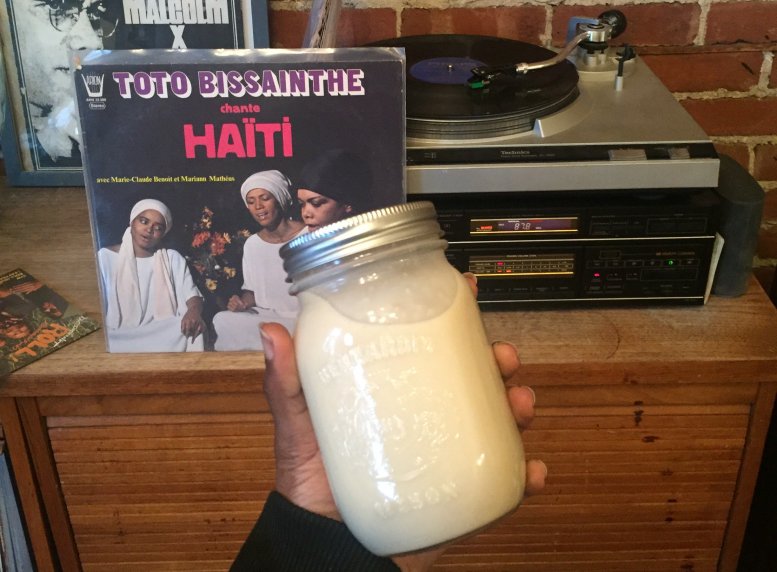 Following a whirlwind year in Brussels, Montreal’s own DJ extraordinaire Gayance has returned home for the holidays. To celebrate, she has a pair of events coming up at Mile End record store la Rama: tonight (Tuesday) she’ll be spinning kompa, rara, tropical and brasiliero with Glowzi at a very special 5 à 8, followed up by a Haitian Christmas party this Wednesday, where the kremas will be flowing.

Never had kremas/cremas/cremasse, the creamy and sweet Haitian yuletide favourite that’s a little bit like egg nog but not really? Don’t sweat it: come taste it at la Rama Wednesday, then try to faithfully recreate it at home using Gayance’s family recipe. It’s a hit among her friends and colleagues (she made 6.5 litres already and it’s all gone), and although she left a few secret spices out of this version to keep things in the family, feel free to tinker with your own any way you choose.

Gayance says some like it thicker and creamier, while she opts for a bit more drinkability. And make sure it’s nice and chilled.

Recipe for about three 40 oz bottles of kremas:

2. While the rum and coconut milk is sitting, heat three packets of Carnation milk (follow packet instructions) on the stove on low. Add cinnamon, vanilla and nutmeg.

3. After two hours, add the two boxes of sweetened condensed milk to the heated milk. Then add coconut rum mixture to that and mix thoroughly. After that, add a half cup of brown sugar. Mix thoroughly otherwise the alcohol and sugar will stick.

It’s hard to explain exactly how it should taste if done right. “It should taste like Christmas with the spices,” she says. “But there are so many spices melting together, you’ll need a coffee filter or cheese cloth to drain it all out.”

One final piece of advice for rookies: If it’s your first time drinking kremas, don’t go overboard — the booze mixed with the sweetness can be a little hard on your stomach if you’re unaccustomed. ■