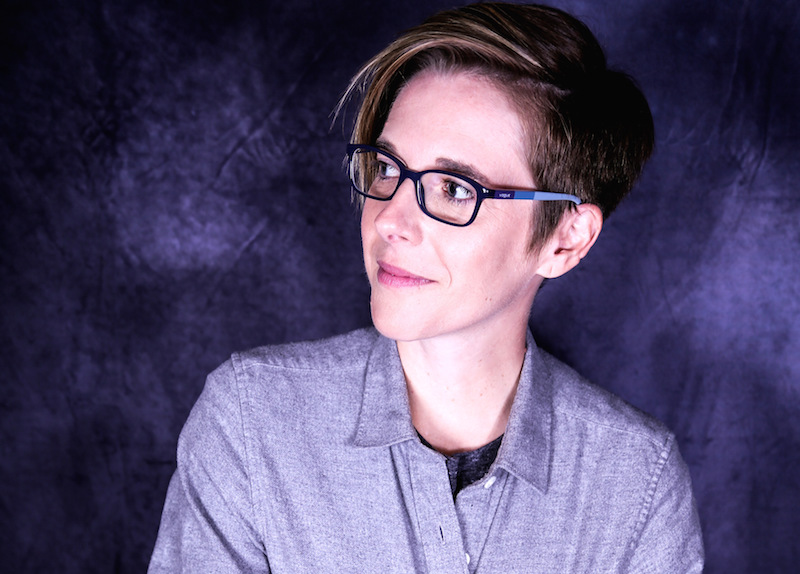 It’s always a pleasure to talk or otherwise spend time with comic DeAnne Smith for reasons including but not limited to that they are a made-in-Montreal success story and that they don’t live here anymore. And, while some people get crotchety and complain-y when any Montreal performer leaves town — especially when they abscond to New York, Los Angeles or Toronto — here’s a counterpoint: people are allowed to move wherever they want and no one owes you anything.

It’s also a pleasure when DeAnne comes back to town to hang with all us little people, which they will be doing tomorrow night (Dec. 4) at MainLine Theatre for a show appropriately named DeAnarchy. Given all of this, I recently asked them a few questions about things like comedy and geography. These are their stories. [insert Law & Order sound]

Dave Jaffer: Hey, you’re back in Montreal! For how long? And why?

DeAnne Smith: I actually came into town to read a story for Rainbow Story Hour at Drawn & Quarterly, put on by Queerest Little Ledo Productions. It’s a super-inclusive, queer-tinged storytelling event for little ones and their grown-ups. I have some shows in New York at the end of this week and when I listed the dates online, folks in Montreal were bummed that I wasn’t doing a show here. I’m nothing if not a people-pleaser! So I decided to stay an extra day and put on a show!

DS: I live in Toronto now, but with comedy, I’m always all over the place. I spend a significant chunk of the year in Australia and in L.A.

DJ: Hey, you’re back in Montreal! I’ve seen you perform a couple times in 2018. What’s different about this show?

DS: For DeAnarchy, I’ve invited my favourite Montreal funny people to join me for a night of experimentation and chaotic fun. You’ll see all-new material from me, as well as music from Leighland Beckman, stand-up from Keith Waterfield and Mike Carrozza and sketch from Nightmare Slags — Lise Vigneault and Deirdre Trudeau. For me, this show is about getting in touch with my Montreal comedy roots. I started comedy here, and every show felt like such a discovery. There’s something very special and electric about the energy in this city. I’m so looking forward to seeing a Montreal audience outside of the comedy festival and also getting to watch all my friends perform!

DJ: You told me that this all came together at the last minute. Is that good?

DS: Totally! I contacted MainLine, they had a space for me, and my friends all jumped in without hesitation. I love a spontaneous and somewhat haphazard show, honestly. And everyone’s willingness to make it work really reminded me that I still have deep connections here that I want to maintain. I can’t imagine another place I could pull this off all last minute based on audience demand.

DJ: If you feel qualified to answer this, how is comedy doing these days? I myself am pretty stoked — this year’s New Faces show at Just for Laughs was the best I think I’ve ever seen — but I’m a consumer not a producer, so I’m interested in your take.

DS: I think comedy is in a boom period. There are more comedians than ever, and the quality is the best I’ve seen! I’m super excited about the direction comedy is going in. And I get to be exposed to the Australian scene — that place breeds amazing comics. Hannah Gadsby is the most recent well known example, but I’d urge your readers to look up Rhys Nicholson, Zoë Coombs Marr, Demi Lardner, Dane Simpson, and I’m stopping myself here, because there are so many more unique and hilarious comics I could name. And that’s just one country!

DS: In Canada, they’re starting to get recognition, but Chanty Marostica is hands down the funniest person I’ve ever seen. They’re incredibly energetic and spontaneous, a tornado of sneakily smart and hilarious stuff. Chanty’s from Winnipeg and now in Toronto, but got their start in Montreal!

DS: The festival aside — because that is such an aberration in the actual day-to-day comedy scene in Montreal — I think like any scene, it goes through phases. It’s a great place to learn and grow and get better when everyone is pushing themselves and there’s a friendly spirit of competition. But scenes can get lazy and start to atrophy in terms of quality. I haven’t been around enough lately to know where Montreal is at right now but I have no doubt there are plenty of hidden gems hitting up the open mics and comedy shows.

DJ: What’s ahead for you? What is 2019 going to look like? Are you in the next Mission: Impossible movie and I don’t know about it? Like, gimme the happs.

DS: Oh buddy! Today is the first day I can officially talk about the happs! My half-hour Netflix special, which I taped at Club Soda during JFL 2018, debuts on New Year’s Day as part of COMEDIANS of the world, a global, first-of-its-kind comedy series on Netflix. It’ll drop in every market simultaneously! I’m so excited. When I started comedy in Montreal in 2006, I never could have imagined having a special for literally everyone — with Netflix — in the world to see! ■

DeAnarchy is at MainLine Theatre on Dec. 4. Tickets can be purchased at mainlinetheatre.ca and/or by calling 514-849-3378.