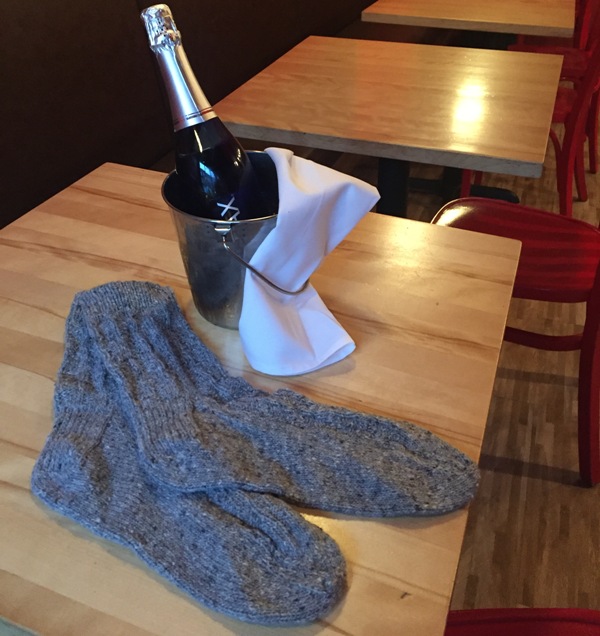 For the fifth year running, Socks for Bubbly (Bas Pour Bulles) allows patrons of participating restaurants to exchange a pair of usable socks fit for donation for a glass of bubbles. The charity event started as a homegrown operation with six restaurants across Montreal — with founder David Ferguson personally doing PR as well as sock deliveries — and now involves 18 restaurants here and 14 in Toronto. With the involvement of the communications company Bookmark, it’s showing increasing traction with restaurants for its simple message and simple exchange, and simple things often are the most extraordinary and meaningful.

Six years ago, Ferguson — the chef and owner of Petite-Patrie restaurant Gus — was listening to a documentary about the homeless on CBC Radio’s The Sunday Edition. The cross-generational exposé included both young and old people, and revealed how much they love their socks. “It wasn’t really anything indicating the need for socks, but they’re just these very impassioned speeches about how it made their day better and how they cherished putting on socks,” he says. That radio program was the original spark for Socks for Bubbly.

With a restaurant, Ferguson was used to receiving requests for charity events but hadn’t considered starting an initiative of his own. “When I heard this program, I thought, I’ve never given socks,” Ferguson says. “I can’t imagine very many people do because they’re not seen as something valuable. Your socks, generally you wear them until they turn into rags.” He called up the director of the Old Mission Brewery Matthew Pierce who confirmed that, yes, it’s not only an important item but one that isn’t received nearly as often as required. Ferguson could have raised money but opted for a more direct approach: By acquiring socks from his and other restaurants, it would become widespread form of community involvement for both business and clientele. “Clients really want to feel like they’re participating, you can see it when they come in with socks. On top of that, I wanted it to be a conversation starter, get people talking about it and (raise awareness) about problems of the feet.”

To understand the gravity of feet health for the homeless, it’s worth noting that the Old Mission Brewery needs approximately 50,000 pairs a year, all the more important when it’s cold and/or wet outside. “When they can’t go out and walk in the streets — because they get trench foot, their feet get filled with ulcers and pains and aches — to see friends and have their own autonomy and self-determination, then psychologically they become defeated,” Ferguson says. Without the use of their feet, people suffering from homelessness lose mobility, thereby losing their sense of agency which in turn affects their mental health. It all crumbles down from the simplest thing.

As Ferguson explains, it’s white tube socks that are actually the best thing to donate. “When people go to the ER and they’re starting to remove the shoes and the socks, and there’s all these sores, they can see through the white socks exactly where the ulcers are,” he says. “That’s how bad it is. About 80 to 90 per cent of the reasons why homeless people end up in the ER is because of their feet. It’s crazy.”

Considering the incredibly slim margins at restaurants, it’s at once amazing that restaurants are plugged so often for involvement in charities, but also unsurprising. There’s the undeniable benefit of getting the name of one’s business out into the public with a positive message, but the connection between restaurants and their communities shouldn’t be underestimated. “We’re very intimately related to the community,” Ferguson says. “That’s one of the reasons why I started this: I benefit greatly from the city of Montreal and I want to give back to the city of Montreal. We are often approached by clients… We’re deeply ingrained, and people feel comfortable coming to us, and everyone likes to eat.”

As for restaurants aspiring to launch their own charities? Ferguson says that no good and well-intentioned idea is worth putting on the back burner. “Never underestimate the willingness of others to contribute. Don’t be shy and don’t be nervous to ask people to give. Humans by nature are generally good people they want to see and do good deeds, and people step it up in ways that you’ll just be blown away by. If you can see how or feel that it’s made a difference, the reward is priceless.” ■

There’s a limit of one pair of socks per glass of bubbly per visit. The event ends on Nov. 25.

If you miss out on visiting a restaurant now, you can find the donation page for the Old Mission Brewery here.