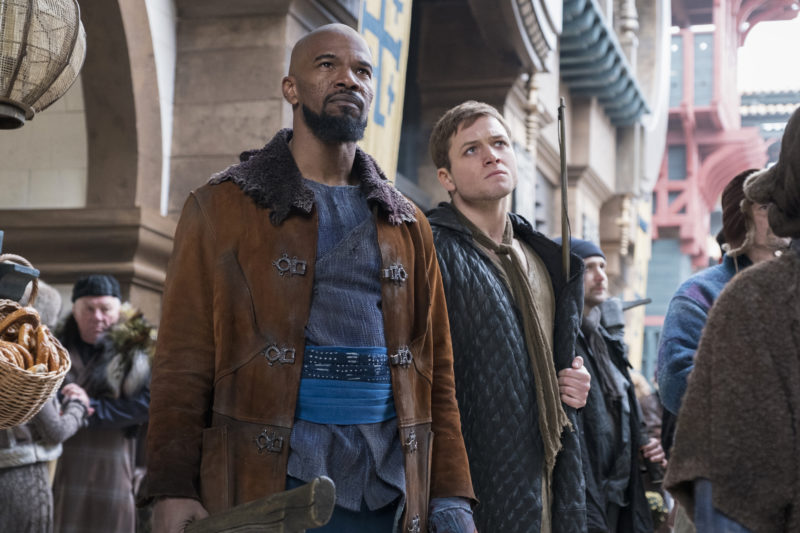 I can just picture the awkward silence that prompted the studio executive to say, “I mean, we could always do a Robin Hood origin story?” After the disaster that was Guy Ritchie’s King Arthur, it’s a wonder why anyone would pounce on the idea of making an expensive “hip” revamp of the classic tale.

Otto Bathurst infuses the reboot with modern sensibilities as if to justify its existence, but it’s a hotchpotch of anachronisms and political misfires. With Taron Egerton as Robin (or Rob, with his mates), the film feels like it belongs more in the Kingsman universe than the Middle Ages in which Robin Hood is (I guess?) set. The main problem with Robin Hood — though, trust me, there are many — is that it wants to be a fun, entertaining family affair, but never stops fighting with the source material. It wants to provide socio-political commentary but it’s either so blunt or so half baked that the whole film feels like a LARPing session run by a bunch of Bernie Bros.

Robin Hood is Robin of Loxley, a Nottingham nobleman and a veteran who has just come back from the Crusades in “Arabia” to find his town under threat by a corrupt despot and, worst of all, his beloved Marian with another man. Once home, he joins forces with Little John (Jamie Foxx), an Arabian man who lost his son despite Robin’s attempt to save him. He’s credited as Little John but introduces himself with his Arabic name Yahia. There’s a running gag about how his name is unpronounceable to white people. Hilarious.

Eve Hewson plays Lady Marian, a blue-eyed Irish lass who is also a peasant despite her photoshoot-ready make-up and enviable wardrobe. She’s portrayed as the driving force behind Robin’s charity. In fact, it starts to feel like Robin couldn’t give a toss about redistribution of wealth and really just wants to impress her. In any case, he takes his social justice cues from her.

Ben Mendelsohn plays a sheriff who appears to have as much power as a president. The Trump references will have any audience member that hasn’t been living under a rock for the past two years roll their eyes. It’s only the fascistic ideology that is Trump-like — his rhetoric is more like a bad adaptation of “Richard III” and his outfit, with its plastic leather sheen, feels more like something out of  the Star Wars film he recently starred in. It turns out that he’s in cahoots with the Catholic Church, at whose hands, he reveals, he was abused as a child. This sad attempt at humanizing (or maybe even forgiving) a villain is so misplaced it’s borderline offensive. Though Mendelsohn is a fine actor, the sheriff is made up of too many clichés for anyone to care much what he does. He calls for Robin Hood to be killed and for his blood to fill the streets and for the rats to drink his blood yada yada yada. After Killmonger set a new standard for villains in action and superhero movies, the Sheriff misses the mark by a long shot. Tim Minchin as Friar Tuck just about salvages the few scenes he’s in. Maybe next time, they should ask him to actually write the script.

With weak dialogue (upon discovering a bag of coins left to her by the hooded Robin, Marian proclaims, “I’m flattered, but I wish he would give it to the people.”) and a narrator who states at the beginning that he “can’t remember what year it was,” the film flounders and flails with confidence but never sets its feet on the ground. I wouldn’t be surprised if the filmmakers hadn’t even seen the other Robin Hood films. They’re more interested in borrowing (or rather, stealing) from Marvel and Kingsman films than breathing new life into this origin story.

What’s so disappointing about Robin Hood is that it acknowledges the inherent saviour narrative written into the tale but doesn’t do anything with it. Robin Hood is not a democratically elected official. He is a self-appointed hero who gains the trust of the “people.” But after so much talk of “the people,” you begin to wonder who “the people” are. They’re not depicted in any three-dimensional way besides through hundreds of extras. I’m not saying they should’ve written in a meet-and-greet after a Nottingham Town Hall meeting, but representing them as a faceless mass doesn’t illuminate their cause much. The sycophantic film has no interest in the very people that the heroes claim to care about. It can’t help but reproduce the very ideologies it purports to critique. ■