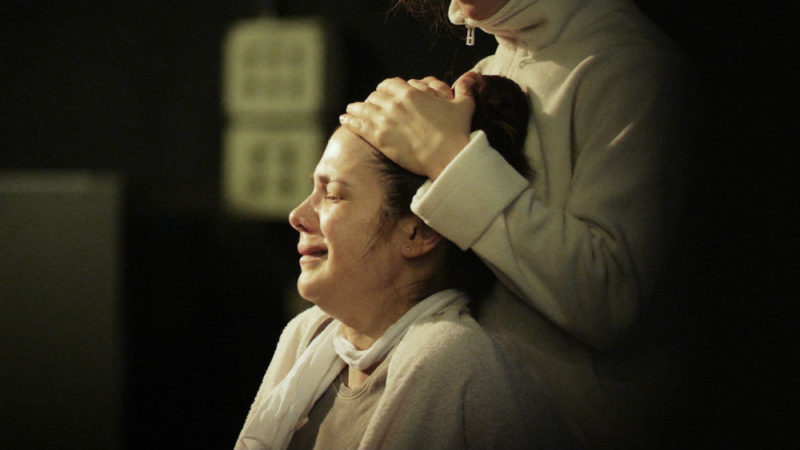 Under a thematic section titled “artifice,” Srbenka depicts the extended rehearsals of a play based on true events that took place in Crotia during 1991. Helmed by theatrical director Oliver Frljic, the play is constructed from a script but also peer input and improvisations, and actors are actively encouraged to discuss their own feelings and relationship with the material as they work their way towards opening night.

An intimate and often difficult film made under the shadow of renewed political unrest in Croatia, the rehearsal process varies from extreme close-ups that capture minute gestures and off-screen action that is sweeping and large. The ongoing dialogue between actors, some children, and the director are a fascinating negotiation of agency and power as not all players are comfortable revealing so much of themselves on stage.

The film works as a portrait of the acting, in particular as it focuses on the lines of artifice we draw in performing in life and in art, but also as a harrowing vision of political violence. The film’s focus on its child performers, who were born over a decade after the subject had died, shows the lasting effects of trauma and violence on individuals and society. The repetition of actions on stage with the repetitions of history might be a bit blunt of a metaphor, but it is no less effective. (Justine Smith)

My Father Is My Mother’s Brother 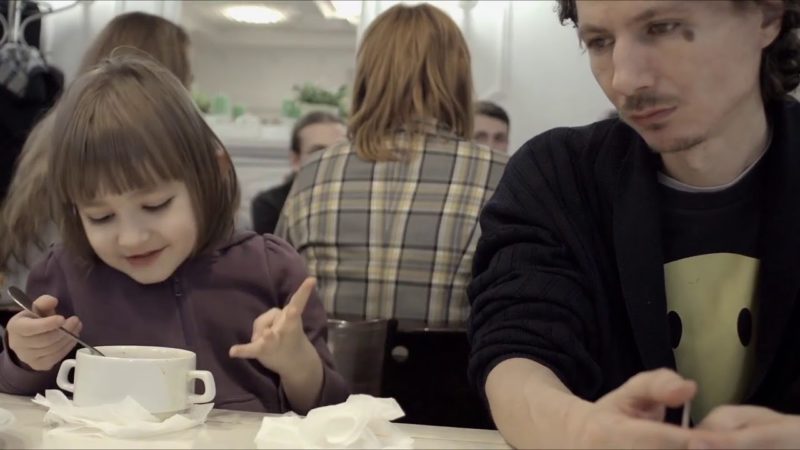 Vadim Ilkov’s intimate documentary My Father Is My Mother’s Brother follows the daily tribulations of Tolik and his niece Katya. Katya lives with Tolik and calls him Dad, but she’s only there because her mother’s mental illness makes it impossible for her to care for her daughter. Tolik is a free-spirited painter and musician (he’s better at the former but invests way more time in the latter as he futilely tries to work out falsetto club bangers) who cares deeply for his niece, but he doesn’t really have the kind of lifestyle that facilitates child-rearing.

All documentary film is voyeuristic to some extent, but I can hardly think of a more appropriate term for what Ilkov is doing here. From sequences of Katya throwing a temper tantrum because she can’t play cellphone games to a truly unsettling sequence of her mother having a disjointed, one-sided conversation with a TV screen, Ilkov plants the viewer in the middle of the action and doesn’t blink. Sometimes, there’s not much going on: there’s a lot of Tolik making his demented karaoke jams without as much as a peep from Katya, and the film sometimes feels like Tolik traded absolute access to every aspect of his daily life in exchange for disproportionate exposure of his creative endeavours.

But My Father Is My Mother’s Brother is also a celebration of creativity and the artistic spirit. Despite living difficult and sometimes downright miserable lives, Tolik and Katya are adaptive and continue to create no matter what the circumstances may be. It’s a pretty bleak film made bleaker by the squalid living conditions the protagonists must endure, but there’s also enough hope (and humour!) to balance it out. (Alex Rose) 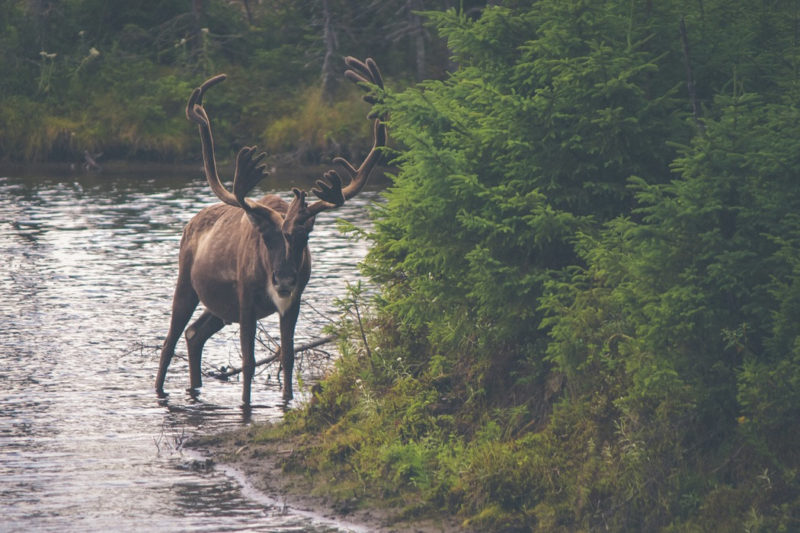 A collaborative cinematic enterprise, blending the conception of Emma Davie, the images of Peter Mettler and the philosophy of David Abram, Becoming Animal is a reflection on the natural world and humanity’s place within it. Largely shot in the Wyoming wilderness, this audiovisual essay blends narration and tangents that question humanity’s displacement from the animal world. Are we only human in relation to the world around us? What compels us to divide ourselves from nature? Is technology further alienating us, or does it offer new possibilities to connect the threads we’ve lost?

More of a meditation than a scientific thesis on the environmental crisis, the film nonetheless offers a very cogent philosophical argument for renewing our spiritual connection to the earth as a political action. With a wide variety of images that play on the textural qualities of the cinematic image as well as nature, the movie is a rich audiovisual product. Its intimacy with animals, with extended shots of antelope, bison and moose, are especially powerful in the context of Abram’s musings. In general, the power of his reflections has a tremendous transformative effect on the images as they elevate what might be otherwise mundane outdoor visuals by realigning our view of the world and our place within it. (JS)

The Image You Missed 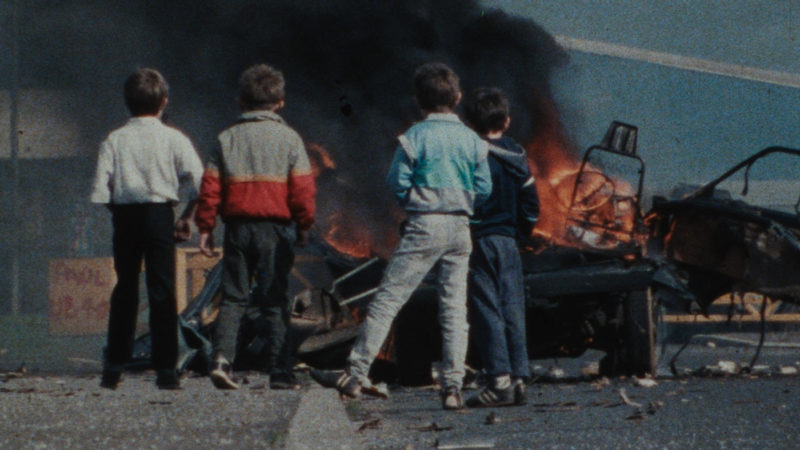 The Image You Missed, directed by Donal Foreman, is introduced to us as a film between two men: Donal Foreman and Arthur MacCaig. Son and father. Estranged and tied together not by the bonds of family but by the father’s archive, a life’s work documenting the struggles of the IRA. MacCaig, originally from New Jersey but of Irish heritage, discovered filmmaking first in Belfast and later in France, and his son returns to these places to trace the man his father was and parce through the tapes and notebooks he left behind — this dead documentarian whose entire life was absorbed by the potency of one politically fraught epoch.

The film nimbly skirts the balance between an investigation of the IRA in the late ’70s through to the late ’90s, an exploration of documentary filmmaking itself and of the relationship between father and son. If we do sense a slight whiff of self-indulgence on the part of Foreman, it is tempered by his self-knowledge. He envies his father’s self-assuredness, his clear vision for his place in a political struggle. Foreman, in the wake of his cinematic heritage, feels lost; one camera amongst many at Occupy Wall Street; a young man with an aimless political will.

With a sound design whose emotional tenor creeps up on you without your noticing, this film serves as a testament to the power and beauty of archiving. It exists, interestingly, on the outskirts of war rather than within it. The Image You Missed is tremendously edited, but it also rises up out of the strength of MacCaig’s films. Foreman’s newer footage is a harmonious addition, but lacks punch. This may be a conversation between two filmmakers, but the dead man’s place in political history also gave him the stronger cinematic voice. (Nora Rosenthal)

“Coasters” is the self-appointed name for people who live in the remote region of Basse-Côte-Nord, so far past Sept-Îles that roads don’t actually reach it. What were originally settled as fishing villages (and one displaced reservation, Unamenshipit) are now seeing their numbers dwindle as children increasingly grow up and move away. Now mostly made up of teachers, fishermen, retirees and the children of either teachers or fishermen, the region is stagnating.

Directors Nicolas-Alexandre Tremblay and Stéphane Trottier cast a wide net, following a good dozen coasters in their daily lives. Some, like crab fisherman Jeremy Cox, have about the life you’d expect; others, like Burundi-born refugee and Army vet Dieudonné Uzubahimana, have followed fairly unusual roads up to the coast. One thing is certain: everyone sees their home with pride, though none more than the retiree who remains, with his wife, the sole inhabitants of a small village that was willingly demolished when business moved elsewhere.

Fairly straightforward in its presentation — lots of drone shots draped with composer Robert M. Lepage’s guitar-based soundscapes, fly-on-the-wall approaches to most events — Les Coasters also gives the feeling that nearly any of its stories could be its own feature. At 83 minutes, it packs a whole lot of information in a short amount of time, though it left me wanting to see more of many of its characters, like First Nations activist Baudoin Lalo or the teenager with the unfortunate chinstrap who moves into rez at John Abbott and marvels at the very idea of the metro (“it’s like the future, almost”). Being left wanting more is certainly the best outcome for this type of situation, though. (AR)