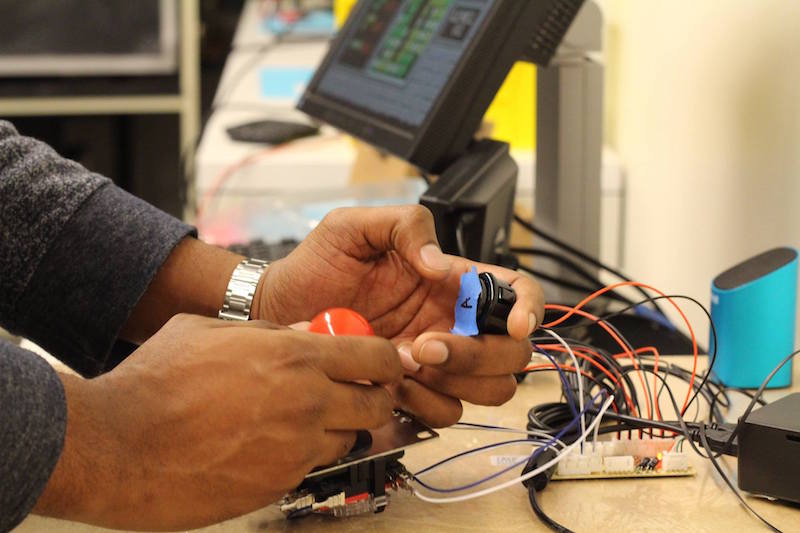 Théo Chauvirey believes that the future of bio design lies in sustainable architecture. The grad student in the Master of Design (MDes) program at Concordia University has spent the past year growing a mix of mycelium and hemp fibre into compressed moulds to create a prototype for an eco-friendly alternative to the current seat design on local public transport. He calls this Project MR-30.

Chauvirey is a maker, part of a community of people who love to build and thrive from experimenting on their own creations. Made up of a diverse group of students, artists, educators and everyday people, they are growing a tight-knit community through shared makerspaces and events such as the Montreal Mini Maker Faire (Nov. 16–17).

The idea for Project MR-30 came to Chauvirey when the STM put out a call for ways to reuse the seats in metro cars they were replacing. He was interested by what would happen to the materials, most of which must be disposed of through burning or chemicals, creating lasting toxic byproducts. “Recycling is a solution, but it’s not the solution,” he says. Chauvirey seeks to show the STM that if a student with a limited budget can create durable seats out of cheap materials, they too should consider cost-effective biodegradable infrastructure. Chauvirey’s mycelium roots weave across the hemp fibres to create a strong but lightweight material, currently used as a packaging alternative. The mushroom spores die when cooked, leaving a finished product coated in the white velvety finish of the root.

Project MR-30 will be displayed at the Montreal Mini Maker Faire, a science fair/talent show hybrid which doubles as an opportunity for makers to have a show-and-tell. “I wanted people to see, to have at least a glimpse of what it could look like in the future,” Chauvirey says.

The Maker Faire will showcase Montreal’s maker landscape, its creative approach to experimentation and problem-solving and its values. The community is committed to sustainability and inclusion: shared spaces produce less waste and offer the option of a membership, which makes accessing tools and other equipment vastly more affordable. Makers’ labs show that if people are provided access to tools, they are able to come up with creative solutions. While students at the university have access to labs and other spaces for creating within the program, there exist shared labs across the city that house a range of tools from sewing machines to digital printing technology.

Makers use a variety of tools for their projects, but the main component is curiosity. “Project Bucci” began as an experiment for fun — Chauvirey used two small plastic swimming pools to grow enormous SCOBYs which he then dried out and fashioned into a dress.

It started with the question “let’s see how big this can get,” Chauvirey explains. While the bacterial culture grows into a strong leathery material (not unlike PVC) he had the idea to moisturize it with Vaseline to keep it from sticking to the plastic as it dried and to maintain suppleness. He inlaid a 3D-printed design between layers of the SCOBY for additional structural integrity, similar to the weave in a tarp. With a non-petroleum-based moisturizer and a waterproof lacquer, the large bacterial culture could make a sustainable and biodegradable replacement for cotton- and plastic-based structural coverings able be mended by adding culture to grow over a tear and easily compost when no longer necessary.

“Some [makers] are members from the community who have impossible challenges like making a rocket or making a robot, and others are people who like to upcycle, recycle and create,” says Ann-Louise Davidson, a faculty member at Concordia involved in the planning of the Maker Faire. Davidson recently led a youth group at Maison des Jeunes Côte-des-Neiges, who had the idea to use a 3D printer to create a dragon costume designed to fit over a wheelchair, which a member of its community had the opportunity to model on Halloween.

The maker mentality relies on thinking outside the box and using materials in an unusual and ingenious fashion. The Montreal Mini Maker Faire is a great opportunity to see what people are working on, and for those who would like to get involved in the community, to ask questions and get inspired. ■