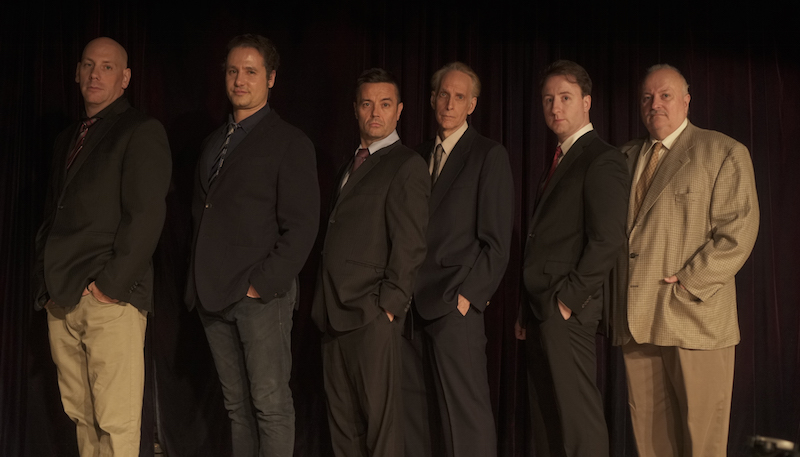 David Mamet’s Glengarry Glen Ross is a brutal and brilliant piece of theatre. It is also a hyper-masculine work written by American theatre’s pre-eminent hyper-masculine writer. Well before his well-chronicled right-wing turn, Mamet’s writing, perhaps epitomized by Glengarry Glen Ross, was very concerned with what it is to be a man and what it is to be worthy (or unworthy) of being called a man.

I do not write this to be complimentary. With age I have found it hard to find a place for Mamet’s work in the contemporary context that we live and work in. Not because of the slurs, swears and Mamet speak but rather the cynicism of the worlds he creates and the limited nature of manhood he endorses. The salesman of Glengarry Glen Ross are conniving, aggressive, petty, vicious and flagrantly self-interested. In a certain reading, they are all avatars of masculinity; in most readings, they are mostly irredeemable.

The universe is absolutely indifferent and people can be beastly, but in Mamet’s work there seems to be an insistence that if you’re not victimizing someone you’re about to be victimized yourself. Glengarry Glen Ross is largely about a bunch of nasty losers competing to make sure they don’t lose some more while vacillating between self-pity and self-aggrandizement. It is compelling, but it sure ain’t pretty.

This why Acts To Grind’s production of Glengarry Glen Ross (opening tonight, Nov. 7) is so interesting. In some way, it has to make toxic masculinity simultaneously palpable and relatable.

I recently spoke with the play’s director, Acts to Grind’s Artistic Director Davyn Ryall, about this very thing and much more.

Dave Jaffer: Why this play? Why now?

Davyn Ryall: The play was selected by the members in the company. They were particularly fans of David Mamet and this particular play and they proposed it to the company to be produced. That’s basically how it was selected. I think it’s more specifically because they were looking for a good vehicle [for] male actors to represent within their age categories — 30s, 40s — [and] real-life characters. It’s a dramatic, dialogue-driven, character-driven play and challenging to say the least. That was our professional reason for choosing the play. I had to discern, as Artistic Director, whether it fit with the mandate of the company, which it does.

DJ: The most famous scene from the 1992 film adaptation is not in the original text. Are you using the Alec Baldwin scene from the film in your production?

DJ: If this play had something to say in the 1980s when it was first produced and in the 1990s, when the film adaptation came out, what do you think that thing was? What was this piece of writing trying to communicate within its first decade of existence?

DR: I believe it was influenced by his own experience of working in the real-estate business and witnessing the harsh business world , how it can be a very backstabbing, very cruel world. Most people think, “oh, it’s business” on the surface, but there’s so much going on between the personalities and egos. [I’ve] been in the big business world and [experienced] some of the cruelties and [witnessed] the enormous amount of bending over and brown-nosing and ass-kissing that has to happen in order to survive.

DJ: I am wondering how this play is going to fare in a 2018 context. It is not a genteel play. People generally don’t say “Polack” and “faggot” and “cocksucker.” In 2018, those words are jarring; in 1980s Chicago they are not. Mamet speak is very profane, rough-hewn, and inherently hyper-masculine and this is play is about masculinity and what people do with it. The world in 2018 is decidedly less interested in that.

DR: The question of language, first of all, I disagree that it’s not spoken that way in certain businesses because it is today. It really depends on the environment you work in, and sales environments can be really crude off-script. When you’re off the record it can be very, very rough. One of my actors’ parents’ work in an industry that is very similar to this one and the language spoken is exactly the way they speak to each other [in Glengarry Glen Ross]. The truth of their personalities surfaces when they become very familiar with each other and they’re less censored and less careful in terms they use. Do they use prejudicial comments like “Polack” and “chink” and the way they refer to the Indian community in the play? No, not so much, because it’s not considered PC. But the crudeness of the language is still very common.

DR: I think the animal instinct kicks in as well, because [the salesmen] are really being put on the spot, here. They’re in a period where the financial climate is not stable. It’s pretty rough. They refer to the good old days versus the current days, and that could be applied to pretty much any period in time. It’s the case where people are looking at having a job or being on the food line. And this is what these guys are living with in this particular situation. The longer they’ve been comfortable in their jobs, the more risk they have — like in the case of [the character] Levene. These guys have been working together a long time, but they don’t like each other. ■