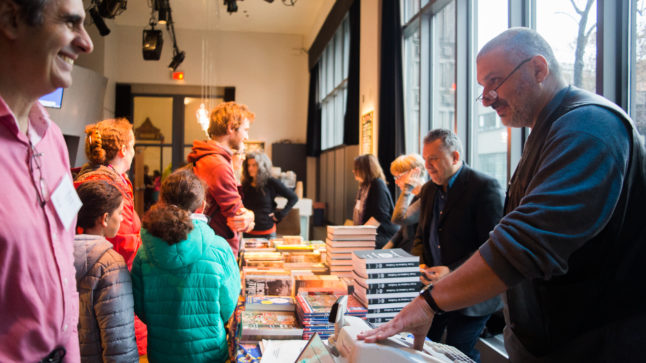 Literary-minded Montrealers probably already know that the Salon du livre de Montréal runs at Place Bonaventure from Nov. 14–19. What they might not know is that this year’s edition features something that the Salon hasn’t for quite a while: Anglos.

“We are presenting our books and writers there for the first time in many years” says Anna Leventhal, Executive Director of the Association of English Language Publishers of Quebec (AELAQ). “We will be at Stand #753 with a sample of our members’ books along with some other books from Quebec Writers’ Federation members — and we’ll be presenting four events as well.” (In various press releases, Stand #753 has been referred to as the “Get Lit” stand.)

Though the “many years” quip seems like it refers to a big deal, it isn’t, and Leventhal is quick to quash any suggestion that there’s something deeper and more nefarious afoot.

“The Salon du Livre is a very, very big event in the Francophone book world,” she says. “It’s not so much a space for Anglophones or English-language books and writers, but this year the Board of Directors and the new Executive Director, Olivier Gougeon, [have] all been very active in wanting to bring in English books and publishers and writers. I think that their interest is to reflect the diversity and the breadth of literature being created here in Quebec.”

Later, she adds: “It wasn’t so much that we were banned from the Salon du Livre — it’s just that it was this thing that happened and we weren’t a part of it.”

Again, this isn’t some great injustice. English-language publishers and authors aren’t the big draw in this market for a very obvious reason. In discussing this, our conversation rubs up against the idea that Hugh MacLennan’s Two Solitudes is still relevant to discussions of Quebec’s English- and French-language literary scenes.

“That’s a trope we’ve been fighting for the past however many years it’s been,” Leventhal says. “People think of it as being two separate spheres and never the twain shall meet, but I think what we’re seeing more and more of are, first of all, translations — for instance, we’ve seen Eric Dupont’s Songs for the Cold of Heart (the 2018 translation of 2012’s La fiancée américaine) on the Giller shortlist and it’s come as a shock to much of English Canada that this book even exists. They’ve never heard of it, but it’s been a huge bestseller in Quebec.

“The walls haven’t fully broken down but there is more passage, back and forth. A lot of our members do translations from French into English, and there’s a lot more [French-language] Quebec publishers who are looking to local English-language writers and writing and translating their work.”

As for the English-language publishers in Quebec, Leventhal says that because they “don’t have the attraction that Toronto-based publishers do and Vancouver-based publishers do,” they’re not nearly in as healthy a place. They struggle, and have been struggling — which is perhaps a reason that Stand #753 means a great deal.

“The Quebec French-language book industry has really created something amazing for itself, and on the English side we haven’t quite gotten to that level,” Leventhal says. “We don’t see people buying 60,000 copies of a book by a local writer. Maybe if it’s Heather O’Neill — but she’s not published in Quebec.” ■