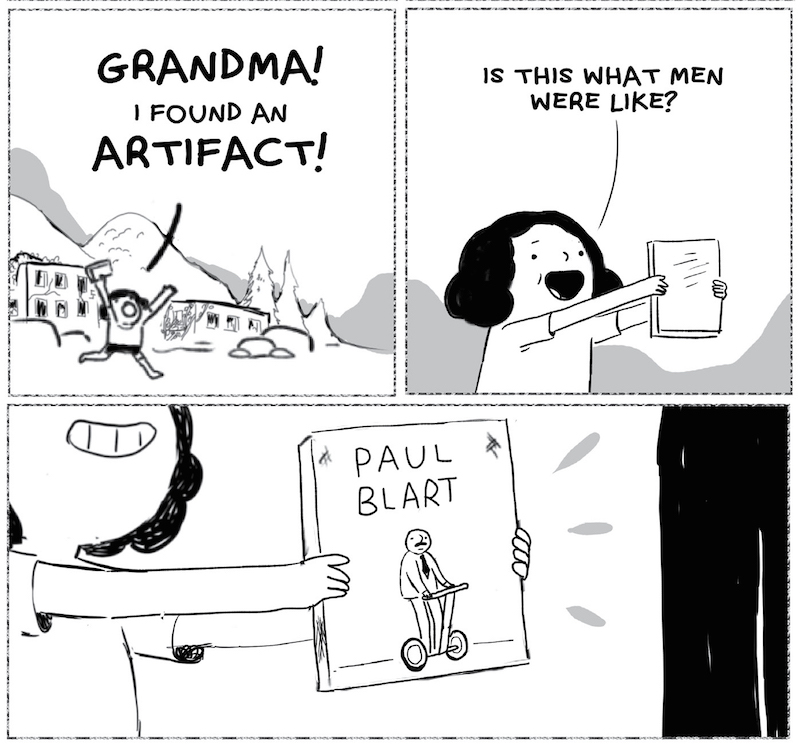 Every now and again, a piece of art is so universally celebrated it’s almost suspect. This has largely been the case with Aminder Dhaliwal‘s debut graphic novel Woman World, a wonderful little tome adapted from her popular Instagram comic about an actually-pretty-pleasant post-apocalyptic world where men have gone extinct and women have to, you know, recreate society.

As suggested, Woman World has received copious praise. It has been hailed as a “genius mixture of science fiction, humor, drama, and philosophy” (Blogcritics), a “remarkably sly and devastating critique of patriarchy” (NPR) and “both powerful and hopeful” (the Mary Sue). And, not that celebrities are the be all and end all of whatever, but Woman World‘s back cover is adorned by blurbs written by comedy heavyweights Tig Notaro and Aparna Nancherla.

As I needed to go in for my own exploration and not rely on the impressions of others, Dhaliwal was kind enough to answer some of my questions via email while visiting her mother in her hometown of Brampton, Ontario.

The following interview has been lightly edited and condensed for clarity.

Dave Jaffer: As basic as this question is, it still feels worthwhile to ask. Where did this idea come from and what prompted you to keep coming back to it, day after day and week after week?

Aminder Dhaliwal: The initial idea for Woman World came from the Women’s March in 2017, there were so many “The Future is Female” signs, that I thought, “huh, what if?” Pretty soon after the march, I drew up the first comic. But after the initial excitement of the idea, I got nervous about posting it online. However, a few friends gave me all the confidence I needed and I decided to post on International Women’s Day. The reaction was really great and by that point I already had a few ideas for more comics so I just kept going.

DJ: Why did you take it offline? Was it as simple as knowing you wanted a book deal or was it something different?

AD: When I started posting I had no plans to do anything more with it. The idea to publish the work in print form came from realizing there was an audience. The entire comic is still up on my Instagram, save for the comics that were made for the book only. But if someone wished, they could go back through and find it that way. The interesting thing is how differently it reads on Instagram than in print form. Ultimately, Instagram is lovely for the instant connection and gratification of an audience and the print edition has been amazing for different reasons. In print, I got to decide every nuanced detail of the visuals. I got to realize the pacing through actual “breathing space” on a page. And ultimately, it feels like more of a cozy escape for the reader (especially when you know notifications won’t be popping up over the work).

DJ: What specifically made you go with Drawn & Quarterly?

AD: Um, ’cause it’s Drawn & Quarterly! They publish amazing stuff. They’re the gold standard, it was a really special moment to place the “D+Q” on the spine.

DJ: While this text seems like it has an overarching political point (or set of points) to make, you’ve repeatedly said that it’s not necessarily meant to be taken this way, that it’s “just a cute, tongue-in-cheek feminist comic.” It seems obvious that it can be both — and that it is both. Is it important to see it as both of these things?

AD: I’ve always described it in that manner because when you open with “so, its a comic where all the men have gone extinct…” there’s usually a moment where I can jump into the mind of the listener and instantly see the dark, morbid, Children of Men-style world they’re picturing, so I quickly add the “it’s cute and tongue-in-cheek!” not so much to tone down the feminism of the comic, but more so the science fiction element.

DJ: To what degree have you had to deal with men (or any people, I suppose) attacking you for creating this work? If they’ve complained or are complaining about something, what is it? How do you respond?

AD: Honestly, there hasn’t been that much backlash. When I posted the first comic, there [were] rude comments. It was because I had used the International Women’s Day hashtag. Like me, you might presume that someone who’s interested and happy about the day would be searching #internationalwomensday, but how wrong you’d be. Hashtags often work the opposite way, it’s a bunch of people with too much time on their hands searching things they’d like to be outraged at. Other than that, the most shocking revelation for me was the number of people who assumed that in the first comic, when the Mayor announces “The men are extinct,” that this meant the women had murdered the men. Obviously, I can understand how it could be misconstrued that way now, but at the time that was so completely not on my radar that I was shocked at how many people jumped to that assumption. It gave me a very clear visual of the state of feminism. My general approach to mean comments is to ignore them, I try to exclusively respond to nice people.

AD: I tried to celebrate some women blatantly (Beyoncé, am. I. right?) but mostly I wanted to create slice of life moments. I suppose, to me, that’s a sweeter celebration of women than anything specific.

DJ: Woman World is really, really funny, and for the most part its humour is both good-natured and universal. You don’t go for the throat though you very well could. Do you want to? Do you ever feel like you should? How would you describe Woman World’s humour?

AD: I’m not into mean comedy! I love me some silly and sweet, and I think that also describes Woman World.

DJ: NPR’s Etelka Lehoczky wrote that “Dhaliwal hasn’t just imagined a world without men; she’s imagined a world where everyone is Aminder Dhaliwal.” It’s not a broadside but I still don’t really think this is fair. Do you?

AD: Haha, I attempt to stay away from reviews, so this is my first time reading this. When I created the characters they all represented different facets of my personality, so they literally are all me. Yumi was my anxiety, Gaia, my lack of shame, Ulaana and Emiko would show up on my happy weeks, and Ina was my unrequited job-love. Biweekly I would make a comic based on how I felt.

DJ: One of the criticisms I’ve read about Woman World is that it’s “very binary.” You don’t seem like a person who wants to exclude or reduce anyone, so how do you parse this?

AD: I can respect that criticism, I mean, the book is literally called Woman World. However, when the concept of binary genders does pop up I generally frame it as ironic criticism. For example, there’s a comic about women’s razors, where the scavenger, Naomi, in need of women’s razors can only find “Men’s razors”  in the ruins, not realizing they are the exact same thing — a completely unnecessary binary system. Overall, I tried to create diverse characters and hopefully as I continue to revisit the world I can continue to expand on it.

DJ: If we put crafting the narrative on one side and creating the visual art on the other, which do you prefer? Which do you generally have to work harder at?

AD: Oh shoot, I’m not sure I can separate the two. Visual storytelling is all I do. Some comics start as big concepts and words and sometimes they start as a feeling – which is usually as art like drawing a character in a specific pose or expression. I suppose, between the two, I’m more anxious about my ability to craft a narrative, and making it relatable but new at the same time.

DJ: If it’s even fair to ask this, who is this book for?

AD: The comic started for me. I was going through a creative block and it got me out. As it continued on Instagram, it was for all the commenters who would tag their friends and share a really specific inside joke that I wouldn’t get. And when the comic delved into deeper issues it was for all the people who sent me private messages about how the comics resonated with them. So, who is this book for? Well, I suppose it’s for anyone who missed out on the chance to do that the first time, I hope there’s more people out there sharing jokes with their friends and connecting with the messages on a deeper level.

AD: I try to build diverse worlds in my own creations and diverse characters on shows I work on. I also try to make sure that a character’s entire identity is not wrapped up in their ethnicity, but instead is fully realized. In all honesty, it’s not something I try that hard to do, it just feels natural. As a consumer, I’m conscious of token characters and lazy writing or casting. ■