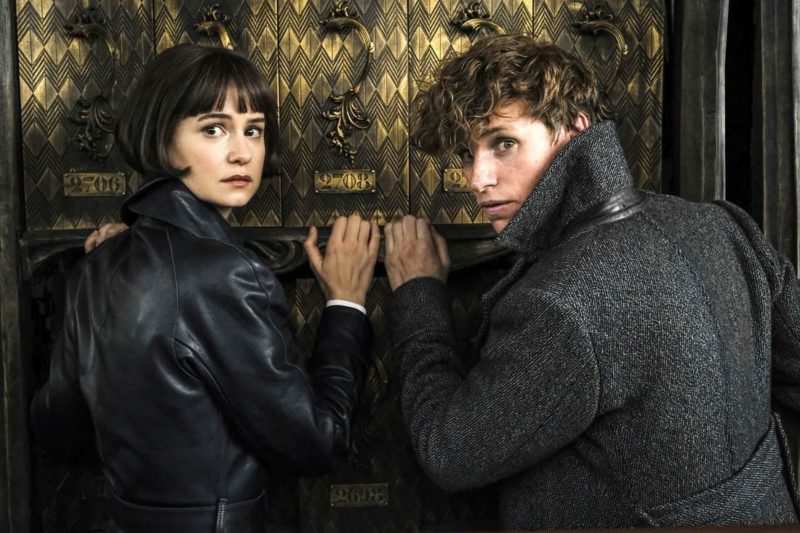 Katherine Waterston and Eddie Redmayne in Fantastic Beasts 2: The Crimes of Grindelwald

Though I have very little memory of it, I have seen the first Fantastic Beasts and Where to Find Them; even more improbable is the fact that there’s textual proof that I actually enjoyed it. Both of those notions seemed far-fetched as I sat through its sequel, a thoroughly grinding through hundreds of pages of free-associative background shading shaped into narrative sausage by JK Rowling. If the first Fantastic Beasts represented a pleasant surprise, its sequel is of the predictably unengaging kind – beat for beat and shot for the shot the kind of uninspired drivel that now typifies franchises that have a starting point, an ending point and all the time in the world in between to squeeze as much out as they can possibly imagine.

After the events of the first film, Newt Scamander (Eddie Redmayne) has become persona non grata in the wizarding world. He’s banned from travelling and estranged from his would-be love interest Tina Goldstein (Katherine Waterston), who misread a newspaper headline and thinks that Newt is getting married to foxy vixen/childhood crush Leta Lestrange (Zoe Kravitz), when in fact she’s getting married to his wormy government official brother (Callum Turner). All of this drama is emphasized when Gellert Grindelwald (Johnny Depp), the purity-obsessed dark wizard our friends helped jail in the first film, escapes from his cell and returns to the world with the very singular purpose of uniting all pure-blood wizards against the non-magical. Newt’s old pal Albus Dumbledore (Jude Law) asks him to help capture Grindelwald yet again – and two hours and change of nonsense starring all your favourite characters like Fizzwort Lumpdumpkins and Picklesnitch Hagelslag ensues.

There’s a lot wrong with Fantastic Beasts 2, starting perhaps with the obscene amount of exposition that needs to be unloaded in a movie that, from what I wrote about it two years ago, was once refreshingly free of exactly this type of bullshit. JK Rowling (who has sole screenwriting credit) has clearly been allowed to run buck fucking wild all over the Harry Potter universe (which, granted, she created), meaning the film gets bogged down in minutiae early on and never recovers.

Fantastic Beasts 2 is surprisingly static and dull for a huge blockbuster ostensibly aimed at the pre-teen set; a mind-boggling amount of it features the characters talking to each other from across the world via magical hologram and other ghostly, smoke-filled apparitions. Even more of it is circuitous political conversation that, I imagine, contains some trace amounts of pleasure for Harry Potter die-hards – but not for me.

As you may have guessed at this point, I do not roll particularly deep in the Harry Potter mythos. I’m of an age where I read many of the books when I was the right age for them and promptly moved on; I am not one of the people who emitted a gasp of wonder when a 600-year-old wizard with brittle hands (played, improbably, by Brontis Jodorowsky – son of that Jodorowsky) that was apparently alluded to in the books showed up. In a way, I have to appreciate that Rowling took the road less travelled by furthering the very profitable world she invented with this dense, dimly lit horseshit; it simply strikes me as exactly the wrong way to go about doing this. Fantastic Beasts 2 feels like an expansion pack for a game you’ve never played and may, in fact, not even exist. It feels like a dump of raw information put forth by someone who was certain you knew what to do with it, but never thought to check beforehand.

Add some questionable Holocaust parallels to the mix, an audience surrogate character ported from the first film (a hapless Muggle played by Dan Fogler) who now has so little to do he doesn’t even get to fulfill the role of being the guy who goes, “Pardon my French, but what the hell is this?!” every time someone casts a spell that reverses time or whatever, a couple of flashbacks sequences that remind us what the Harry Potter movies once looked like, a scene in which Johnny Depp takes a bong hit from a skull that projects images of horror and pestilence, a woman who turns into a snake and millennial Björk figure Ezra Miller as a guy from the first one who has become thoroughly uninteresting in between. Fantastic Beasts 2 promises the fantastical, the delightful and the larger-than-life, but it delivers a dutiful grind of backstory that never really considers engagement as a viable short-term goal. It ends with the promise of more, though, so maybe if we’re patient – if we’re good little boils and germs – the next one won’t be such a colossal bore. ■

Fantastic Beasts 2: The Crimes of Grindelwald opens in theatres on Friday, Nov. 16. Watch the trailer here: