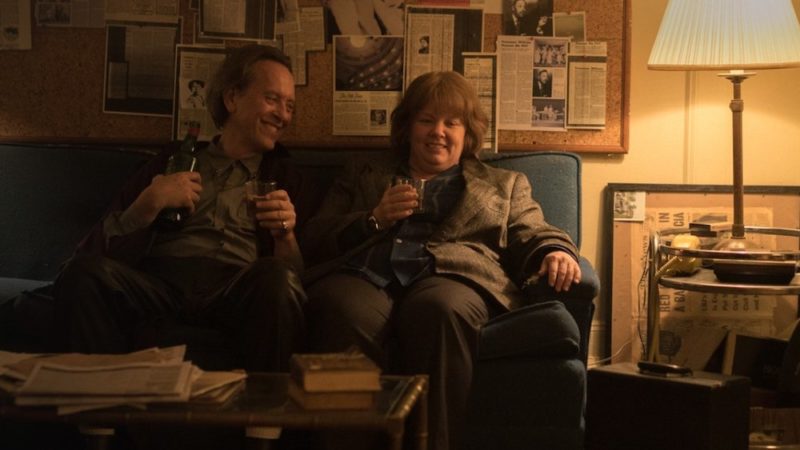 Richard E. Grant and Melissa McCarthy in Can You Ever Forgive Me?

There is a real tenderness in Marielle Heller’s Can You Ever Forgive Me? In a film based on the true story of the curmudgeonly biographer Lee Israel’s foray into fraud and forgery, the film explores the improbable friendship between Lee and Jack Hock. A movie that is unabashedly queer and improbably suspenseful, Can You Ever Forgive Me? feels as though it was from an another era.

The film’s atmosphere is rich with yellowed pages and dense, antique air. So much of the movie takes places in apartments and used bookstores as the characters are eclipsed by stacks of books. While set in the early ’90s, the movie still portrays an old New York before gentrification and a right-wing mayor sunk its teeth in. Without any pretense of homage or affectation, Heller’s sense of space feels like the great intimate works of 1970s auteurs like Bob Rafelson and Hal Ashby. This is a profoundly brown film, ripe with the textures and smells of a dampness and musk. It almost feels forged of the earth: a world of mould and romance.

Both Melissa McCarthy and Richard E. Grant are fantastic. They easily fall into the lives of these two people and bring them to life. In their own very separate ways, Jack and Lee are prone to performance. While singular personalities, they also easily fall into different identities for a laugh or a con. There is a deep sense of play in their adventures and a deeper sense of romance in how they allow their imaginations to lift them out of desperation.

Yet, at its heart, this is a profoundly grounded movie. It is fundamentally about the difficult and sometimes impossible process of being a writer. This movie has resonated deeply with critics, in part, because it captures the solemn drudge of writer’s block and the cruel populism of the publishing industry. It’s very rare that a movie captures both the dullness and ecstasy of writing so effortlessly. Writing is a whole lot less dramatic than the other arts, too, so it’s especially noteworthy that this film is exciting and even suspenseful.

It is, however, not without its flaws. Can You Ever Forgive Me? struggles in its final act as Lee starts to lose control over her con. It isn’t exactly bad, it just fails to capture the right tone. While the film’s lead-up is so gripping and tense, the downfall just feels inevitable. It isn’t tragic or rewarding, it’s just there, quiet and ordinary. Even then, the film’s final scene is so powerful that this little blip is barely noteworthy at all.

It’s hard to say how Can You Ever Forgive Me? will measure up by the end of the year. It is a small stakes movie told well. It has a strong sense of space and an atmosphere of real intimacy that is increasingly rare in American movies. Above all else though, Can You Ever Forgive Me? is a movie about loneliness. The characters might be loud and abrasive, but they live mostly solitary lives as they struggle to really fit in. While Jack and Lee might find each other, they never stop butting heads and pushing each other away. While the movie might sound a bit twee on paper, it is anything but.

This is Marielle Heller’s second feature film after her debut, The Diary of a Teenage Girl, and she already has such a sure eye. While the actors bring so much to the table here, Heller creates a universe that lives far beyond the confines of the screen. She has a special talent for bringing to the forefront small gestures and even temporary desires, crafting a universe that feels both cinematic and real. It’ll be exciting to see what she does with her next project, the already anticipated Untitled Mr. Rogers/Tom Hanks Project. ■

Can You Ever Forgive Me? opens in theatres on Friday, Nov 2. Watch the trailer here: