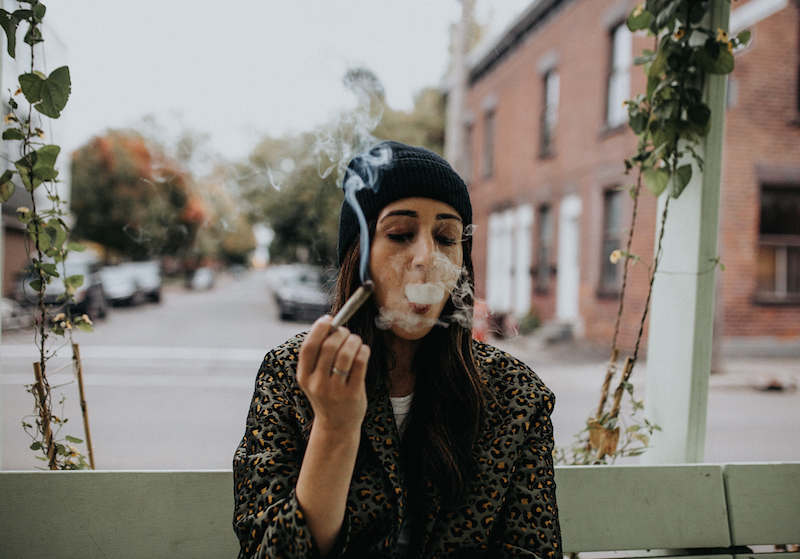 As the founder of Allume, an “accessories shop and subscription box service geared towards female tokers,” Camille Chacra was overjoyed on legalization day — and not just for commercial reasons. She’s a user, a proponent, a believer; she thinks cannabis is important for self-care, supports the expungement of possession charges and wants to explode the notion that weed is a dude thing.

In being these things, she is an interesting member of the city’s cannabis scene. She’s an entrepreneur but also an advocate; she supports political change and is interested in creating and fostering a culture but her business’s existence acknowledges that there is a commercial side to her interest. Recently, Chacra answered a few of my questions about bud, business and belief.

Dave Jaffer: Is cannabis part of your self-care practise?

Camille Chacra: I personally use cannabis as treatment to mainly prevent my chronic migraines and fall asleep to ensure I don’t have epileptic seizures; severe lack of sleep can be a trigger, though I’m fortunate my situation isn’t life-threatening. I also use pot recreationally because I’ve always enjoyed the feeling. It’s a great way to unwind after a long day. In terms of my products, I really like to encompass the overall cannabis lifestyle, so I don’t just offer pipes, papers and ashtrays; I also carry wellness items like Foria hemp-based lubricant, hemp-based lip balms, candles and incense. It’s all about enhancing and elevating one’s routine with cannabis.

DJ: It seems like everyone is rushing to be part of the self-care space and the cannabis space and you’re right in the middle of it — and have been. Do you worry about all the new competitors in the space?

CC: I don’t worry about new competitors because that’s the name of the game in any industry. I already have several, which is fine! You just have to stay true to your brand and vision, and make sure it stands out as uniquely yours. I’ve seen companies rip others off, which is unfortunately very common in this industry, but you just have to do you and be the best you can possibly be. If you focus too much on the competition, you’ll lose sight of what’s really important: cultivating and sustaining your own business. However, I’ll be totally frank and admit that seeing companies led by people who don’t actually know much about cannabis or its rich culture/community is irritating. For me and many others, this isn’t a money grab. I’m passionate about the plant and want to provide the best and most genuine shopping experience possible.

DJ: Where did the idea for the Chill Box come from?

CC: I was sitting around with some pals and one of them asked me to pass over his shoebox. Seemed very random, but when he opened it, all of his cannabis tools and herb were beautifully compartmentalized in the box. I decided from that moment that I would create a subscription box service mainly catered to women because at that point, I had so much trouble finding accessories that spoke to my understated, minimalist feminine aesthetic. Go to any smoke shop and all you’ll see is Bart Simpson bongs and so on. It’s also nice to receive something special every month.

DJ: What is your perspective on legalization?

CC: I’m of course very happy that cannabis has been legalized, but there are still so many fundamental issues. Some of the laws are completely unreasonable, the product shortage is ridiculous, but it is what it is. The issue I’m most passionate about is amnesty for those with minor possession convictions. Yes, it’s great that the federal government has issued pardons, but that’s not enough. That’s why I’m donating 10 per cent of sales from my new grinder cards to Cannabis Amnesty, which recently launched a campaign and petition demanding expungement.

DJ: As a culture, where are we vis-à-vis cannabis and where should we be?

CC: There will always be stigma and many people will continue to see cannabis as a dangerous drug, but at the same time, I’ve noticed that people in my circle and network are becoming more accepting. The key is knowledge; there are so many great resources like Leafly [and] Lift & Co. for instance, that offer substantial information on all things weed-related, which in turn makes the plant a lot less intimidating. We basically need to reverse the Reefer Madness mindset, which fuelled misconceptions and perpetuated lies on a massive scale. Hopefully, the continuous sharing of information will reverse much of that.

Where are we going? I have no idea. This is all so unpredictable, with many calling legalization an experimental project. My hope is that the cannabis culture here will flourish and that one day, we’ll have private shops here in Quebec. There are so many people with creative ideas who could make a big splash. ■

The above interview has been edited and condensed for clarity. An abbreviated version of this interview appeared in the November 2018 print issue of Cult MTL.