If you stood at any busy Montreal intersection and asked the people who walk by to name Québécois poets, I figure it might take days before anyone ever names Yves Boisvert. Though well-known in poetry circles, Boisvert (who died in 2012) was hardly a household name. It’s not his fame (or lack thereof) that makes him the central character of Yan Giroux’s À tous ceux qui ne me lisent pas; it’s not even his poetry, per se. It’s the dedication Boisvert had to his art, which was — for most of his life, anyway — his only means of income.

Martin Dubreuil stars as an Yves Boisvert somewhat loosely based on the real Boisvert, a hard-drinking, hard-living poet who resides in a decrepit rooming house that’s actually in the process of being torn down and rebuilt as luxury condos. Boisvert refuses to take another job to supplement the income he makes from poetry. His editor (Jacques L’Heureux) has spent decades going to bat for books that are well-regarded but entirely unprofitable. Boisvert goes to book launches and glittery soirées, double-fisting champagne and stuffing himself with peanuts while attempting to keep a roof over his head, a recurring concern in a life where pints of beer take precedence over rent cheques. It’s at one of those soirées that he meets Dyane (Céline Bonnier), a graphic designer raising a teenage son (Henri Picard) who has long since given up on the creative idealism that fuels Yves. The two fall in love, but their relationship is somewhat strained by Boisvert’s semi-transient lifestyle and his strict adherence to principles that swim against society’s currents.

“I conceived it as an homage to Yves’s integrity,” says Giroux. “Being a poet requires daily devotion. We tend to discredit that kind of approach in our society, which is very much based on productivity. To make it requires a total devotion of self, and it can inspire others to follow in your steps.”

“That was always the path that the character was on,” says Corbeil. “He needed to understand the space that others take in his life and open himself up to them. But it seemed dangerous, when we were writing it, because it seemed like it was saying a lot about the figure of the artist. We really do present him as an artist above all things, who puts art first — so what does that say about artists in general? There’s a fine line between a guy who lives freely and a guy who entirely depends on others to live and, in 2018, that’s not an idea I’m necessarily on board to defend! It was a slippery slope. The idea is not to support his choices, you know; the moral of the movie is not that everyone should crash on their friends’ couches and eat their food! (laughs)”

Poetry factors, of course, rather prominently in the film, but less so than you’d expect from a film about a poet. There are three poems of Boisvert’s performed in the film — two on stage and one in voice-over. Compare that, say, to a biographical film about a musical artist, where dozens upon dozens of songs will at least be touched upon in the narrative. Part of that comes from the very particular task of conveying poems on-screen.

“If you make a movie about music, putting their songs into action is very simple,” says Corbeil. “But it became a question very early on: how can we put these poems across?! Of course, we’ll see him sitting at a table writing at least once or twice, but how do you breathe life into this? What strategy can we use to put forth poetry as a major aspect of the movie? It’s a love letter to poetry, there has to be poetry in it! We watched a lot of movies about poets to try to see how they did it — and we didn’t want to do something like they do in Howl, which is to put forth literal illustrations of the poems. We didn’t want to give this man this sort of magical poetic vision where, you know, he looks at a fridge and when he opens it, it’s filled with flowers or magic literally bursts into the real world! (laughs)” 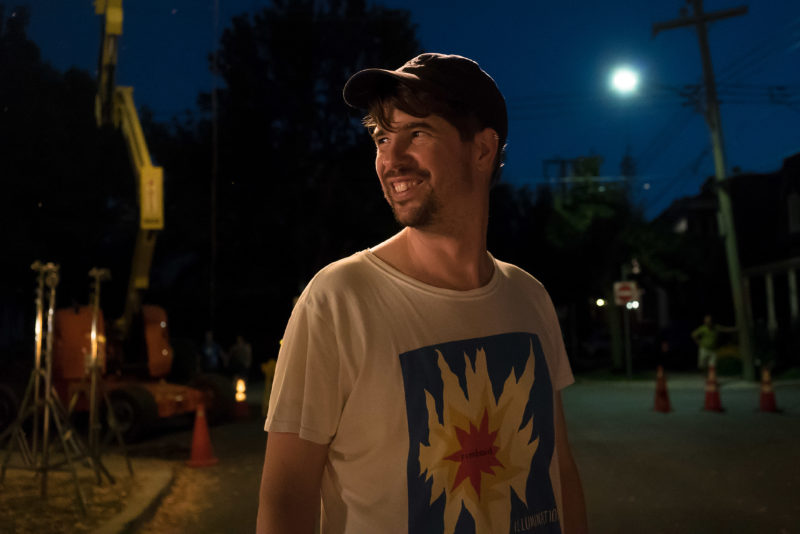 Giroux himself met Yves Boisvert as a younger man — a meeting that left a lasting impression.

“I met him when I was just starting to write poetry,” he says. “He was sort of a gateway to contemporary poetry for me, in a way. After that, I kind of moved from poetry to cinema, after which I started working in advertising. At that point, I was already making compromises based on my ideals. I always saw Yves as a real example of integrity, and I felt that the impression he had left on me had great value. It really made people take a look at their own lives and their own compromises. In this movie, we’re talking about a poet and what a poet needs to do to live from their art… but these are questions that everyone asks themselves. We use a poet in this movie in a way that’s significantly more intense — he’s on this quest for absolute artistic freedom — but these are questions that everyone asks themselves, whether it’s choosing music over a law degree… everyone has to make that kind of choice in life. And I hope that that aspect connects with people.”

“Yan basically threw me in there, but he gave me a parachute,” says Corbeil, who was not familiar with Boisvert’s work before joining the project. “Yan introduced me to his work by giving me poems, but also by taking me to meet some of Yves’s friends. He had just died, so there were tribute nights in Trois-Rivières where we met his editors and people he’d worked with for years. It’s really through their testimonies, if you can call it that, that I started to hear a voice, or a way of perceiving the character. I think that made for a good pairing, because Yan had known him and had a very clear idea, whereas I had to make abstraction of what I knew of him without actually knowing him and finding a more narrative truth. Who is this character? What do we do with him? What can we say through him, beyond relaying biographical fact? Yan made sure to respect the real Yves’s memory, while I created an Yves that would be coherent for viewers.”

Although there was an Yves Boisvert and there was a Dyane and the poems that Dubreuil reads in the film are actually Boisvert’s, I’d hesitate to call À tous ceux… a biopic. It doesn’t really dwell on biographical aspects of Boisvert’s life beyond the immediate — and it’s set in 2018, even though the real Boisvert died in 2012. The on-screen Boisvert eventually gets a job subtitling (a job that both I and Corbeil have done, it turns out), but the real life Boisvert did have a couple of jobs throughout his life. In other words, the Yves Boisvert you see here is not exactly the one that really existed — and the 2018 you see is not necessarily the one you see when you look out the window.

“It was a production design choice, more than anything,” says Giroux. “We wanted to have this intemporal look. In the hipper neighbourhoods in Montreal, fashion moves fast, but in the kind of suburban bars where Yves hung out, there are classics that never go out of style. On one hand, I wanted it to stick closely to this idea of this timeless space that isn’t really influenced by fashion; on the other, I think it’s important that the movie is set now, because what’s he’s fighting against is even more pertinent now than it was five or ten years ago. The world hasn’t changed for the better since Yves died, and I wanted to keep him alive to see what it’s like for a poet in the world we live in now.

“Ultimately, I’m paying homage to him because I know I’ll never have the amount of integrity he has,” Giroux continues. “I think it’s important that there are people like him who come and shake things up. I’m much more polite — I’m a good little boy, in a way. But it’s important to have people like him out there. It’s not always fun, but sometimes having the truth thrown in our face is what we need.” ■