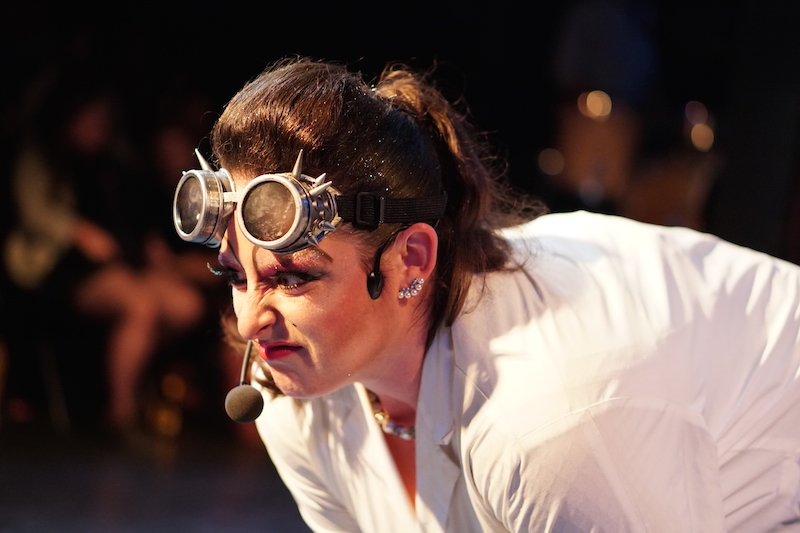 MainLine Theatre’s production of Richard O’Brien’s The Rocky Horror Show has become a much-loved part of the city’s fall theatre calendar, and this year’s edition, once again directed by MainLine/Montreal Fringe head honcho Amy Blackmore, aims to continue that legacy.

“For generations of fans, this show has represented inclusion, transgression and community,” says Blackmore. “All that aside, my favourite part about the show is the callbacks.”

As it’s time to do the time warp again, I caught up with Steph McKenna, who is once again playing the show’s lead.

This interview has been edited for clarity.

Dave Jaffer: You’re playing the lead in Rocky. How many years have you done this now?
Steph McKenna: I am indeed playing Dr. Frank N. Furter. I have been playing the lead since I was offered and accepted the role four years ago. [That] was my first time working with this production. I had originally auditioned to play the role of Magenta, but then Amy went to Edinburgh, saw a woman playing Titus Andronicus, had an epiphany and offered me the role of Frank.

DJ: What’s the attraction to and allure of this show?
SM: Aside from the show having a killer score and getting to play a lovable villain who sings and dances through every emotion, it’s a cult classic with a huge following. It is so cool to be a part of a piece that has existed with so many generations of super fans from all different walks of life and of all ages. I am a part of something that stretches way beyond our city limits. Mix that with being able to work with the Cadillac of teams made up of extremely versatile and talented individuals [and] I wouldn’t trade this experience in for the world and that’s an awesome feeling.

DJ: When you’re not doing that, what do you do?
SM: I work at the Segal Centre for Performing Arts. I handle events there and also work as the Front of House Assistant Manager. Otherwise, I’m an actor. I was in David Fennario’s Motherhouse at the Centaur Theatre and played the very lovable and unforgettable Dance Gecko in Dance Animal, a show presented at a few Montreal Fringe and Just for Laughs fests. I have also gotten to play a number of quirky characters with Brave New Productions. I often work with them and get to play some pretty cool roles like Beethoven. Beethoven!

DJ: Why do you do this work?
SM: I am super shy by nature so it’s quite something to be able to explore someone else’s thoughts and ways of being. People often say things to me like, “I don’t know how you do it, I could never get up in front of a bunch of people and do what you do.” To be honest, if I had to play myself all the time, I wouldn’t do it either. But when you get to research and discover what it means to step into someone else’s shoes, it opens up whole other realm of possibilities and creativity. If we manage to get the audience on board with the choices we’ve made, fully immerse them in the experience and send them home having provoked any kind of sentiment or thought that’s an awesome life experience for all parties involved. There’s nothing quite like live theatre.

DJ: What is your favourite part of being a Montrealer, and a Montrealer working in the arts?
SM: I love my city, the history that created it and the future that will help shape it. Montreal has such a tight theatre community. It is pretty special to watch my peers and friends grow together to try to evoke positive change and strengthen the Montreal theatre landscape. ■