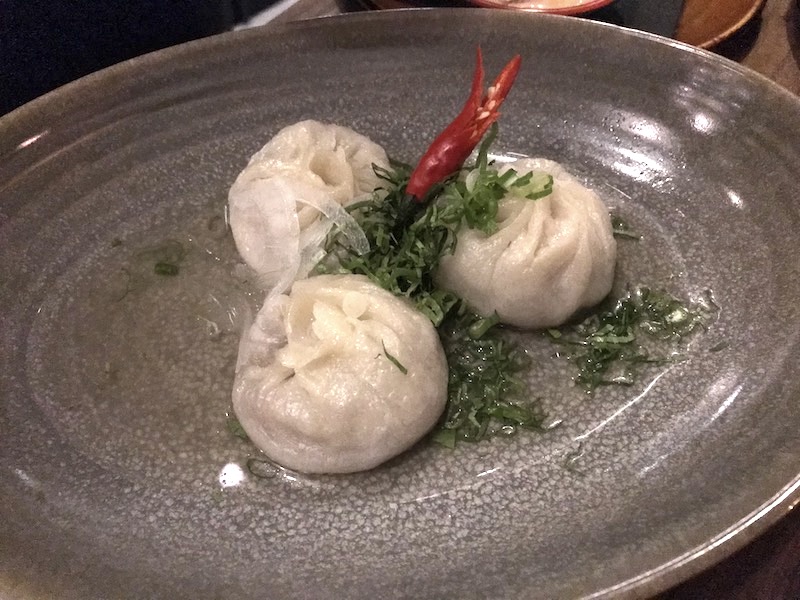 Nothing gets attention like a swanky new Old Montreal restaurant, especially one that makes headlines for a $100 dumpling infused with Louis XIII Remy Martin.

A fresh face in its neighbourhood, the dim sum bar Jiao was sprung from the mind of Tongue Bui of the Plateau nightclub École Privée and food truck proprietor Olivier Berkhani, with chef Phong Thach directing the woks and steamers in the back. It’s a slick space with ebony tiling and an emphasis on bar seating, serving small plates below the gauzy lampshades that run the length of the eating area’s ceiling. It flips what’s typically a Chinese brunch with tea for a nightly dining experience with cocktails set to classic hip hop until 3 a.m., serving dishes at bumped prices in part due to the locale but also for their extravagant add-ons like scallop slices, lobster tails and, yes, that cognac-laden dumpling.

The sharp contrast of Jiao to its not-too-distant neighbours in Chinatown are hard to ignore when you think about it. Dim sum is more of a concept than a calling here. I could stuffily say that this isn’t a “real” yum cha experience, but hey, were I sailing on MDMA after a full evening in a strobe-lit basement club and wanted dumplings—no matter the price—early in the morning with a decent cocktail? I’d come here. With that in mind, I figured I would give it all the benefit of the doubt and checked it out, only much earlier in the evening and sober.

Servers are quick to offer options of wine or sake alongside a nostalgia-themed selection of cocktails with names like the Godzilla, a sweet-sour blend of kiwi, lime and keffir leaf in sake and gin, or a series of yuzu syrup-based kamikaze shooters served in a Chinese tea pot. Whatever your poison — and try one, as the drinks here are good — you’d notice that the menu’s largely a selection of dumplings running from soupy xiao long bao and stuffed har gow to siu mai to potstickers, with a handful of choices that are immediately recognizable: stir-fried noodles, soups, salt and pepper squid, wok-kissed greens, General “Jiao” chicken and rice-noodle rolls.

Starting out with both soups, Jiao offers a version of thick song sao fish soup with crab meat and eggs ($8) and a wonton rose soup ($8) with the dumpling’s casing wrapped into the ornate shape of a flower. The first was one of the most wholesome dishes of the night for its glutenous texture and thick chunks of seafood. It was a good start. Even more delicious was the wonton soup’s broth that leaned a little sweeter than its traditional counterpart, with a taste that smacked of five spice powder, however shallow in the amount of broth.

On to the namesake selection of pillowy goods: Jiao’s ta chi gow/stuffed shrimp dumplings ($14 for three) had chestnuts listed as an ingredient but actually contained water chestnuts. The taste of Japanese scallop was buried under the briny shrimp, with the traitorous water chestnuts adding the occasional crunch but nothing more; actual chestnuts might’ve been more interesting. As for the second, pho luhng bao/soup dumpling filled with brisket and pho broth ($13 for three), to deem them anything but a mess would be lying. There’d be a brief moment when you could taste pho broth, but it’d quickly be overcome with the thick fat of the brisket. As for the siu mai/pork dumplings ($12 for three)? Topped with slices of scallop and a “creamy torch sauce,” they delivered what they promised: meaty pockets of pork that were pre-dolloped with spicy mayo. This was thankfully followed up by the yeung hai kim ($14 for two), thick balls of ground shrimp and crab deep-fried and using a crab claw as the stick. While not a dumpling, these were ginormous offerings compared to everything else, and were welcome salty bites of fried seafood with a pretty rad presentation.

I’d hoped that the next dishes of chili oil chow fun rice noodles with brisket ($11 half-portion/$18 full) or the General Jiao chicken ($12 half-portion/$19 full) would’ve been steps above the dumplings, but sadly, I can’t recommend either. The former started out well with cuts of brisket and spoonfuls of XO sauce on top, but that’s the only place the flavour comes from on this dish, as their chili oil was just a slight source of spice and not much else. Why not roll those noodles in the delicious XO sauce? The General Jiao — intended to be a play on one of the most ubiquitous dishes in Chinese-American restaurant history — was barely crisp and crunchy cuts of chicken breast rolled in barbeque sauce. I wanted to enjoy this dish so much, and all I found was an all-American masquerade.

There’s time yet for Jiao to do a lot of retooling on the menu, and frankly, they need it. Attentive service and delicious drinks were a saving grace, but otherwise, I’m headed right back down the hill to Chinatown after a night out. While I’m sympathetic to Jiao’s efforts to do a modernized take on Chinese staples, they either haven’t pushed the fold far enough, or need to pull back a bit more. ■