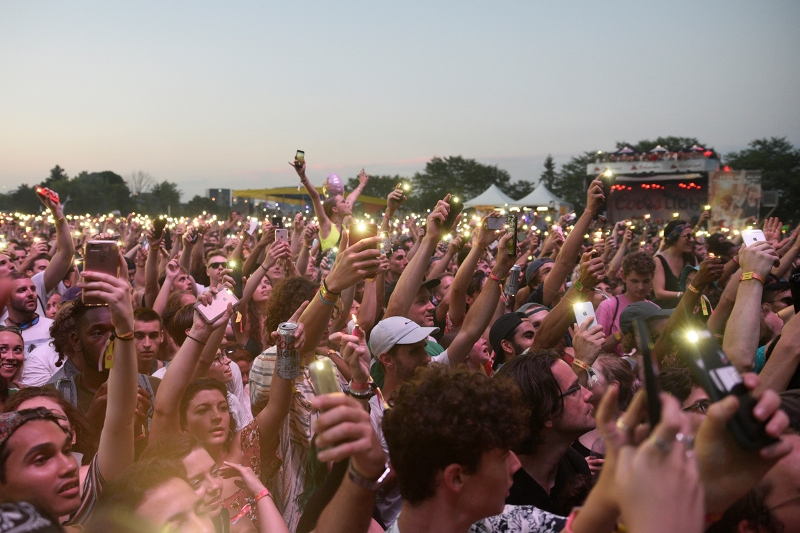 Our cultural pundits are ready to sound the death knell for the music festival. In the last year, Pitchfork has asked if line-ups are getting worse, The Washington Post has wondered if there are too many festivals and Paste has said we’ve reached peak festival. What’s concerning is that the numbers back these thinkpieces up.

A panel was held on Saturday afternoon at Rialto Piccolo (a POP Symposium, part of the POP Montreal festival) to dissect this worrying phenomenon. While the event was billed under the question of “Has the festival bubble burst?” the discussion revolved around the five panelists’ (festival organizers) thoughts on how to keep festivals alive.

Melissa Auf der Maur, former Hole and Smashing Pumpkins bassist and the co-founder of Basilica Hudson SoundScape festival, believed the remedy was a place-based festival culture, one that rooted itself within and promoted “four blocks” of a city. SoundScape takes this to the extreme — it is 24 hours long and offers attendees the option to spend it all at the Basilica Hudson, a former factory.

Ottawa Explosion Weekend co-founder Emmanuel Sayer agreed with Auf der Maur’s sentiment, explaining that his festival encourages (well — encouraged, it was folded by the founders this year) attendees to explore the city and experience its DIY arts scene, not just its venues.

Experiences that feel personal and not artificially corporate are everything, according to Eric Barleen, talent buyer at Another Planet Entertainment. Barleen handles bookings for mainstream festivals like Treasure Island, Life Is Beautiful and Outside Lands.

He highlighted the need for festivals to incorporate unique food, local wineries and breweries, original art, workshops and seminars to ensure that the festival transcends its line-up. Barleen recalled hearing that someone didn’t like a line-up to one of his festivals but still bought tickets for the overall experience. This, he says, is what every festival should aim for.

Samir Baijal, the artistic director of Guelph’s Hillside Festival, spoke of his desire for the audience to “check their taste at the door.” As the entertainment programmer for the University of Guelph, Baijal deals primarily with students, a cohort seemingly evenly split between those that look at a line-up as a chance to discover new acts and those who look at it for talent they know.

Baijal emphasized that students are the lifeblood of any successful festival. It is thus the bills that balance up-and-comers with relatively established acts that are most appealing. Still, Auf der Maur stressed the importance of having as many smaller acts as possible, since festivals also serve as a place where new acts can meet each other and make new industry connections.

The discussion was occasionally moved along by audience questions. One person asked the panel what they were doing to ensure women and people of colour were being properly represented.

Dana Beeler, who programs a variety of festivals in Halifax, said it’s a necessity that all line-ups she works on have equal representation, which factors into her booking decisions. Representation is clearly a moral imperative; beyond that, diverse line-ups attract bigger, more varied audiences.

Beeler’s answer got to the core of the problem that organizers must deal with: how to run a sustainable festival that’s also moral, artistic and personal (that is, non-corporate). The panelists’ prescriptions make sense in theory, but recent history suggests otherwise.

Sasquatch! Festival, for example, was in line with all these suggestions but that wasn’t enough. It was cancelled this year and has an uncertain future.

Perhaps there is not one single formula for a flourishing festival but a long, season-after-season process to find out what works. With higher-ups focusing on what makes the most money fastest, that possibility doesn’t bode well for less-established festivals. ■

The least popular nominees include The Voice and The Amazing Race.