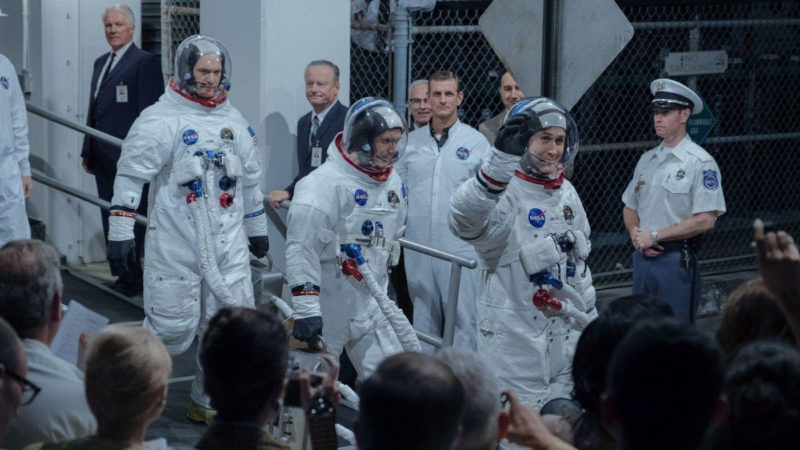 As a teenager, I became fascinated with the early space race. It had absolutely nothing to do with science — I was terrible at math and science then, as I am now, and I honestly didn’t really care about the mechanics of the thing. What was fascinating to me was that these men dedicated themselves to something that was almost completely unknown and unverified; they put their lives in the hands of suppositions. It was almost art, in a way; I suppose I drew a kind of line between this exploration of the unknown and the purposely unlikeable, unmusical and un-artistic things that I also liked in other realms. I liked bands that did not care if people actually liked the music they made, and these were guys who did not care if no one believed that they could make it to space.

Damien Chazelle’s First Man chiefly takes place right after that period. It’s a movie about a man so broken and so emotionally repressed that this unknowable space race represents just about his only chance for salvation. Neil Armstrong (or Chazelle’s conception of him) is a man who hasn’t simply been ravaged by grief, he’s been transformed by it, galvanized into something else entirely. Going to space is less a desire for merit or glory than it is one for a kind of unknowable transcendance — one that’s everything but guaranteed. The film certainly takes liberties with the real Neil Armstrong — who by all accounts was a real beige piece of lukewarm buttered toast — and makes him into the tragic figure at the centre of triumph, a narrative approach that doesn’t always gel with Chazelle’s gritty, quasi-molecular style when it comes to the rest of it.

The film chronicles Neil Armstrong (Ryan Gosling) as he moves from test pilot to a plum role in the fledgling space program. His resilience at the insane experiments NASA conducts puts him in a leading role in the program under Deke Slayton (Kyle Chandler), the Chief of the Astronaut Office. NASA is in a race against time as the Soviets clear every hurdle just before the Americans attempt it; their ultimate goal is to land on the moon before the Russians. Armstrong takes every defeat and setback on the chin. He’s never discouraged, never upset and never particularly stoked about anything. What Chazelle argues is that this all stems from the death of Armstrong’s two-year-old daughter in the early ’60s; Armstrong has repressed his grief so much that he’s taken just about every emotion besides steely resolve with it. Even as friends and co-workers die in botched missions, Armstrong remains calm, cool and collected. Even when he’s teamed up with blowhard Buzz Aldrin (Corey Stoll), who says what’s on his mind at every turn, Armstrong takes him to task with even-keeled resolve.

You guessed it: Neil Armstrong is not the most compelling protagonist you could imagine for a film that’s about a world-changing event. He’s yet another one of Gosling’s strong, silent types, which by all accounts is a pretty accurate depiction of the man Neil Armstrong presented as — but Chazelle’s attempts at an inner life don’t really work. His scenes with his wife (played by Claire Foy, who’s not really given much to do besides stare in panic at the radio) should form the emotional basis of the film, but they don’t, really. Armstrong comes across more as an icon than he does a person. As he did in Whiplash, Chazelle makes a kind of robotic determination and obsession the defining characteristic of his lead to the detriment of nearly everything else.

This is exacerbated by the fact that Chazelle is an extremely precise and intense visual stylist. His previous films have been so rhythmic that they tend to function as a bit of a smoke show, using their visceral intensity to paper over things like, I dunno, a dorky white guy saving jazz by playing the dorkiest and whitest possible version of it. First Man is stylistically fairly different. Though it has moments of intensity, it’s more precise and deliberate, putting a tremendous amount of weight behind the flicking of a knob rather than bombast. These sequences are by and large the best part of the film. The parts that I cared the least about as a teenager are clearly the things that appeal the most to Chazelle.

I think ultimately there’s a disconnect between what appeals to me about this story and what appeals to Chazelle. I like the scrappiness of it, the sense of the unknown; Chazelle, on the other hand, seems to identify more with Armstrong and value his conception of determination above all else. There are portions of the film that seem to suggest that there was no cost too great for the space race, that the untold millions of dollars spent and the lives lost were spent in absolutely the best way possible, because it meant Americans got to walk on the moon. That’s a theme that runs through Whiplash and La La Land, too: that almost nothing is too big a sacrifice for whatever you perceive greatness to be. For that to happen, Chazelle has turned his ordinary hero into an extraordinary one and, while I can’t pretend to know what the real Neil Armstrong was like, First Man’s version rarely comes across as the hero the film needs him to be. ■