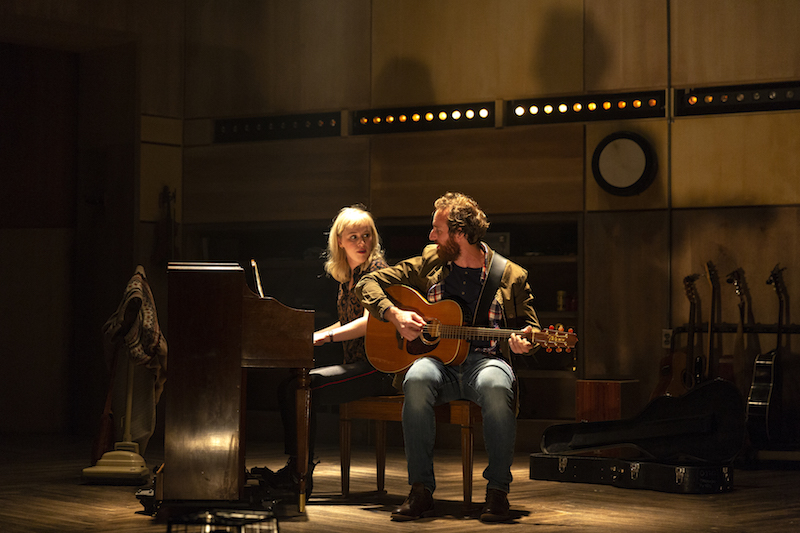 The Segal Centre’s production of Once is quite good. You should see it.

If you’d like to know why, read on, but if you’re simply in need of a helpful prod in the right direction vis-à-vis local productions, again: go see Once. If you like musical theatre and have two ears and a heart, your money will be well spent.

Speaking of money, it’s central to the plot, here. Guy (a stalwart if unspectacular Greg Halpin, making his professional stage debut) doesn’t have any. He works in his dad’s Hoover (vacuum cleaner to you) shop in Dublin and, when he’s not doing that, he’s busking for change. He’s talented, but his heart isn’t really into it anymore.

Girl (a spirited and delightful Eva Foote, also making her professional stage debut) is a Czech flower girl living in Dublin. Like Guy, she also has no money. Unlike Guy, she’s long on energy, enthusiasm and a belief that love and music (and love of music, making music and stubbornness in the face of adversity) is essential to being alive. She sees Guy busking and is instantly interested; she likes music and he makes music and she wants to know more about the guy who does the thing that she likes.

Of course, there are complications. Guy doesn’t want to play music anymore; his heart is broken and as such his progress in life has stopped. Girl doesn’t think that’s good, or good enough. She doesn’t accept it. She believes in music, in love, and in love of music and, is generally is possessed with a pushiness that generally only works if you’re charming and Eastern European at the same time. (Foote is equal to the task; with apologies to the rest of the cast, Ken Mackenzie’s beautiful set, and various other technicians, her strong and vibrant performance is quite obviously the best part of this production.)

Anyway, she wants him to play something for her. She also wants him to fix her Hoover, and offers to pay him with a song. What she really wants, though, is for this big Irish galoot to do something with his talent — and maybe, with hers.

Welcome to Once (the musical), whose plot you likely already knew because you’ve seen the 2007 film the musical is based on.

If you were alive and watching movies eleven years ago, you probably remember that Once was the Little Film That Could™ of that year. Made on a shoestring budget and starring Glen Hansard from The Frames and singer/songwriter Markéta Irglová, it punched way above its weight at the box office (a worldwide gross just north of $20 million), and won a bevy of hardware including an Independent Spirit Award (Best Foreign Film) and a 2008 Oscar for Best Original Song.

For a while, Hansard and Irglová had a band called The Swell Season. For a shorter while, they dated.

In 2011, the film was adapted for the stage by Irish playwright Enda Walsh. Walsh changed a few things but generally left the bones intact. In 2012, Once copped eight Tonys (and 11 nominations) and before long, a bunch of cities (Dublin! London! Melbourne! Seoul! Toronto!) played host to productions.

I saw Once in Toronto in 2015, and recognized a face (Jon-Alex Macfarlane) from the orchestra/cast from that production in the Segal Centre’s production.

Speaking of the orchestra/cast, its members work a ton over the course of Andrew Shaver’s production, deftly moving into and out of the narrative (and into and out of Martin Sirois’s magnificent lighting design) while underpinning the whole thing with their instrumentation and backing vocals.

Macfarlane (Bank Manager) and Marie Mahabal (Reza) are particular standouts here, but to a degree they are literally meant to be: their roles, both in the cast and in the orchestra, make them exceedingly important to the narrative and the music. Still they excelled. Macfarlane owned the night’s funniest moment and Mahabal played Reza with the perfect amount of sexy, dangerous grace.

Olivier Gervais-Courchesne and Matthew Raudsepp as Andrej and Svec, respectively, are also quite memorable. Their energy serves the production well. Whenever it gets a little bit sleepy, they appear and liven things right up.

The other supporting players are also solid despite how broadly drawn some of their roles are. Another publication’s critic was, I thought, a bit tough on Bryan Quinn (Billy, the hot-blooded music shop owner). I thought Quinn was fine; it’s not his fault his role is meant largely as comic relief.

Canadian music heads will notice that Juno Award-winning singer/songwriter Justin Rutledge is in the cast, but may be a bit disappointed that his role offers very little in the way of dialogue. Those same people may also recognize Halpin from Honheehonhee and Lakes of Canada. Earlier, I called his performance “solid if unspectacular,” but it merits mention that he is never more solid than when he’s tasked with playing and singing various among Hansard’s bare, grand and masculine creations.

Because the show is largely underpinned by Guy and Girl’s relationship and the will-they, won’t-they nature of their attraction to and affection for each other, both Halpin and Foote do the majority of the talking and scenery chewing. Accordingly, the crux of the narrative is found in the confluence of two simple stories: will Guy and Girl make music together and will they “make music” together.

Once runs through October 28. For more ticketing information and more, please visit segalcentre.org.