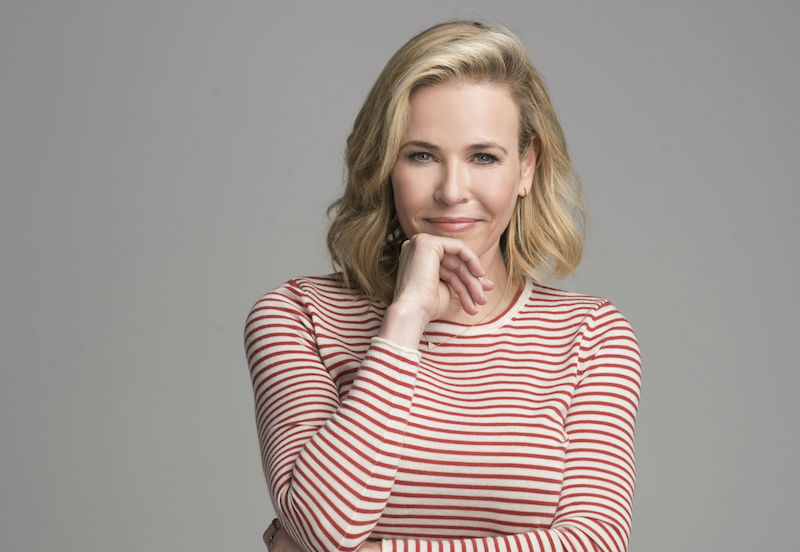 People who talk a mile a minute generally come in two varieties: those who have something to say and those who really, really don’t.

Chelsea Handler has something to say. And lately, the comic, actor, writer, TV host and activist has something to say about weed. Hence, the ‘A Civilized Conversation With Chelsea Handler’ tour, a series of town hall-like conversations featuring (starring?) Handler and moderated by Derek Riedle, the founder and CEO of cannabis media brand Civilized.

The tour is sponsored by Tweed and its Montreal stop is Oct. 4 at Théâtre Saint-Denis.

“I’m advocating the legalization of cannabis,” she says over the phone from a lounge at Detroit Metropolitan. “I am a huge advocate of cannabis, which I rediscovered in the last two years — coincidentally, when Trump was elected. I needed something to deal with my anger and outrage and alcohol just makes you more angry so I needed to pivot.”

The Trump thing is a joke — kind of. Handler allows that her interest in cannabis was also motivated by its legalization in California and the litany of research done to normalize and promote cannabis both as a recreational substance and a therapeutic one.

“I became very well-versed in the topic and very interested in all of the ways it has scientifically been proven to help kids with autism, kids with seizures, people with arthritic problems [and] older people,” she says. “It’s great for anxiety, it’s great for sleeping and it’s great for giggling. It depends what you want and there’s a cocktail for you. And it’s so much better than [the] alternative — the pharmaceutical industry — which is profligate in every sense of the word.”

Also important to Handler is how women view cannabis and cannabis use. She says she wants to “reintroduce” and “destigmatize” cannabis use among women because in her view, she still sees weed as a product primarily associated with and marketed to men.

“It’s not [just] a male thing; I want women to feel emboldened and empowered,” she says, while pointing out that labeling requirements help create and foster an environment where consumers can fine-tune their intake.

“The packaging requires them to label how much THC versus CBD is in each product. It’s so important for people to know it’s controlled now, and there’s micro-dosing, and you don’t have to be blotto — especially women,” she says. “I had so many experiences with edibles where I was off the rails and hiding in a corner for eight hours, and that’s just not the case now.”

It’s worth mentioning that the so-called “gray market” for cannabis edibles in Montreal and in other Canadian cities has grown in part because of this kind of labeling, as it has helped standardize usage. When the concept of consuming edibles is seen as less of a crapshoot and more of a measured experience — Handler and I discuss this as analogous to the concept of “standard drinks” — there’s less of a barrier to entry and less anxiety surrounding use.

It’s also worth mentioning that throughout our conversation Handler doesn’t sound like she’s giving a sales pitch. There is conviction in her voice, and it seems apparent that cannabis isn’t just a substance she wants to consume — it’s a culture she wants to be part of.

“It’s been a personal experiment of my own for the last year and a half, two years, and I’m just seeing the effect it has,” she says. “I’m very interested in getting involved in building my own line of weed if I find the right partners, which I’ve been looking at. I’ve been going to these grows and I’ve been really educating myself [and] meeting with different companies to find out and really know the information behind the product, know where these things come from, how you can make certain strains, how you make edibles and why things are more potent [or not]. There’s an educative format to weed, now; the nutritional value, so to speak, is there. It’s silly not to take advantage of it. It’s helped so many people and for me, I really want to get the word out.”

There is also conviction in her voice when she tells me the other reason for her speaking tour.

“I’m also on an apology tour for our president,” she says. “I just want to make sure our relations with Canada stay positive. We have to get through this together.” ■

The ‘A Civilized Conversation With Chelsea Handler’ tour is in Montreal Oct. 4 at Théâtre Saint-Denis. Ticketing information can be found at chelsea.civilized.life.