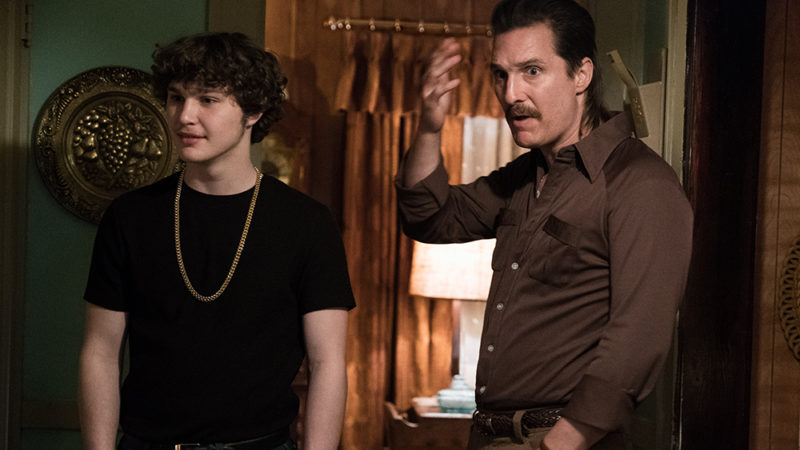 Seeing the trailer for White Boy Rick, it was clear that the film would be full of fun. This rang true at its TIFF screening this week, though fun was ultimately one of the only things it had to offer.

Set in 1980s Detroit, the film’s milieu is the epitome of “trailer trash.” Its characters’ lifestyle choices make 8 Mile look upper echelon. Of course, the city during the Reagan era is the perfect recipe for circumstantial disaster.

Matthew McConaughey plays a deadbeat dad who finds time to offer a skewed sense of compassion to his offspring between his various criminal activities. It’s interesting to see McConaughey embracing parental roles at this point in his career, yet his iconic charm only goes so far.

“There were these very moving father and son scenes [in the script] that utterly spoke to me,” Demange explains in a Q&A following the film.

Lead actor Richie Merritt is an onscreen newcomer. Playing Rick Jr., a character who is undertaking a grown man’s job, requires a certain level of maturity. Although the title White Boy Rick may just seem like a good attention grabber, there is far more to it. It touches upon the white privilege of its lead and how the colour of his skin allows Richie to often come out on top in the dynamic with his peers.

Although awkward at times, he has potential for a fruitful career ahead of him. His ability to balance between becoming a young man, and being the man in the drug community makes for a compelling performance. He’s off to a good start, though there is plenty of room to grow in terms of maintaining a strong onscreen presence.

Also making their Hollywood debuts are rappers YG and Danny Brown. Essentially, the two play extensions of their real-life personalities, with YG as a bonafide gangster and Brown as an eccentric pusherman, respectively. Seeing the latter onscreen is a true treat for any diehard fan, his kindred energy immediately apparent anytime he graces the screen.

White Boy Rick a movie with a lot of heart that isn’t quite sure of itself. It’s a coming-of-age story that forces its hero to grow up in the blink of an eye. The premise of a teen drug dealer is so ridiculous that it demands moments of humour. However, these sprinkles of comedy usually find themselves poorly placed.

Timing is the ultimate downfall of the film. The source material offers much potential, as long as Demange could move past its gimmick component. While White Boy Rick‘s cast ensure entertainment is maintained at all expense, it is hard to find compelling moments past family relationships amongst the Wershes (Merritt’s and McConaughey’s dynamic serving as the most captivating). For a film that seemed to have the best of intentions, it is disappointing to see it not reach its full creative potential. ■