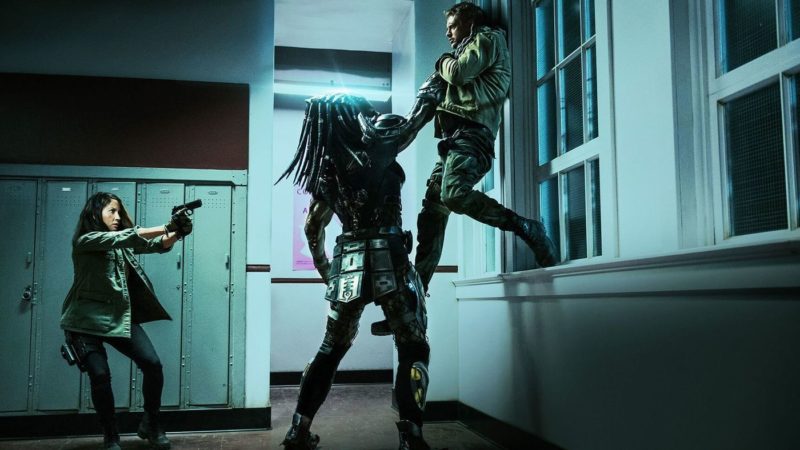 Olivia Munn and Boyd Holbrook in The Predator

The Predator, the newest entry in the Predator franchise, is littered with the worst impulses found in contemporary blockbuster filmmaking. It literally interprets bigger as better as it rushes through barely connected narrative beats, fundamentally misunderstanding its greatest assets as it tries to distract you from its aesthetic blandness and narrative inconsistencies. You walk away feeling as you might after a rollercoaster, thrilled but barely able to articulate why. By the time your heart rate has slackened and your pleasure centres have relaxed, the film itself is all but forgotten.

In recent years, the alien race known as the Predator has been travelling to Earth in greater numbers. After a ship crashes, an army unit is sent to investigate; its sole survivor, Quinn McKenna (Boyd Holbrook), is quickly scooped up by the American government for questioning — but not before he can send some of the Predator equipment to a safe location. He is thrown in with the “loonies,” a ramshackle group of army outcasts and sundry nutcases. When a Predator goes on a rampage, they have to rise up to defend themselves against both the beast and the government. Joined by a biologist, Casey Bracket (Olivia Munn) and facing off against government agent Traeger (Sterling K. Brown), the film takes ample opportunities to have people face off against aliens in generic sterile environments as well as the all-American backdrops of small-town life.

While ostensibly a standalone film, so much of the movie is devoted to rebooting and shifting the Predator mythos for a new era. While some elements work (like the inclusion of Predator pit-bull creatures), most do not. Hinging so much of the narrative evolution on the ways the Predators are changing compared to previous films is confusing and bogs down the narrative. Rather than keep things simple, the movie is man versus man versus predator versus predator, which is as convoluted as it seems.

Shane Black does manage to edge some of his signature dialogue and characterization into the film. Considering his track record as a screenwriter, it seems like a guarantee that what might have been a straightforward script was faxed into a giant algorithm machine and came out an absolute mess.

Black not only has an ear for dialogue; as a director, he structures edits as much through sound as image. Scenes like Quinn being thrown onto the loonie bus for the first time offer the promise of a much better film. As we are introduced to the other soldiers, gripped by PTSD, Tourette’s, delusions of grandeur, depression and the scars of battle (spiritual and literal), each character is allowed to shine and bounce off the other. That scene has a breakneck speed, but is guided by voices and is therefore taken in unexpected directions. It’s a credit to Black that each one of these men are memorable and loveable — you really want them all to survive to the end. While Trevante Rhodes steals the show as Nebraska, a suicidal, chain-smoking soldier, all the actors in this little unit are really fantastic.

Making the heroic gang of soldiers the army’s rejects has a similar effect of highlighting an overarching theme of government distrust. Black presents most of these men as not only accomplished army men but heroes who have been broken by war and abandoned by essential services. While devoid of overt criticism of the American government’s treatment of veterans, that theme is present in the characterization and focus of the film. Over the course of the The Predator, Black affords each character the dignity that was robbed from them.

It might have been a refreshing, if not somewhat hacky, interpretation of mental health were it not for the huge focus on McKenna’s son’s autism. Rory, played by Jacob Tremblay, is presented as a kid who has a really hard time integrating into school life. He is bullied and has issues with sensory overloads. He is also a savant, and the only person who can decode the Predator technology and language. He ends up playing a rather significant role in the film’s third act, and while it feels like a twisted attempt to reach out to make kids with autism feel like superheroes, it also comes across as misguided and condescending. It also adds another wrench to the film’s plotting that only further confuses it.

While the movie has small moments of inspiration and a strong cast of characters, too much of it feels rushed and uninspired. The story itself is incoherent and scenes transition from one to the other so quickly that sometimes you lose your bearings on where you were and what just happened. While it’s always great to have another Predator movie — it’s a franchise that has a lot of potential — this one doesn’t quite hit the mark. ■

The Predator opens in theatres on Friday, Sept. 14. Watch the trailer here: