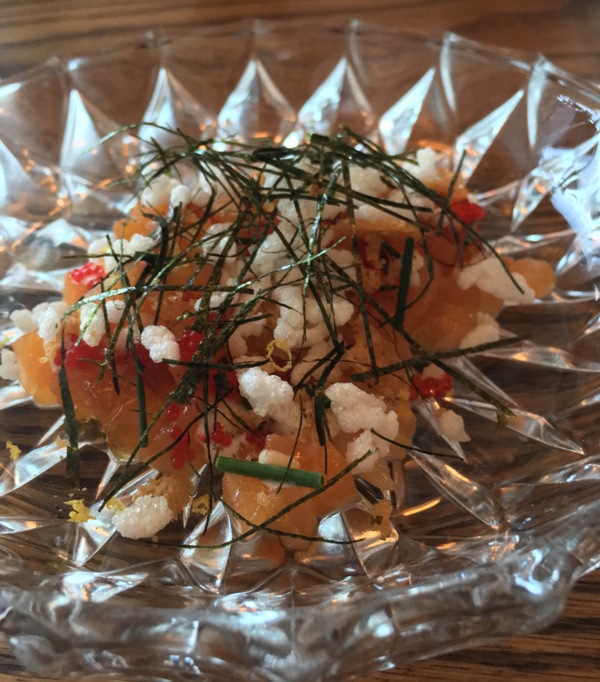 It was the tail-end of summer when I come to Little Italy, heatwave lingering, and St-Laurent was clogged with sweaty pedestrians and street sales. A stage is set for a public performance of Giacomo Puccini’s La Bohème by sundown, a curb dressed up as an imitation terrazza, and pizza’s sold alongside melting cups of granita. Despite all the kitsch, the neighbours are going about their usual routines of holding conversations with one another from their balconies or anchored with espressos at Caffè Italia. It goes to show the strength of character and ancestry in the neighbourhood.

The area’s become a focal point of activity, but less so these days from its history and older haunts. I blinked and missed it: The last two years has yielded a steady trickle of shiny newcomers. While the classics can still hold a candle to tourism, there are new faces either unabashedly offering alternatives to vino rosso and bread dipped in oil-balsamic condimentos, or simply camouflaged. Mehdi Brunet-Benkritly and Molly Superfine-Rivera’s Marconi is one of them, replete with an Italian-sounding name — though based on Mile-Ex’s old attempted title of Marconi-Alexandra — but the offerings are anything but. Just like the boat-shoed and mom-jeaned kids hunkered down with cans of Pabst in Parc de la Petite Italie for the opera show, they’re not of the place, but they look naturally placed enough if you squint just right.

Carved from the cadaver of a long-closed dépanneur, Marconi’s a bit more debonair than its next door counterparts. Black padded leather seating runs along walls either broodingly blue or repurposed hammered tin, with hardwood tables having a view of an open kitchen. There’s a lot of energy in its atmosphere, further solidified by the hostess proffering cocktails before my ass hits a chair. While there’s cause to try signature mixes here, the bartender also makes all the standards just as skilfully. I’ve got a spritz perspiring for my guest as he arrives, ice melting.

Reservations weren’t impossible to come by, but the place feels just as hyped as when it first opened. It was one of those restaurants riding the crest of the season-driven wave, serving market cuisine to a public eager for stone’s-throw produce and national terroir. Seeing as it was late summer, it felt like the best time to visit a spot like this, where a chef can have its pick of the farm’s litter.

Brunet-Benkritly was once quoted post-opening that he sought to create a restaurant that encourages snacking, but that’s only clear in the first few menu items, of which we order the whole selection: miso deviled eggs ($4), cod fritters ($5), rice crisps with small coils of smoked sturgeon ($4) and profiteroles leaning savoury with chicken liver mousse and rhubarb ($4). Each are delicate and mellow despite their composition of heavy ingredients, single-to-two biters that played like amuse-bouches or teaser trailers. Fair enough, feed me more.

Those snacks were the easy part. The thing about Marconi’s menu is that each item’s got a curveball to it that tempts the eye and intrigues. There’s tartare, but with venison; sirloin garnished with sumac; ingredients like smoked butter and stonecrops. The chef has hit his stride, and while he’s long been off the red carpet of his resumé, it’s clear he’s now sewing his own together. 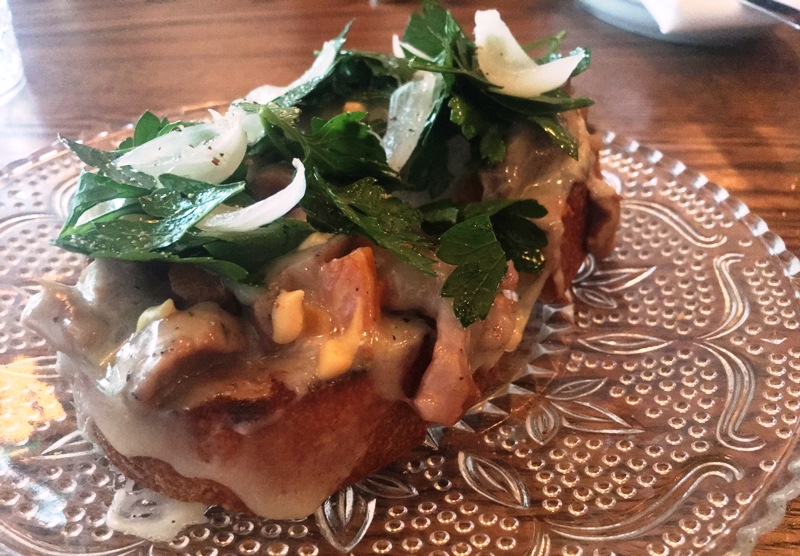 The first dish to come’s a small bowl of cauliflower panna cotta, served with chopped lobster and saltwater cucumber slices and a drizzle of olive oil on top ($16). The toppings spoke easily enough for themselves, melting into the unsweetened panna cotta that tasted none too powerfully of cauliflower, though the taste was present and played into the dairy of the dish. The only nagging note was that it tasted a little saltier than we would’ve liked, but screw it, we were enjoying the dish and were running fingers across the plate once empty. That was followed by a personal favourite of the night: finely cut cubes of cured arctic char dressed in puffed rice, nori, tobiko and dashi jelly ($14). A lot can be said for juggling so many salty ingredients and still achieving a balance of flavours, but the addition of dashi jelly just made the whole thing fun to eat, given the novelty of something disappearing once touching your tongue, cool to the touch and melting away, leaving only the faint fingerprint of a spoonful of broth.

Next came heavier hitters of the menu: whelk and bone marrow toast oozing aged cheddar and snips of Italian parsley ($14) and butter-basted sweetbreads with corn, lemon and wood sorrel ($16). The sweetbreads were crisp and cut nicely with its lemon purée and sorrel, the corn acting as droplets of sugar, and just an all-around pleasure to eat despite not being my first thought when considering the season. As for the toast? You had me at melting cheddar on whelks, rich enough that I wonder if the marrow was even necessary, but all melding and melting together comfortingly.

The only misgiving was when the main of confit turbot with green beans and pennywort ($22) arrived. That old concern about salt reared its head, even more so this time around, and it became this nagging obsession for the rest of the dish, despite the fish being tender enough that the brush of a napkin could’ve cut it. Puzzled, we’d try to cut another bite with greens, but it persisted as with the panna cotta. Our best guess was that the kitchen was using salted butter, but again, that’s just a guess. Even if we were right, it was a slight misstep.

While the menu’s got its share of gnocchi and risotto on it, make no mistake: The only semblance of neighbourhood identity here comes from namesake and geography, but that’s not a bad thing. I don’t know how most local of locals have taken to Marconi, but if they haven’t tried it in lieu of Bolognese and cannoli, it’ll be worth the sidestep from the main strip. ■