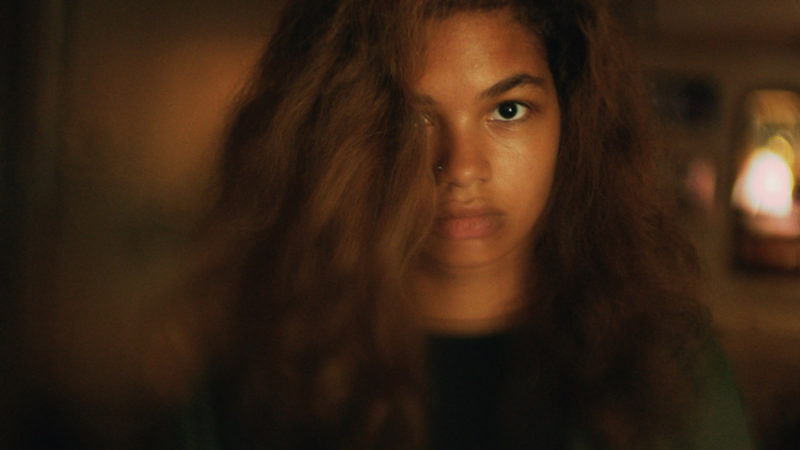 You will be hard-pressed to watch a film more audacious than Madeline’s Madeline this year. Formally and conceptually, it is a film that pushes boundaries in a way that American cinema rarely does. Centered on the experience of Madeline, a teenager struggling with her mental health, the film portrays growing tensions Madeline is experiencing with her mother and her growing attachment to her experimental drama troupe.

The film exists firmly in the realm of subjective cinema, channeling the tumultuous and hormonal energy of adolescence. The cinematography literally vibrates, taking inspiration from musical and spiritual wavelengths. Deep into the world of improvisation and theater, the camera takes on the role of a first-person witness to the proceedings, but one that is deeply implicated into this world, documenting but also channeling Madeline’s perspective.

The film’s opening scene, with echoes of Altman’s 3 Women, is a dream sequence told from the perspective of Madeline imagining herself as a cat. It sets the tone for the rest of the film and the general aura of formal instability. Very much a film about the nature and value of art, Madeline’s ownership over her own experiences and trauma becomes the central theme. She is consistently pushed to retread difficult moments and trauma in the service of someone else’s art. Young and inexperienced, her grasp on the conscious world becomes increasingly tenuous as the film goes on.

In a feature acting debut, Helena Howard is a revelation. She holds the film together, drawing together a multitude of narrative and thematic threads. Physically, she seems to literally stretch beyond the confines of her body and spiritually: she feels like a deep well. In the rich history of adolescent melodrama, she is a particularly rich messenger, handling difficult material as she plays a character who might not have a strong bearing on her place in the world.

Yet, for all its poetic and thematic considerations, the film is frustrating. Some critics will certainly argue that this is a deliberate choice from Josephine Decker, who seeks to destabilize the pleasure we experience exploiting mental health in art and cinema. With investigations into gender and race thrown into the mix, there is a lot to chew on narratively, formally and thematically, but it doesn’t fully come together. There’s a bourgeois sensibility at play that kinda overrides everything.

Perhaps it is a secondhand embarrassment on my part, a kind of repressed shame in watching people bare their souls a bit too much, that makes it difficult to fully embrace Madeline’s Madeline. While Helena Howard’s performance feels so raw and without affectation, everyone else in her life always seems to be performing. Of course, the artificiality of the lives we choose to live is part of the point of the film’s treatment of art, but it’s also grating. Beyond Helena’s electricity, the movie kinda has the atmosphere of being at a dinner party with a tipsy bunch of humanities professors discussing life and art. Egos fly out of control, tensions rise and while the conversation might still be enlightening, it is undeniably obnoxious.

For a large section of the audience who might be drawn into self-aware films about art, Madeline’s Madeline will no doubt be one of the highlights of the year. The film has already received strong endorsements from many critics who consider it among the year’s best. The movie is beautiful and features an incredible central performance. It is daring and original but also frustrating and difficult. If any of what I’ve described appeals to you, this is a film that will benefit from big-screen viewing, but if you’re on the fence, approach with caution. ■

Madeline’s Madeline is in theatres this Friday, September 14. Watch the trailer here: