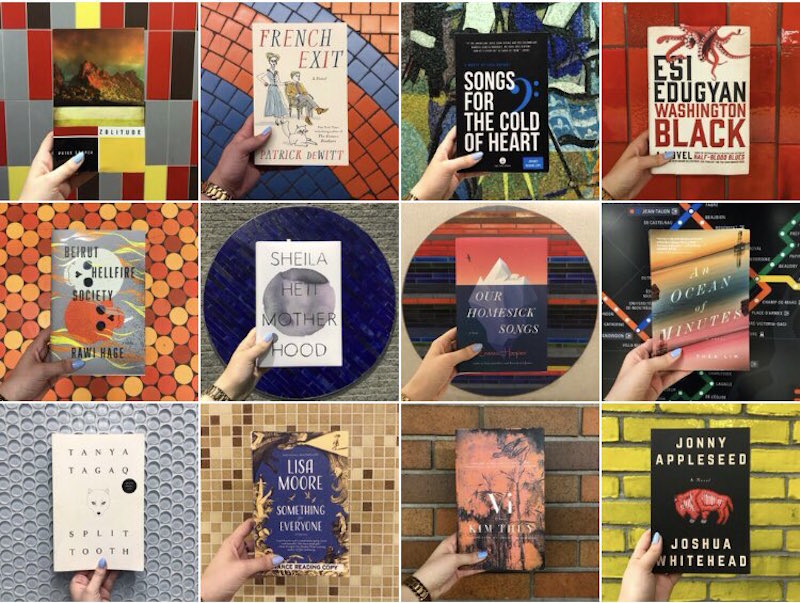 The Scotiabank Giller Prize announced its 2018 longlist this morning at the Rooms in St. John’s, Newfoundland and Labrador. Michael Redhill, whose Bellevue Square copped last year’s Giller, made the announcement.

Montreal author Heather O’Neill, who is on the 2018 Giller jury (and whose work has been shortlisted for the Giller twice) presented the longlist in a slightly different fashion.

Over the course of the morning today, she posted a photo of each longlisted book’s cover being held up in front of a suitable Montreal metro station backdrop via her Twitter account and the Instagram account she shares with her daughter, Arizona O’Neill.

Rawi Hage’s Beirut Hellfire Society, whose cover features (among other things) an orange skull and flashes of orange and yellow, is shown held atop Lionel-Groulx station’s distinctive floor featuring those colours; Paige Cooper’s Zolitude, featuring vaguely Mondrian-esque squares and rectangles, was snapped atop a similar pattern and colour scheme at Guy-Concordia station. You get the idea.

On Twitter, each shortlisted book got a brief write-up. On Instagram, there is considerably more in the way of text and context, including a short personal aside about each respective book and a bit of rationale as to why said book was photographed at said station.

The 12 longlisted books for this year’s Giller were chosen from a field of 104 submitted for consideration by publishers.

The complete longlist for the 2018 Scotiabank Giller Prize is as follows:

This year marks the 25th anniversary of the Giller Prize. This year’s shortlisted books will be announced at Scotia Plaza in Toronto on Oct. 1 and the winner will be revealed at a gala ceremony on Nov. 19. ■