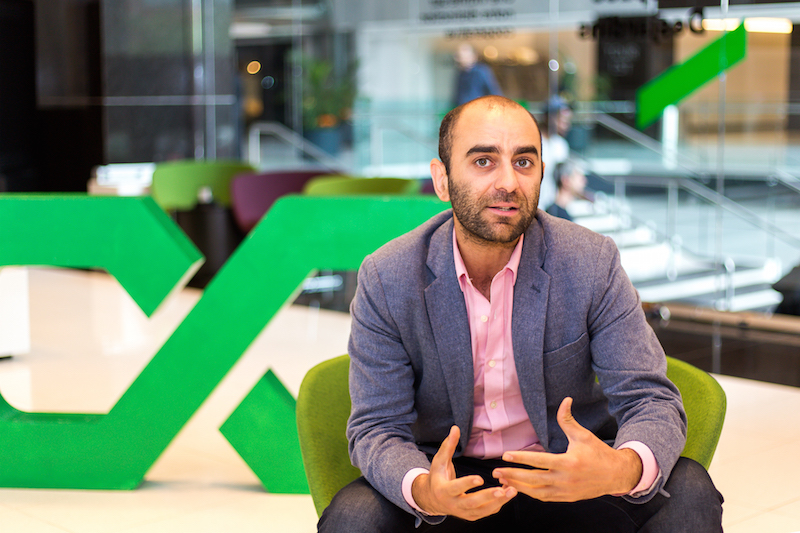 Because of this, some of the other things we do get obscured. The city’s startup and innovation scene is one of them. Montreal isn’t Silicon Valley, but if the folks behind Coopérathon have anything to say about it, we may one day be something better: an ecosystem which supports and empowers entrepreneurs, creators and specialists to solve the biggest problems affecting our world.

The 2018 edition of Coopérathon is committed to finding solutions to problems in the realms of finance, health, education and energy/environment. Each individual theme relates to the United Nations Sustainable Development Goals, which the UN refers to as “the blueprint to achieve a better and more sustainable future for all.”

Ilias Benjelloun is a veteran of Montreal’s startup and innovation scenes, and his day job is as the “Open Innovation Catalyst” at Desjardins Lab — the credit union’s innovation arm. He is also intimately involved with Coopérathon and likely its biggest fanboy.

Recently, we chatted about what Coopérathon is and who it’s for.

Dave Jaffer: Let’s begin at the beginning: What do you do for Coopérathon?

Ilias Benjelloun: I do the strategy for Coopérathon and I do the content, the program.

DJ: If I gave you 50 words or less, could you adequately explain what Coopérathon is?

IB: Coopérathon is a 25-day, part-time program where we bring citizens, entrepreneurs, aspiring entrepreneurs, engineers [and] users and potential clients to work together to develop solutions that have a sustainable impact in the world.

DJ: How long has Coopérathon been around for?

DJ: How did it get started?

IB: The first edition was just a hackathon. So, we said hey, in 48 hours — it was around health — let’s bring engineers, students [and] doctors and hospitals to work together to develop solutions.

DJ: Bring me from then to now. How has Coopérathon — and your involvement with it — evolved?

IB: In 2015, I was part of Montreal NewTech and we helped them organize the hackathon. After the hackathon, that’s when I joined Desjardins. The reason why we moved from a hackathon to a 25-day program that is part-time is to fight the shortcomings of those initiatives. Everybody wants to be innovative, everybody wants to find solutions or launch a startup, but when you go to a hackathon you spend 48 hours, it’s very intense, you meet new people, it’s very exciting, but then the day after you go back to your work and nothing happens.

DJ: So Coopérathon has grown out of a need for continuation and also because it’s been turbo-charged by Desjardins.

DJ: If I say, “I’m having a dinner party,” you know what that is. What is Coopérathon?

IB: The kickoff is at Pier Alexandra [Grand Quai] on Sept. 26. It’s a big party, it’s a big bang, it’s huge. We’re bringing about 2000 people together. That’s the big kick-off. We’re bringing [AI researcher] Yoshua Bengio [and] Matthew Luhn, who is a storyteller at Pixar. A lot of big speakers. We’re also bringing a lot of community accelerators, incubators, et cetera. The reason that we do it so big is because we want inspire people to take action. To move from idea to launch.

DJ: Then after the big event?

IB: It’s a five-week program; it’s 25 days. And it’s [centred] around sprints. Every Saturday, we have the beginning of the sprint where we have workshops, we bring the teams together, they learn. We have speakers from Element AI, workshops from District 3 and other partners [like] Libeo. So that we can give the best content for the participants and allow them to work with their potential clients, the businesses, the mentors, et cetera, to move their projects forward.

DJ: Generally speaking, Coopérathon is a conference, a hackathon, a networking event, and an opportunity for a variety of people to figure out how they want to contribute in a variety of ways — whether passively or actively.

DJ: I just said four things. If Coopérathon is one thing, what is it?

IB: If it was two words, it would be “entrepreneurship education.” Yes, there is a conference, yes there is a competition, yes there [are] prizes — $100,000, blah blah blah. When it comes down to it, personally I don’t care whether you succeed or not, [just] that you are educated. You get the right contacts

DJ: In a way that is succeeding, though. I would assume that some people go in with the expectation that they’re just going to network and meet people they may work with in the future: one, two, five years down the road. Some people have a readymade idea that they think is going to win some of the $100,000 up for grabs.

IB: The example of [Hardbacon founder] Julien Brault is the perfect example. He joined Coopérathon in 2016 and he didn’t win, but throughout his work he got in touch with people from Desjardins and started a relationship there. Then he did the Startup in Residence program that we built in 2017, right after [Coopérathon]. We worked together, and he increased his clout within Desjardins. And now he’s signed the contract [to partner with Desjardins] two years after. It took two years for him to “win” — and he didn’t win Coopérathon.

DJ: The way that we tend to discuss things lends itself to these binary narratives: winning looks one way and losing looks one way. Same deal with success and failure. With this in mind, why do startups succeed? Why do they fail?

IB: I spent, with Montreal NewTech, nine years in the ecosystem. I’ve seen startups rise and fail. I think the three things that are hard for startups, the reasons why they fail, are either [that] their idea sucks, that their team is not complete, or they’re not able to get clients. I think what sucks in Quebec is many big companies are not risk-takers when it comes to consuming local [startups]. We talk a lot about, “hey, you should buy your apple in your neighbourhood store,” but our companies don’t do that. ■

Coopérathon is a conference, a hackathon, a networking event and an opportunity for people of all stripes to dip their toes into the local startup and innovation scene. The five-week program kicks off tonight, Sept. 26, over at Grand Quai. Tickets for the kick-off are largely sold out but waiting list information can be found here. For information on getting involved, please visit cooperathon.com.