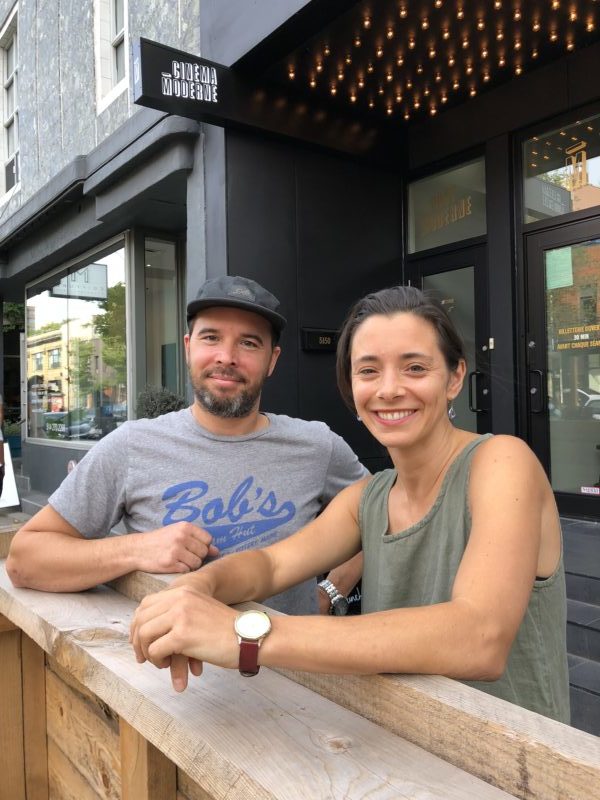 The rumour mill had been brewing for months: a new movie theatre was opening in Mile End.

The boarded up windows were an encouraging sign, but information was scarce. It dribbled out in March, aiming for a spring opening that came and went. Finally, Cinéma Moderne’s café opened up earlier in the summer, but this new cinema was lacking… well, the cinema part. The brainchild of Alexandre Domingue (owner of the post-production house Post-Moderne, which sits atop the cinema on St-Laurent between Laurier and Fairmount) and Roxanne Sayegh (a film programmer and festival director who was executive director of RIDM between 2010 and 2015), Cinéma Moderne is poised to open by the time you read these lines — but Domingue and Sayegh make it clear it’s been a long time coming.

“The motivation was to create a space for meeting and for discovery,” says Sayegh. “A place where we could show international films, organize retrospectives, present films that are a little more ‘difficult’ for other rooms. I wanted to make a micro-cinema that allowed for something more intimate — take the best aspects of a festival and keep it going all year.”

Building the cinema in what used to be a tanning salon proved to be an enormous investment of time and resources. Domingue even wound up purchasing the building when the landlord showed reticence at renting the whole thing out to a single tenant. “I have been dreaming about opening a theatre for 25 years,” says Domingue. “Five years ago, I rented a space to open a theatre from a guy who was a little nuts; I figured that instead of pouring money into it only to get kicked out, I’d try it on my own. Roxanne approached me separately with an idea to open a theatre in Mile End.”

“I thought it would be cheaper — it wasn’t,” laughs Sayegh. “We worked on it for three years but we didn’t even have an address until a year ago. Months went by and we talked about it, but it remained very embryonic. On my end, I took a business class. I did market surveys. I approached institutions about potential funding and so on. But Alexandre had been dreaming about it, too. People who know both of us even said we should work on it together! We have different backgrounds — I was in production and distribution, I worked in festival settings for seven years. After working in festivals, I knew I wanted to open something permanent. I thought Montreal needed one.”

“More than one!” says Domingue.

The one-room theatre seats 54 people and is outfitted with state of the art projection and sound systems. (There are 37 speakers in the room — nearly as many speakers as there are seats!) Though the room will also serve as a post-production facility for colour-correcting in its off hours, Sayegh and Domingue plan on having movies playing every day and experimenting with several modes of distribution, including having, say, 15 screenings of a new movie spread over an entire year.

“If you look at the current distribution model for Québécois movies, they stay on screens for two, maybe three weeks, and they disappear,” says Domingue. “At Post-Moderne, we work on about 30 features, 40 shorts and roughly 40 documentaries within a year. People ask the directors where they can see their films, but they stay in theatres for two weeks tops! There’s all this publicity and this word-of-mouth that happens, but once that hits its peak, the movie’s off screens.”

The café and theatre are also fully licensed, meaning you get a beer or glass of wine in the bar out front and bring it with you into the movie.

As far as programming goes, Sayegh favours a far-reaching approach. Where some rep and micro-cinemas thrive on cult obscurities and others on arthouse, Cinéma Moderne aims for variety. “We bring in a little bit of everything we’ve seen in Toronto, in New York, in Europe…” says Sayegh. “We want to make a mish-mash of it all, one that represents cinephilia in Montreal but also strives to bring it further. It’s not the kind of programming that can be easily summed up. (…) The goal isn’t to have another ciné-club; Montreal already has many ciné-clubs run by people who know how to program. I thought we needed a professional quality room that’s open every day.”

Cinéma Moderne will serve as the exclusive Film POP venue during POP Montreal, but amongst announced screenings are film that got blink-and-missed releases like Borg vs. McEnoe (Sept. 17 at 9 p.m.) and Alain Gomis’s Félicité (which screened at FNC last year; it screens again on Sept. 19 at 9 p.m.) as well as exclusives like Guy Maddin’s The Green Fog (screening Sept. 22 at 5:30 p.m.) and a screening of Maxime Giroux’s La grande noirceur, which had its world premiere at TIFF last week. ■

Cinéma Moderne (5150 St-Laurent) is open as of today, Sept. 17. Visit their website for more information, including scheduling and ticket prices.