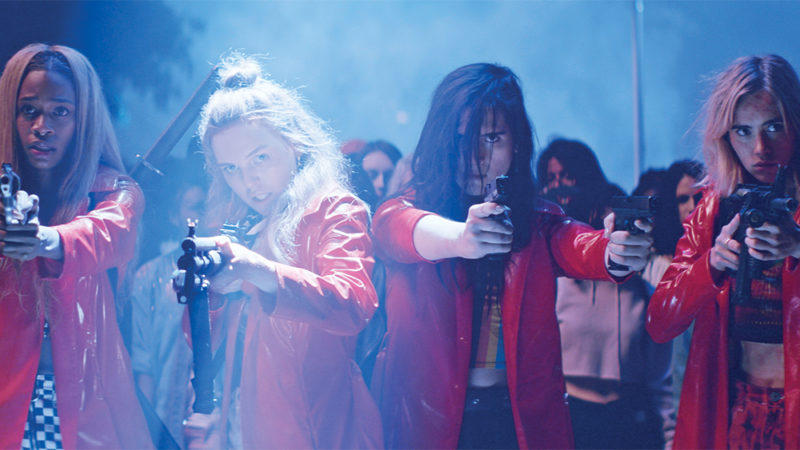 Sam Levinson’s Assassination Nation opens with a list of trigger warnings — a cheeky one, certainly, but one that also operates in exactly the way a list of trigger warnings should. I thought about that list a lot leading up to my interview with Levinson and the film’s star, Suki Waterhouse, at the Toronto International Film Festival. Days into TIFF’s much-touted more-diverse-than-ever-before edition, I was seeing people on social media lash out at films for simply depicting things that are bad, like the racist/homophobic/ableist language in Jonah Hill’s Mid90s, or throwing shade at writers for having less-than-glowing opinions on films directed by people of colour like If Beale Street Could Talk. I was seeing, on a micro (and much less aggro) level, the kinds of things that lead to disastrous results in Assassination Nation… and Assassination Nation hadn’t even screened yet. It seems like an inevitable by-product of the culture that the lines between depiction and endorsement are blurred, but there’s even more going on in Levinson’s second feature film.

Lily Colson (Odessa Young) and her friends Sarah (Suki Waterhouse), Bex (Hari Nef) and Em (Abra) live in Salem, Massachusetts, a small town with a very memorable history of mob justice. Their days are spent in a haze of drugs, partying and social media, with each of the girls harboring secrets that would radically change their lives if they got out. Lily is carrying on a sext-based conversation with the married older man next door (Joel McHale), for example, and transwoman Bex has entered into a secret relationship with a member of the football team. It becomes quite obvious one day that the citizens of Salem have been targeted by a wide-scale data leak, with a mysterious hacker leaking personal information for all to see. Secrets are brought to light (the mayor is a cross-dresser), personal moments are misconstrued (the high school’s principal is dubbed a pedophile for having a picture of his daughter in the bathtub on his phone) and the entire town descends into madness, turning to violence

“I can’t speak for any other film or the nature of anything else, but I think that for this film, what this movie is about is the way in which we communicate,” says Levinson. “It’s about the exchange of ideas — about the discourse itself. It’s about the conversations surrounding other aspects of culture and what’s right, what’s wrong, how one feels about it. That’s what we’re trying to deal with in this film. What our film is saying, more so than anything, is: beware of your own sense of righteousness. If you operate with absolute certainty that your opinion in this moment is right and therefore your opinions are just, that is a recipe for a horror film. That’s what this film is about. It’s about including all of these aspects of debate and perspectives we may disagree with.”

“Even if they’re really uncomfortable,” adds Waterhouse. “It happens to the grown-ups, too. We meet these young girls and it starts happening with them — all this vitriol, it lands on the adults, too.”

“This is nothing new, though,” says Levinson. “Social media just happens to be the medium through which this takes place, but it’s not like this hasn’t happened time and time again throughout history, sometimes with even more violent consequences. I do think that it’s something that we’re all a part of — adults, young people… it’s across the spectrum. It’s always a question of judgment. I think we have to challenge that judgment and ask ourselves: ‘Is that the whole story? Is there something I’m missing here? What is the context of their experience?’”

“And what are the consequences on our minds and how we go about our lives?” adds Waterhouse. “Or on how we interact with each other? There’s a new layer of fear that permeates everything. (…) It’s a tricky one, because you are hearing people’s experiences and perspectives which is a positive thing, but it’s like, are we meant to know?”

I bring up that on a more meaningless level, the same thing happens with reactions to films. My festival brain is only pushing me towards the inevitable backlash for movies that are currently being praised; I cannot think of social media having any other function in my life at the moment than pushing an endless stream of hot takes about movies playing at the festival. The hot takes are punishing; they are making my life markedly worse and making me doubt my own thoughts. I have to actively stay away from social media during TIFF, which is the time of the year that I spend the most time on it.

“All I know is that movies and literature and music and everything should be dangerous and exciting and push boundaries and challenge people’s thoughts and ideas,” says Levinson. “I believe that in the bottom of my heart. However history judges something or however they look back on it, it is the responsibility of artists — especially at this point in our culture, when things are so chaotic and so vitriolic and there’s so much fracturing in terms of ideology and politics and truth and what ideology is — to challenge everyone, no matter who they are, no matter what their ideas are. That’s really exciting and that’s the challenge we have as filmmakers, to create a world that can represent what we’re seeing online, right now. The emotional volatility of it.”

Assassination Nation premiered at Sundance, so Levinson already had some idea of how the film is being received.

“And how wonderful!” says Waterhouse. “That just excites me so much. I get really excited by criticism.”

“I think there are going to be people who really like it and people who don’t. There are going to be people who think it’s empowering and people who think it’s exploitative. It’s across the board. That’s the nature of it, and what’s exciting about it. That’s what’s challenging about films and art in general. People will come to their own conclusions. All I know is what we did as a cast and as a crew is to try to be inclusive of all our different experiences, irrespective of our gender, background, identity or where we came from. We made it on a really low budget, we swung for the fences and I’m really proud of what we made.” ■